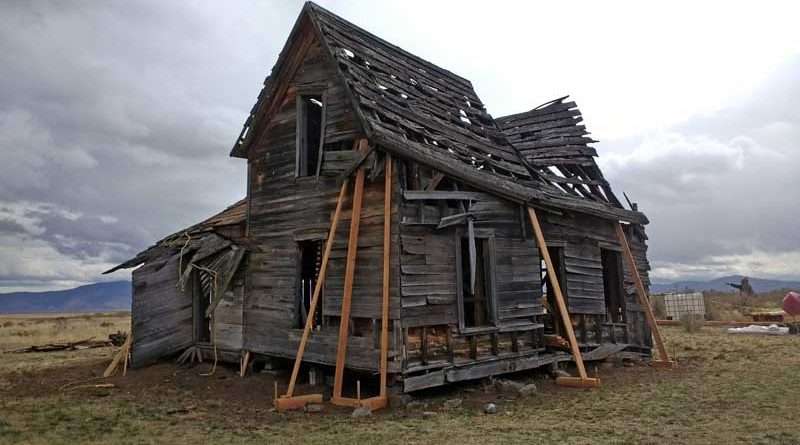 The Bulson House at the Sierra Valley Preserve is getting new support beams and roofing before winter. Photo by Gabe Miller

This fall, the Feather River Land Trust has undertaken several projects to restore historic buildings on the properties it owns and manages.

Work began in September to rebuild the crumbling foundation of the Olsen Barn in Chester, replacing footers and pouring new forms.

Ongoing repairs to the siding and foundation continue at the historic granary barn in Genesee Valley on the Heart K Ranch.

FRLT’s newest property, the Sierra Valley Preserve, features the iconic farm house that stands alone off County Road A-23. It is known as the Bulson House. Stabilization of the nearly 100 year-old abandoned building began in October and continues until mid-November. Major repairs are being done to the roof and support beams with the goal of shoring it up before winter.

The video was shot over the course of three chilly mornings in late October and features time-lapse photography at sunrise and interviews with FRLT staff Vanessa Vasquez, Nils Lunder and Gabe Miller, FRLT stewardship director.

Colby Elliot, videographer and producer of the film, is a Chester local and resident of Quincy. To watch the video, visit frlt.org. The video is also available on YouTube.

For questions about land trusts, land conservation or other inquiries, call 283-5758.

The video project has been funded in part by the U.S. Environmental Protection Agency under assistance agreement 8359031 to the U.S. Endowment for Forestry and Communities.