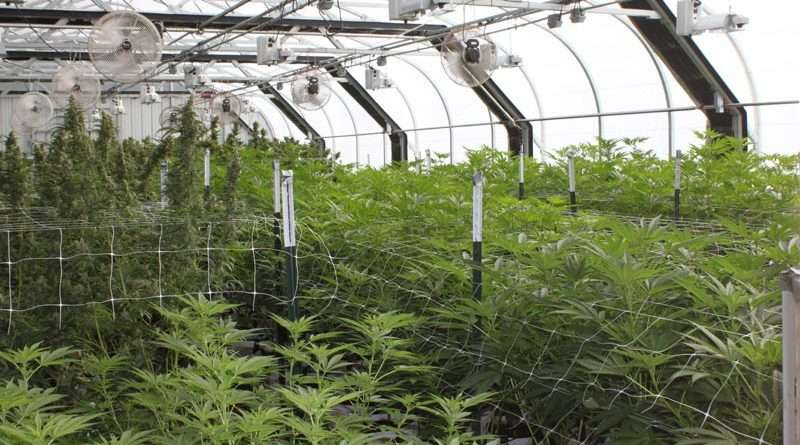 In the largest and most sophisticated cannabis grow since the cannabis moratorium began in Plumas County, code enforcement officers discovered close to 1,000 marijuana plants in two greenhouses and outside on a single property in the Genesee area near Taylorsville. Photos courtesy Plumas County Sheriff’s Office
News
October 2, 2018September 27, 2018 Victoria Metcalf, Assistant Editor

By far the most sophisticated cannabis grow to date, and with the highest number of plants discovered, cannabis code enforcement officers were at a public hearing Thursday, Sept. 20, to discuss the results.

Nearly 1,000 cannabis plants — marijuana — were discovered in two greenhouses and growing outside a Genesee residence earlier this month.

That was one of five cases put before hearing officer Lynn Strom. It was also left until the end of the hour-long hearing inside the supervisors’ chambers in the Plumas County Courthouse.

It was on Ward Creek Road that members of the Plumas County cannabis code enforcement team spotted marijuana plants in the Genesee area earlier this month.

When Plumas County Sheriff’s officers arrived to begin the code enforcement process, they met Griffin Donnelly who identified himself as a worker on site. The owner of the property was identified as Matt Vonderhaar, with a mailing address in Taylorsville.

One of the officers asked Donnelly if they could inspect his plants. Donnelly agreed.

What officers discovered were about 60 to 70 plants growing outside.

They also saw two greenhouse set-ups where more marijuana plants were in various stages of development.

The larger of the two structures held about 500 plants in stages of development from those with buds to immature plants.

The smaller greenhouse contained immature plants. At one point during the hearing, Det. Chris Hendrickson identified some of the plants as clones.

Hendrickson said there were another 250 plants inside the smaller structure.

Hendrickson said they conducted their business as required under the cannabis enforcement code. They posted one notice to abate all but the state’s legally allowed six marijuana plants per household. They also posted a second notice at the front door to the dwelling.

Another notice was mailed to Vonderhaar, Hendrickson told the hearing official. Evidence of all activities including photographs, was also supplied.

By Sept. 18, officials returned to the grower to see if abatement directions had been met.

Showing a photo of a pile of marijuana plants, Hendrickson said it looked nothing like what nearly 1,000 plants — even counting immature plants — should create.

He said they counted stems and determined there were approximately 320 plants in the pile.

Hendrickson said they didn’t see any of the small plants they had observed in grow bags inside the small greenhouse. To him it looked like plants had been moved from one greenhouse to another. They were coming across old stems and there was little evidence of newly cut stems they’d come to anticipate in other operations.

In a conversation with the property owner later that same day, Hendrickson told Vonderhaar that it didn’t look like they had abated all of the plants.

Vonderhaar told him to look in the garage and in one of the bedrooms inside the house. He asked the officers to return Sept. 19 for a final check. He indicated they would have everything abated by that time.

Hendrickson said they returned to the Genesee address the following day. This time they found what they anticipated on their first visit. Plants had been pulled and the operation had come to a halt.

Hendrickson said they checked the two greenhouses and they were devoid of cannabis. They also checked the garage that turned out to be the drying operation and it was empty of everything but equipment. Although they were given permission to check the bedroom, Hendrickson said they just peered in through the window and could tell the plants were gone. The sound of fans they’d heard on another occasion had ceased.

This time when Hendrickson and his team counted plants they came up with 927 stems — more in keeping with the number of living plants they’d originally estimated.

To the hearing officer Hendrickson said, “We feel that the property was abated,” although they weren’t upfront about it initially.

Strom placed a one day fine of $1,000 on Vonderhaar. He also owes for costs of investigation of the code violations.

Hendrickson said that when he told Vonderhaar that he would possibly be fined for one day’s violation, he said that the property owner said he deserved it.

Neither Vonderhaar nor his worker was present at the hearing.

Following the hearing, Deputy Ed Obayashi said he has seen a lot of grows in his time, but that was by far one of the most sophisticated. Obayashi heads up the sheriff’s code enforcement team.

In an aerial cannabis-spotting mission in August, Hendrickson said they spotted marijuana plants at 430 Highway 89 in Greenville.

Although James Monroe and Wilma Bradford of Salinas own the property, a man who identified himself as Glen Bradford told code enforcement officers that he owned the property. He later said he was concerned about what his parents would say when they learned he was growing cannabis on the property.

Hendrickson said they initially went to the property Sept. 6 and then revisited it Sept. 11.

Hendrickson said that Bradford did abate all of the plants except for six.

It was also on Sept. 6 that code enforcement officers, during an aerial run, spotted a grow of 20 to 30 plants in the Crescent Mills area near Highway 89.

The property was registered to Jason Mansfield of Forest Ranch.

When code enforcement officers visited the property Sept. 11, Hendrickson said they encountered a cable stretched across the driveway. They attached copies of the ordinance and abatement requirement to the cable, he said. Another was sent to the legal address.

There are no habitations on this property so no plants, not even the six allowable legal plants per household, could remain.

By Sept. 17, Hendrickson said that Mansfield said he abated the property although there was little or no evidence of where they went.

On Sept. 19, they flew the area again and there was no evidence that the cannabis was around.

In yet another code case, property belonging to James and Tammy Jo Norman of Holland Drive were seen having 10 to 18 plants.

Hendrickson said they posted the property Sept. 11 and mailed a legal notice to the owners.

On Sept. 12, Ms. Norman told one of the officers that the plants belonged to her son.

It was Det. Chris Fraser who visited the property to determine if abatement occurred.

Fraser told Strom that only five plants remained. “They did successfully abate the property,” he said.

No property owner or representative was present for any of the three previous cases.

In a fourth case, a man who identified himself as Nikoula Wanguard, said that he had abated his plants down to the allowable six, but asked for a continuance. He said he wanted his attorney present.

Strom allowed the continuance until the next hearing in October.

County Counsel Craig Settlemire agreed that Wanguard was responsible for only a fine of $1,000 and costs because he had abated his plants.

When Plumas County Sheriff’s officers began serving Plumas County in early July it was with the understanding that the Board of Supervisors had directed Human Resources Director Nancy Selvage to adjust paperwork to account for officers working in a new area not commonly handled by the department.

But when Sept. 11 came around and it was time to discuss these salaries and position changes with supervisors, Selvage told them she hadn’t had time to make the changes.

And county supervisors made no move to stipulate when HR should have those changes made or indeed if the salary adjustments were included in this year’s budget.