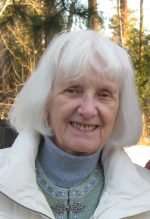 Leila Jigour died October 12, 2020 in Quincy, CA at the age of 95. She was born in 1925 to George and Elizabeth Mary Pigott in Omagh, Co. Tyrone, Northern Ireland. Leila had 5 older siblings who resided in the British Isles: her sister Isobel and brothers Marcus, Bob, George and Noel. They all preceded her in death.

Her oldest brother Marcus paid for her secondary schooling at a time when it was not common for women to continue their education. In her rigorous schooling she took four years of Latin and four years of French along with math, science, history and English. Her children benefited greatly from her education as she coached them in their lessons.

Leila met her beloved husband, the late John W. Jigour, on a blind date in Omagh during a blackout while Lieutenant John’s U.S Army Co. awaited orders for the WWII D-Day invasion. At that time she was employed by the local phone company. Leila and John were married in Omagh in March 1945 in St. Columba’s Church (Church of Ireland), where Leila was baptized and confirmed as a child. Due to the war they were separated for almost a year. Leila sailed from Belfast on the Henry Gibbins, a ship carrying war brides from Northern Ireland to the USA, on March 6, 1946. She continued her journey by train with other war brides from New York City to San Francisco. Leila became a U.S. citizen as soon as she could, in 1950.

During the early 1950s John told Leila that he was going to show her America. After the purchase of a small 14′ Terry camping trailer they took their 7 member family on many summer trips. They visited national parks, historic monuments and interesting sites throughout the U. S. and Canada, and made a special cross-country trip to Washington, D.C. Leila and John returned to Omagh several times in the 1980s and 1990s, and also visited England and western Europe.

After over 30 years in San Lorenzo, Leila and John retired to Kelly Ridge near Lake Oroville, CA, for 15 years before moving to Chico, CA in 1991. Leila moved to Quincy after John’s passing in 2006.

Leila was devout in her Anglican faith. She was a member of St. Christopher’s Episcopal Church in San Lorenzo, St. Paul’s in Oroville, St. John’s in Chico, and Christ the King in Quincy. She served on the Altar Guild at all these churches over a period of more than 50 years.

There will be a Covid-safe service limited to her children and their spouses at Christ the King Episcopal Church in Quincy, with the Rev. Matt Warren presiding. Interment will follow immediately after the service at the Old Quincy Cemetery, where John’s “Wild Irish Rose” will join him in eternal rest. Friends and other family members will be able to view the service live via the internet.

Leila was fortunate to reach the age of 95 with a sharp mind and good health, and she enjoyed her Irish Breakfast Tea to the end. She was proud to cast her vote in the 2020 November election, thus participating in our American democracy to her last days. She is loved and will be missed.

In memory of Leila, donations may be made to the Discretionary Fund, Christ the King Episcopal Church, 545 Lawrence St., Quincy CA 95971.