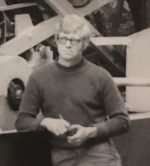 After a stint in the Air Force he worked in the then-new field of computers. While working at Digital in Maynard, Massachusetts, he was sent to Palo Alto to help install the computer system at Stanford University.

He loved motorcycles, especially Triumphs. He had a Bonneville and took Ellie on many camping trips to Canada with friends. John also loved to ski. Every winter he rented a ski hut in Killington, Vermont, with friends. He could also be found backcountry skiing down Tuckerman’s Ravine in the Mt. Washington range to fulfill his sense of adventure.

In June of 1967, he married Ellie Laport and became the father to her daughter, Debi.

On their many trips to New Hampshire to see Ellie’s family John developed an interest in well drilling. In 1973, the family moved to Alton, New Hampshire, and in 1975, John Streeter Artesian Wells came into being.

For more than 30 years he drilled in the harsh New England climate. One of his more memorable jobs was on Barndoor Island on Lake Winnipesaukee where he loaded his rig onto a barge for the job. He said it was both exciting and terrifying as the weather was so changeable on the lake.

In 2000, John and Ellie started a new chapter in their lives moving to Delleker to be near their daughter and her family. John worked for Dicken’s Drilling until his retirement.

After retirement John became the general manager of the Grizzly Water District in Delleker where he enjoyed a close relationship with the crew. As a pastime, he renovated an old Moto Guzzi motorcycle. Three weeks before going into the hospital he very proudly renewed his motorcycle license.

John will be missed for his quiet, stoic and kind nature, and his pipe. Ellie, Debi, Burkhard, Kira, Ben, Kiana, Kai, Aspen and his sister, Carol will hold him in their hearts.