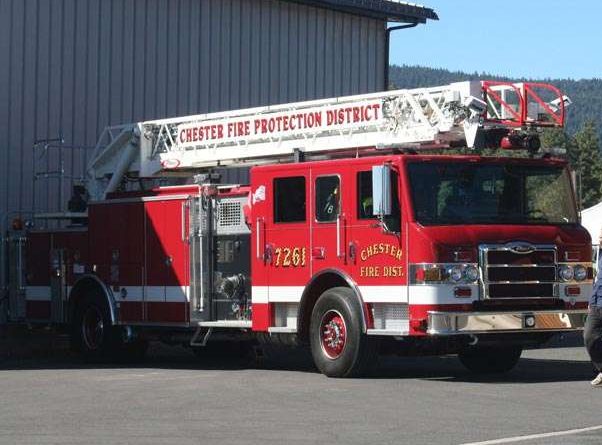 Want to learn more about your local fire department in conjunction with National Fire Prevention Week, when firefighters provide lifesaving public education in an effort to drastically decrease casualties caused by fires?

To forge an increase in fire awareness and prevention, the public is invited to attend the upcoming Chester Fire Department and CPUD Open House, scheduled Saturday, Oct. 12, from 10 a.m. to 1 p.m., at 251 Chester Airport Road adjacent to Rogers Field Airport in Chester.

Fire Prevention Week is observed this year from Oct. 6-12, in commemoration of the Great Chicago Fire, which began Oct, 8, 1871, and caused devastating damage and great loss of life.

The 2019 theme for National Fire Prevention Week is “Not Every Hero Wears a Cape. Plan and Practice Your Escape!”

In a typical home fire, whether caused from an inside source or by hot embers starting a blaze from an approaching conflagration, FEMA warns that residents may have as little as one to two minutes to escape safely from the time the smoke alarm sounds. “Escape planning and practice can help everyone make the most of the time they have to get out” before it’s too late.

Chester Fire Public Information Officer and Chester Firewise Committee member Karen Lichti is actively involved in expanding community education on how best to protect your home from the threat of fire, particularly in the North State where wildfires are all too prevalent.

“We’re tying Fire Prevention Week to our open house to show the community what a nice facility we have here in Chester,” said Lichti.

The Firewise campaign recognizes the importance of developing a fire escape plan and creating an emergency “to go” kit; practical knowledge that can have a life-saving impact.

Lichti noted that the same basic Firewise materials are also available on the National Fire Protection Agency website (www.nfpa.org) to help put together a safety plan.

The open house is a perfect opportunity to view up close the fire trucks on display and other emergency vehicles parked outside the firehouse bay, she said, as well as to meet staff and to ask questions related to fire safety and the station’s operations.

The three-hour event will include tables set up with brochures on the Firewise program, plus free smoke detectors courtesy of Town/Gown Project will be offered to those who might need them for their homes.

In addition, complimentary hot dogs will be served along with soft drinks.

Staff will be offering visitors guided tours through the crew’s living quarters at designated times during the open house event, she said.

There will be a youth coloring contest and an opportunity to hold a fire hose with streaming water, plus photo opportunities for the kids to don firefighter turnouts.

Red plastic fire chief helmets will be handed out to kids who — as in previous open houses —are welcome to explore the interior and exterior of the fire engines while under adult supervision, and to sit in the driver’s seat and take the wheel, pretending to be real firefighters imagining they’re on emergency calls. It makes for a great photographic opportunity for parents, too.

There’s a possibility that Smokey Bear may make an appearance during the event, posing with kids while parents take pictures.

Chester District General Manager Frank Motzkus is also expected to be on hand to greet visitors as a representative of the CPUD and answer any questions on how the district serves the public.

Interim Fire Chief Brian Layne said he hoped the event would draw people to consider joining as volunteers — which are in critical shortage countywide — as part of the Chester Fire Department team.

A number of fire agencies and medical partners are expected to participate during the open house, including CalFire, personnel from the USFS Almanor Ranger District, Enloe Flight Care, and representatives from the Plumas County Free Chipping program and the Lake Almanor Chamber of Commerce.

Also in attendance to answer questions will be Firewise Committee members, CPUD board members and Chester Fire Department volunteers.

For additional information on the open house, contact Lichti at 258 3456.