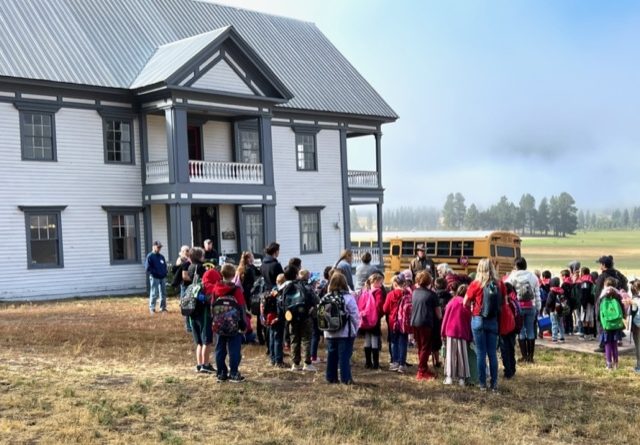 After a two year Covid layoff, the kids came back to White Sulphur Springs Ranch in 2022.   The previous School Days was in 2019, which was the last one in an unbroken string stretching back eight previous years to September of 2009. Unlike in previous years which only welcomed students from Portola, this year, third-graders from two different schools stepped back in time.  Over 100 kids from Quincy and Portola participated, helped by 16 teachers and 20 volunteers from each community.

Mohawk Valley Stewardship Council (MVSC) volunteers showed what the ranch and the community was like in the old days.  The event was organized by a five member planning committee. Six different educational stations were coordinated by Cathy Danielson and directed each day by Jim Maul.

Each day began with a group welcome and introduction by Bob Hughes.  The kids were then broken down into small groups to begin their tour of six different stations. First, was a tour of the old ranch house given by docent and volunteer chairman Judy Porep-Lullo, in period costume.  The kids then proceeded to five different educational stations. There was frontier cooking, shepherding, Maidu life, fruit box construction and washboard laundry.

The pioneer cooking station was manned by Cathy and Bob Danielson.  The kids ate Johnny cakes and made homemade butter. They learned about the daily life of a pioneer child.

The next stop was “shepherding” with real live sheep!  Anna Harvey and her crew from Harvey Farms showed the many products we get from sheep and the kids were allowed to see these animals close up.

In station number four, Janice Cross and Hillary Hughes led the kids up a local trail to show them Maidu Indian grinding rocks and local artifacts.

At station number five Janet and Leo Reihsen, with a bunch of volunteer “carpenters,” showed them how to make miniature wooden fruit boxes.  In 1919 the California Fruit Company purchased the land along Graeagle Creek in order to cut and mill lumber to build shipping boxes for fruit which they provided to growers throughout the State. The old fruit exchange still stands in Graeagle and the blue anchor California fruit logo can be seen on this stone building.  The students got to keep the wooden boxes they produced.

At the final station Janine Wolcott showed them how the laundry was done in the old days.  The kids hauled water and used old fashioned washboards.

Each day ended with the classes assembling on the deck for a group photo taken by Linda Cooley.

Living History School Days 2022 was partially funded by the Safeway Foundation. The foundation is dedicated to bettering the lives of people in the neighborhoods.  In a letter dated May 23, 2022, Wendy Gutshall of the Foundation’s Northern California Division, sent a check for $2,500 to Janet Reihsen of the MVSC. The MVSC depends on support like this to complete the work of restoration at the historic ranch site.  It is especially welcomed because this grant specifically supports the School Days program for third-graders in Portola and Quincy schools.

The mission of the MVSC is to serve as a community gathering place and a center for living history. The many hardworking volunteers hope that these students will be future supporters of White Sulphur Springs Ranch and that their children will be able to come here one day to enjoy the site and learn about the proud history of the Mohawk and Sierra Valleys.