The West End Theatre is the venue for a benefit concert for the rebuilding of habitat and humanity in Indian Valley and surrounding areas that suffered devastation last summer during the Dixie Fire. Heading up the effort is California songwriter, Corinne West. The poet and tunesmith has recorded five critically acclaimed albums and toured extensively throughout North America and Europe. Her 2016 release, Starlight Highway, received comment from Relix Magazine: “A voice of gold,” and The San Francisco Chronicle: “A singer with an angelic voice.” West said, “I basically had stopped recording, but when the Dixie Fire came I felt I wanted to do something. So I did what I do. I wrote a song.”

The song she wrote debuted in front of a crowd in the fall of 2021 at a First Responder Appreciation event held at the Drunk Brush wine bar in Quincy. “When she played the song acoustically at the event, the crowd went silent,” said Drunk Brush owner Riccardo Jacobus. “I was moved, as was everyone, and when she approached me about creating a foundation around the song I was all in.”

The affect on those in attendance is what motivated West to do more with the song. She envisioned a video about Plumas County and the fire to be shared to raise funds from outside the County to support the restoration of habitat and humanity. “That’s how it started,” said West. The idea of Lost Sierra Wings was born that night and the initial board was formed with West End Theatre owner Earl Thompson and Drunk Brush owner Riccardo Jacobus. Later, mega-organizer and doer of great things, Lisa Kelly, came on to join the board.

The intent of the foundation is to generate disaster relief for Plumas County through the arts. “Art is a very powerful way to get a message across,” said West. Utilizing her connections in the music industry and with the support of people desperate to help in some way, West gathered funds to make the recording. Accomplished musicians and technicians jumped in to offer their support and talents for the recording, Ricky Fataar on drums (Bonnie Raitt), and Pete Sears on bass, piano, B Hammond (Jefferson Airplane). “The engineer, the studio, everyone involved in the cut was very moved by the cause and showed up saying, ‘How can we help?’” said West. The recording is now complete and the videography is in process. The song Plumas Strong will be played live by Corinne West on May 15 at the Berkeley Theatre during Wavy Gravy’s 86th birthday celebration in front of thousands of people. “Other performers that night will be the David Nelson Band (New Riders of the Purple Sage), Zero, and other bands that are often involved in very good causes,” said West.

Funds are being raised by Lost Sierra Wings for the restoration of habitat and humanity. The group was formed specifically to tend to the needs from the Dixie Fire,” said Jacobus, “but we want to be up and running for the need.” The idea is to raise funds and give them to accredited and vetted groups that are doing needed work on the ground. The Common Good Community Foundation is given credit for making the effort possible. “They have been completely supportive,” said Corinne. The group is raising money for other groups to use. The format is similar to that of their umbrella foundation, Common Good, who has been raising money for more than a decade and giving it to worthy causes that have been vetted, reviewed, and selected by the Common Good Foundation board. “Dixie Fire is our focus for this effort,” said Jacobus, “but we anticipate there will be other situations that could benefit from our help in the future.” And, Lost Sierra Wings will be ready to lend a hand fundraising through art.

The first event from Lost Sierra Wings in the effort for Plumas County is a pair of concerts at the West End Theatre, Saturday, April 30 at 7:30 p.m., and Sunday, May 1 at 4 p.m. The shows will feature Corinne West’s music with the local talents of Indian Valley’s own Ken Cawley, and Joe Tomaselli, along with other guests such as Kelsey Kepple. The audience can expect a few surprises as well.

“Let’s not forget how strong we are, Plumas. We will come together in healing, song, and community,” said West. All proceeds will benefit rebuilding habitat and humanity post Dixie through vetted non-profits. Tickets are available at westendtheatre.us and concert attendees are invited to join West and accompanying artists for a reception and silent auction at the Drunk Brush wine bar from 4-6 p.m. before the Saturday, April 30, show. Folks can present concert tickets at the Drunk Brush to receive a complementary beverage. The event is sponsored by The Common Good Community Foundation, a 501© non-profit organization.

We are the feather folk

All the colors – all the spokes

This is the land we love

Was it just a little spark?

Did it glower in the dark?

Dixie what were you to do?

All the fuel we left for you

Ah the Dragon is drawing near

On the wind you ruled the sky

Our land was so damn-bone, bone dry

Fire Fire :: This is our Home

What did we learn from this

The power of tenderness

Looking out for you and me

It’s a Blessed way to be

Lend your body Lend your mind

Give your money – give your time

When the Dragon’s at your door

Hardship kicks you – to the floor

Raise your face up to the sky

All our love – don’t deny

For you are not alone

There is power in our song

What a strong web we weave

When you and i believe 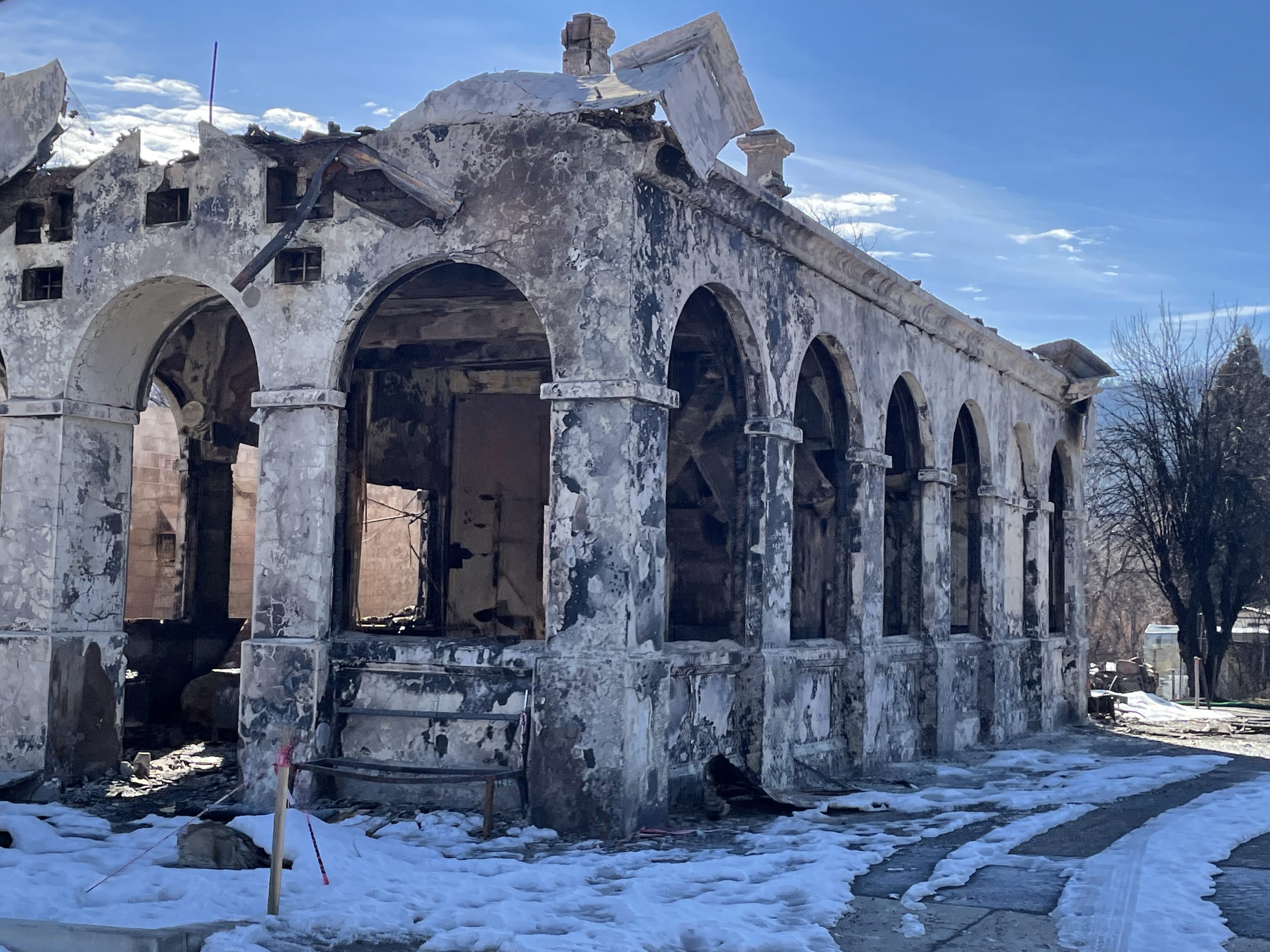