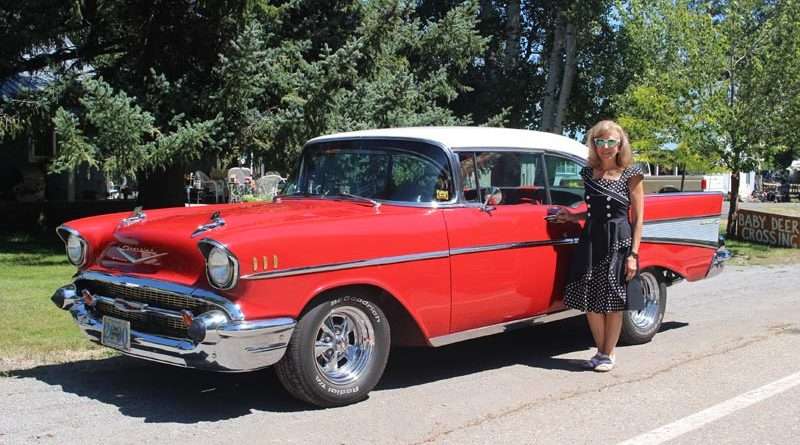 A Chester resident all her life, Merriman inherited the vintage automobile from her late husband Bob, which they originally bought from a seller living in Reno for $17,500 back in 1999, which at that time still needed some major work done.

Today, the car finish features a custom Cadillac red with a white pearlescent-sparkle roof, painted locally in 2010 by Jeff Dillard at Chester Auto Body, she said. The car boasts a newly mounted 383 cc, 420 horsepower engine with just 3,000 miles on it now.

She said the upholstery and interior carpet was custom installed by Don Higgins of Higgins Custom Upholstery in Chico. Mechanic Steve Young installed the automatic transmission.

The 1957 Chevy Bel Air’s design is inspired by a bygone era when the space race motivated engineers to create a look that included a set of tail fins that mimic the appearance of rocket ships that were blasting off from American space ports.

As a fan of classic vehicles herself, Merriman said, “I’m just trying to honor my husband’s memory and enthusiasm for this car. … I feel closer to him when I’m driving it too. … He would have wanted me to carry on by entering it in different car shows,” where they had both in years past enjoyed exhibiting the Chevy at the Susanville Street Rodders annual High Country Cruise, Kool April Nites in Redding, Highlands Motoring Festival, Hot August Nights in Reno and of course in the Street Rod Extravaganza in Chester.

“It’s always fun to go and talk with the other car enthusiasts, show off a bit and sway with the music,” she shared.

The vehicle has won a number of plaques over the years for its awesome style, she noted. She recalled that her dad liked to race what were then newer model cars in the ’50s and had won several trophies.

Merriman remains diligent in maintaining the Bel Air, utilizing locally owned auto services for repairs and maintenance, and keeps the car garaged most of the time with blankets covering it to further protect the paint surfaces.

Merriman mentioned that she belongs to an informal group of local classic car aficionados that meet for coffee every Friday morning before cruising around during the summertime.

The car is a real head turner, she said. “It’s a lot of fun to drive around town on those special occasions, … People wave and give a shout out as I drive by. It’s really exciting.”