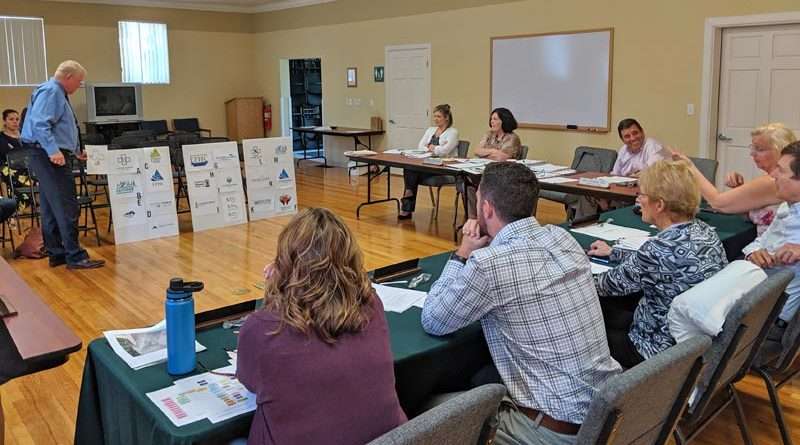 Chairwoman Gail McGrath opened the meeting, with a roll call vote and unanimous approval of the consent calendar.

“It’s wonderful to see things humming along up here, my word,” McGrath said with a smile, during board chair comments. McGrath then introduced an organizational chart, and with no further comment from the board, moved smoothly into the Auxiliary report.

Janie McBride reported that between the months of May and June, the EPHC Auxiliary had noted gross sales at the Nifty Thrifty to be down more $4,000. “Our donations, however, are really up,” McBride said. “Every day is a different day.”

“Our Memorial Fund has $6,920, and that money is used for scholarships,” McBride stated. “Our volunteer hours at the Nifty Thrifty for the month of May were at 839, and in June it was 737.5, so it’s gone done due to illness and lack of volunteers. We can’t run the store with less than two people. Almost 19 hours were also spent in the lobby of the hospital.”

Chief of Staff Dr. Eric Bugna, MD, reported on the topic of drug abuse and overdose, saying, “Apparently, the CDC estimates that overdose deaths have decreased by 5 percent between 2017 and 2018. The thought is that this is due to prescription activity changes, but the vast majority of ODs are still coming from corner drug stores.”

Bugna went on to state that locally, the clinic is “doing great,” and also complimented the paving work being done on campus.

The focus then shifted to Dr. Paul Swanson, who agreed that there was a huge change in the community over the last five to seven years in the matter of opiate abuse, before moving into a report on finance.

Swanson stated that the trend of an upward swing was continuing, and thanked new Chief Executive Officer Todd Plimpton, along with the rest of the staff, for driving the momentum and positive change. “I think we’re seeing the fruition of that in numbers, with the highest ever revenue for the month of June and solidly in the black, excluding all intergovernmental transfers,” Swanson said. “The numbers all look fabulous.”

McGrath then moved on to discuss Resolution 276, soliciting bids for a Submersible Turbine Pump (STP) leak detector and day tank upgrade project, and proposed to award the bid to L.A. Perks Petroleum Specialists Inc. in the amount of $75,917.

The underground leak detector is required by law, and after noting that the bid would be going to the only contractor available to take on the project, as well as discussing the high cost of the project, the resolution passed by unanimous roll call vote.

Chief Nursing Officer Sharon DiNicholas then said, “Nursing is busy as always, and that’s good. We had seven patients on the acute floor this morning.”

DiNicholas went on to report that the Portola Skilled Nursing Facility is at capacity with 27 residents, and Loyalton’s SNF is currently at 31 residents, with a plan in motion to add nurses to the staff in order to bring the Loyalton facility capacity up to 39. “There are 11 people on the wait list, and only eight beds,” DiNicholas added.

It was also noted that progress had been made on the acute floor, with the purchase of four new Versa airbeds, as well as bedside commodes, and a bid out for two new monitors that are needed.

“Our new ambulance manager started on July 8, and he brings a lot of knowledge on the emergency preparedness and education fronts,” DiNicholas said.

DiNicholas also discussed ambulance protocols and explained that the new manager was on call 24/7 with his radio, in addition to explaining that the area was always fully covered between EPHC and outside help such as REMSA if needed. “There is backup available if there were to be a huge event,” she added.

DiNicholas wrapped up her report as she touched on the nursing management team’s progress in working on policies and procedures, as well as the ongoing efforts to recruit staff such as a full-time physical therapist and was also enthused about the Lipincott software. “It’s a great time to be here,” she smiled. “We’re one team, here to serve our community.”

Clinic Director Rhonda Grandi then spoke, noting that she had submitted an application to add a project to the final year of the PRIME project, regarding ongoing chronic pain management.

“We’ve been meeting in workgroups and collaborating with the county to ensure that we can institute a standardized program,” Grandi said. “If we could get additional funding, it would make sense.”

“We’re still holding steady at just under two new patients a day,” Grandi went on. “We have served 260 total new patients since Jan. 1 as of today, and last Thursday was Dr. Williams’ last day at EPHC. Her patients are being transitioned to new providers.”

The Pine Street Clinic closure had been moved up to Aug. 1, with Beth Hill, PA-C seeing patients starting Monday, Aug. 12, at the main clinic in the same format used currently at the Pine Street clinic.

With the vacancy of the human resources director, Plimpton commented that staff would be reinvigorating the search for a new HR manager at the beginning of August.

Chief Financial Officer Katherine Pairish then reported on the June financials, saying, “Eastern Plumas Health Care posted gross revenue in the amount of $3,796,725. This is the highest gross revenue we have ever posted, and this is a direct result of improved patient care.”

“Those patients for whom we can care for are being treated in our facility rather than transferred out, and we are filling the beds in the skilled nursing facilities, so families no longer have to travel to visit their loved ones,” Pairish said.

Net income for the month of June was $663,017, which included $568,000 received for Medicare lump sum adjustments as a result of the EPHC interim cost report.

CEO Plimpton noted that the painting contractor was outside at the moment, preparing to paint the back and deck of the SNF, as well as the clinic build out.

Plimpton also noted that it was neat to see what the staff is doing from day to day on a different level, and Rick Boyd of IT noted that the recent Centriq update was complete, and that a major improvement for providers had been made to the software used in clinics.

Boyd also noted the recent tackling of system issues, and said that Monday morning, 10G fibers will be connected to all buildings and will tie in the public wireless through the next week. “We had to replace our wires due to the 10G,” Boyd said.

Plimpton noted that for the past few months, Boyd and his team had been tackling the issue of obsolete computers, with a goal of replacing all old computers with up to date equipment by Jan. 1, 2020.

Laboratory Manager Bill Carlson also had a couple of comments, saying “Everything in the lab is state of the art and functional, and hooked up to the computers. We were discussing billable charges, or clicks, in the lab, and as of March 1, the numbers went off the scale up at 3,400 clicks per month.”

Carlson also noted a recent inspection, saying, “My staff did a phenomenal job. The inspector were here 10 years ago, and on this visit, he said, ‘This is how it’s supposed to be.’”

At the end, there was only one minor deficiency due to an expired chart that hadn’t been pulled. Carlson also noted that due to the increase in engagements, the lab was also keeping costs down in loss of reagents. “People are coming from Susanville to get their labs done,” Plimpton commented. “Wait times are also so minimal,” McGrath commented.

It was noted that the radiology department had been experiencing the same increase, with an inspection showing no deficiencies.

Director of Planning Operations Stan Peiler reported engineering is busy, highlighting projects that he is tracking, and noted that phase one of the parking lot was complete, with phase two coming in for concrete work, and phase three to take place around late August.

“Phase three is when we will slurry seal the whole campus, including the main road,” Peiler said. “We’ve knocked out about 30 trees around campus, we’ve pulled the stumps. This is a very good thing — we’re thinking ahead to the future.”

Peiler stated that Loyalton is looking at hiring stucco contactors to repair damage, as well as replacing all of the doors. “We’re moving forward and glad to be a part of the change.”

Plimpton went on to speak about the costs associated with traveling nurses, as well as a fresh look at hiring philosophy. “We bring them on and try to translate them to long-term employees,” Plimpton said.

DiNicholas added that the best thing that could be done is offering housing to traveling nurses. “You get tax-free money to travel for your housing as a traveling nurse,” DiNicholas said. “Housing is key —  we currently have three rooms and are looking at more.”

Plimpton also addressed the next goal of updating the emergency department and planning ahead into the future beyond the next five to six years.

“We have a great partnership and warmth with the city, and things are going well on Hospital Hill,” Plimpton said. “The last 35 feet of the road at the bottom is owned by the city, and we’ve discovered that the ditch underneath the church is problematic, so we will need to figure out what that looks like before the next flood event; we’ve got to be stewards of our own manifest destiny.”

Plimpton went on to state that the city of Portola would be giving responsibility for the road known as Hospital Hill to EPHC, with the note that EPHC will not be responsible for the ditch underneath. “Just the surface maintenance on the sidewalk and the road,” Plimpton added.

Conversation centered briefly around the accessibility of Hospital Hill, with Plimpton noting the difficulty of pushing a wheelchair to the top of the road.

“We’ve got to fix that! We need to put a sidewalk and lights in there to better serve our community,” Plimpton said emphatically. McGrath suggested that thought be given to help transport those in need to the top of the hill.

Ryan Nowling noted that he had found an eight- to 10-person van to potentially be used as a shuttle, and that he was currently engaged in negotiations.

Nowling also noted the work being done to provide emergency room physicians with new contracts, and that the annual golf tournament would be held Saturday, Aug. 31, at Plumas Pines.

Plimpton went on to touch on the 340B program, and initial discussions raised with a goal to working with the Village Pharmacy in a collaborative fashion in the future.

The board of directors went on to discuss logo options laid out on white boards, with the need for new uniforms becoming urgent. Some options struck board members more than others, and some suggested a choice that would be clean and simple.

After much discussion, open session closed and was followed by a closed session. For more information or to see the agenda, contact Eastern Plumas Health Care at 832-6564 or visit ephc.org.