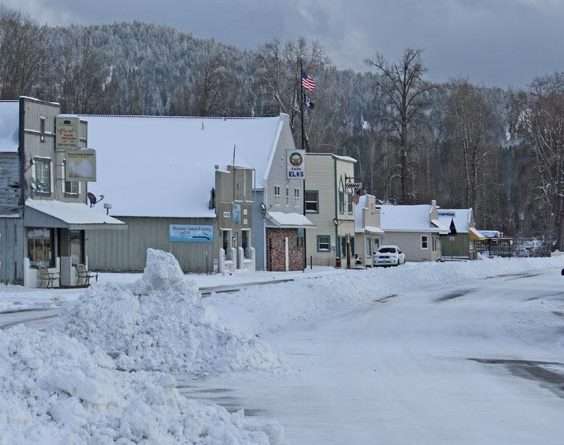 Snow is coming and city, county and state crews are preparing. Local residents can help the snow removal process by removing their vehicles from the street as in this file photo by Gregg Scott.
News
January 26, 2021January 28, 2021 Editor

This morning, Tuesday, Jan. 26,  Portola’s Public Works Director Todd Roberts and his crew were busy preparing for the snow that’s forecast to arrive tonight through Friday.

“We’re fueling everything, chaining everything and making sure the plow blades are attached,” Roberts said. “We are getting ready for a massive amount of snow.” Roberts had just received the latest updates from the National Weather Service, which predict a foot of snow for the city, but 2 to 4 feet for the Lakes Basin area.

Though the storm covers Northern California and Western Nevada, Roberts’ main concern is the 50 miles of roadways that must be plowed within the city limits. He and his crew of three will be kept busy.

Roberts shared that plowing the city streets isn’t like running a snowplow down Highway 70. Once the roadways are plowed, all of the intersections must be cleared, and the snow removed.

And while residents are grateful to have their streets plowed, they also get angry — mainly about the berms that are left behind. He and his crew, as well as the outside help that is sometimes needed, have been yelled out, spat at, and had equipment hit by snow shovels.

He and his crew aren’t alone. A major snowstorm inevitably leads to a round of complaints to county supervisors as Plumas residents also react to berms, the timeliness of the plowing and other issues.

But residents can help — both in Portola and throughout the county.

While some residents know and respect wintertime snow removal rules, some haven’t acquainted themselves with them or simply ignore them.

Plumas Count Public Works reminds everyone that during and after snowstorms residents are legally responsible for where their vehicles are parked and where they put their snow.

Plumas County residents are not allowed to park their vehicles on county roads, on the city of Portola streets, or streets anywhere in the county, and on state highways. Crews require that all vehicles be parked off the streets, roads and highways to allow snowplow drivers to do their jobs. In short, residents must find another place to park other than in front of their houses in the public street.

Vehicles — especially RVs and trailers — that are parked on the street make snow removal that much more difficult and they contribute to the narrowing of traffic lanes, making winter driving tougher on everyone. More than just a big lump in the snow, such vehicles are a hazard to motorists and are subject to damage from snow plows and other vehicles.

Plumas County Code Section 4-3.502 and the California Vehicle Code CVC 22510 prohibit parking a vehicle on the road or street right-of-way, or in any way hindering snow removal. This means that no one is allowed to park on or along the pavement, at the end of a street, around a cul-de-sac or on the shoulder of the road during snow removal.

These are the locations that are needed for snow storage. If individuals need to park on the street short term, it’s allowed, but they are advised to keep in mind that the vehicle needs to be out of the way when the plow comes by — especially after dark — and they can’t park out there at all if a lane is blocked

Violation of the codes can mean that an offender can have his or her vehicle towed away. The expense is born by the vehicle owner.

Those who don’t have a driveway, garage or somewhere to more conveniently park a vehicle to plan ahead. Get a parking spot off the street and make sure it’s accessible when it storms is part of that planning.

This law applies to vehicles, but it also applies to trailers, boats, RVs and disabled vehicles as well.

The winter parking law also requires removal of basketball stands that allow players to use the street as a court and firewood and other things that might block the right-of-way. If the snowplow can hit it, it needs to be moved/

Where to place the snow is also a prime concern for not only public works employees, but neighbors as well. Whether using a snow blower, or shoveling or plowing it from walkways, driveways or private roads, it doesn’t belong on the street. The act of putting snow or other materials on a public right-of-way such as the street or a public road is a violation of California Vehicle Code 23112 and Section 724 of the California Streets and Highways Code. It is considered a misdemeanor.

When public works snowplow operators attempt to plow through a pile of snow, most of it will become part of the berm in front of that property or a neighbor’s. It could aslo stay in the street as an icy, dangerous bump that could contribute to an accident. Therefore residents are encouraged to keep the snow on their own property.

For more information, contact the Plumas County Department of Public Works at 283-6268.