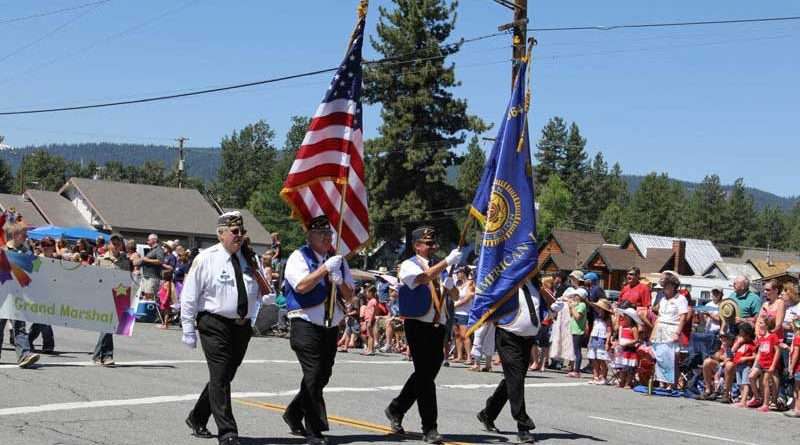 The American Legion Color Guard from Harry Doble Post 664 leading the Chester 4th of July Parade is a traditional site in the holiday festivities. The post has been at the forefront of the parade as in this photo from 2017. Feather Publishing file photo
News
October 1, 2017September 27, 2017 Gregg Scott, Staff Writer

The Sept. 18 meeting of Harry Doble Post 664 of the American Legion resulted in the successful start of member efforts to renew the group to its former condition as a support to veterans and the community.

The post has been pursuing a quorum of members to vote in a slate of officers for several months in order to maintain the unit’s eligible status with the American Legion, Department of California.

At the September meeting, there was not only a quorum of members but also three new members submitted applications.

The first agenda item was to elect a certified slate of officers for the 2017-18 year.

Harry Doble Post has a long legacy of serving veterans and the Chester community.

The post was originally chartered Sept. 28, 1947, and is named after Corporal Harry A. Doble.

Doble was the first soldier from the Chester area to die in World War II. He was killed in action July 8, 1944 in Northern Italy.

Politics and generational philosophies have historically taken a toll on veteran’s organizations from time to time and Post 664 is no exception.

This post had some tough times during the Vietnam War era and was unchartered for several years.

In June 1988, the post was re-chartered and once again began to fulfill the Legion motto “Veterans serving Veterans.”

“Even though we have had some down times lately, it is refreshing to see some veterans who are willing to put legs to their words and actually help other veterans,” said one long-time member.

Plumas County Veterans Service Officer Jimmy LaPlante pointed out he was there to aid the post in any way he could and started out by talking with those in attendance about many new benefits available through the Veterans Administration.

The evening’s discussion continued with ideas about events and services, both traditional and new, that the post would like to plan.