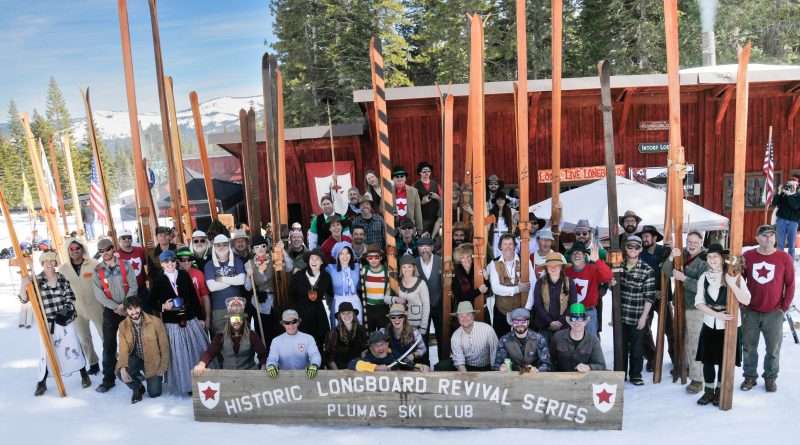 A familiar sight at the annual Longboards races, which are returning after a two-year hiatus. Photo submitted
News
January 9, 2022January 17, 2022 Editor

It’s official! The dates for the 2022 Longboard Races have been announced; new longboards are being crafted and legacy boards taken down and dusted off from their places of honor over fireplaces and entryways. The elusive and highly coveted dope recipes (ski wax) are being concocted and tested; snow removal and race course grooming are happening now! The first event of the season is Sunday, Jan. 16. (See flyer below for all of the dates and more details.)

Held at the Plumas Eureka Ski Bowl, this renown event is free to the public and all are welcome, but come prepared – this is not your plush Alpine resort experience or for the faint of heart. The terrain is snowy and the ground uneven, the competition is fierce and the grit and determination are real!  With all that said, we will have a delicious grill, thanks to the Eight Armed Chef team, a warm hearth inside the historic Intorf Lodge, and Music and dance to delight the Soul, ala the Feather River Jubilation Orchestra!

As always, the longboard race and its competitors are the highlight of the event. As they don their period apparel, adorn themselves with past trophies, keepsakes, medals and mementos of races past and bid each other good luck, they are eying the best track to get them down the hill in the fastest time for the few moments of glory atop the winner’s podium. The Ski Club members, with the help of our beloved Clampers and hearty cadre of volunteers, are ready to shovel, tow, post flags, draw finish lines with bright colored jello, bang on gongs officiate the competition to delight the onlookers!

This year, following a 2-year hiaitus, marks the 30th anniversary of the Revival Longboard Races which began in 1992, thanks to the hard work of the resilient members of the Plumas Ski Club (lovingly known as the Greybeards) and the strength and determination of the Blackbeards (Gen X,Y and Z). The Club has persevered over the last 30 years, sustaining the races for the enjoyment of the community as well as to honor a rich local history of ski racing.

“In the 1800’s, ore miners held ski races, on 14 foot longboards, near current location of the ski bowl. These were the first organized downhill ski races in North America.  After that, ski clubs would formed a professional race circuit in the “Lost Sierra ” region and in 1950- the Plumas Ski Club formed. In 1955 a rope tow was brought to the Ski Bowl and in 1957 the club purchased a used military half-track to tow skiers from Johnsville to the ski hill with a rope. Come 1958 the club employed an old shed as a warming hut with a capacity was 10 people at a time.  Intorf Lodge was built in 1965.” ~ https://www.plumasskiclub.org

The historic and well known slogan “Long Live Longboards” is the mantra and “Dope is King” pertains to the coveted secret of the natural ingredients applied as wax to the bottom of the skis – the stuff that makes a champion!

In preparation for racing, Longboard Making classes were held, courtesy of Feather River College’s Community Education Program, at Portola High School.  Planks of Doug Fir were transformed into Longboard skis under the tutelage of experienced racers and through generous wood donations from Sierra Pacific Industries. Students honed their skills and their skis, as they used a combination of traditional hand tools and the occasional modern assist. Look for these skis on the course this year and definitely ask a racer about their skis, there is a great deal of pride in each pair.  Don’t have skis?  Don’t worry!  If you dare to race, you can rent a pair of club skis!  You will need a pair of sturdy boots (not snowboarding or ski boots) as the bindings consist of a leather strap and thick twine to lace you in.  Like we said, not for the faint of heart!  Registration begins at 10 and concludes sharply at 11:30. The number draw brackets is at 11:45 and the races commence at high noon!  Rules?  Yes, there are those!  Required is historic attire, leather boots, authentic dope wax only (we have this available for your use), and absolutely no spittin’ or cheatin’!  Entry fees include:  Club membership – $20 (required), race fees – $20 and ski rental – $20.  Even if you don’t want to race, club membership is encouraged for all!

In addition to the Revival Longboard Races, the Plumas Ski Club has been hard at work! In concert with the Plumas National Forest, the club is garnering salvage logs from the Dixie Fire to rebuild the Intorf Lodge deck.  All work will be done on site including milling and planing. The California State Parks is working with the club in an effort to create a long-term contract assuring the future of Longboard races, the Lost Sierra Hoedown and hopefully one day, a public ski hill for all to enjoy.  We have also been granted permission to have a porta potty in the bottom parking lot so you won’t see much yellow snow this year!

Thanks to the Pondside Nesters of Quincy, there will be a raffle for the Intorf Lodge!  Well, a replica of the lodge will be raffled!  Tickets are $5 each or 5 for $20.  The beautiful birdhouse will be on display at the lodge and the drawing will take place on site after the race. A replica of the lodge, also created by the Pondside Nesters, has been graciously donated for display with details forthcoming!  For information on races or to volunteer, please contact club President Don Fregulia ([email protected]) or VP Greg Hinds ([email protected]). 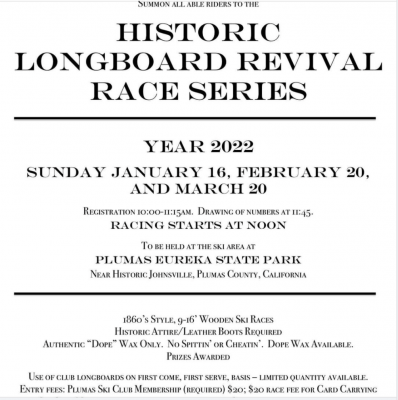