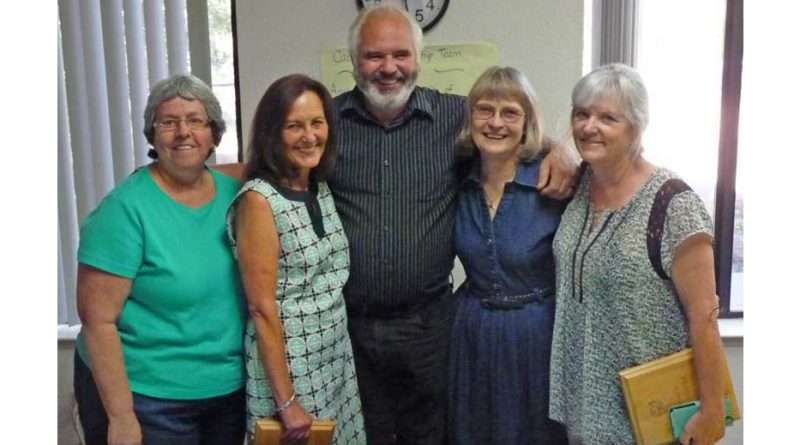 Who are some of the unsung heroes of our community, people who work for the common good for years outside the glow of the public spotlight?

In that vein, five long-term employees of PUSD were honored at their retirement on June 28 for their contributions to local children and the school district.

The five honorees included a special education aide; a director of operations, maintenance and transportation; two school nurses; and a school secretary.

Nine employees retired on June 28, but only five were present to be honored.

Nancy Hemsley, introduced as “Nurse Nancy,” was the first to be honored. Hemsley, lead nurse at PUSD and nurse for Portola schools for the last 12 years, has been a nurse for 49 years.

student of Thompson’s and a 2017 graduate from Portola High School.

Thompson told the audience that it had been a wonderful 37 years working with students. She said, “I love my job because of that man right there,” pointing to Marquette, “Thank you, Jackson.”

Lori Marquette, a teacher at Portola High School, thanked Thompson at the reception for the work she did with her son Jackson.

Like Hemsley, Jody Johnson was introduced as “Nurse Jody” by Laura Blesse, director of both special education and pupil services for PUSD.

Blesse said that Johnson had been at PUSD for 17 years and a nurse for 40 years. She testified that Johnson’s devotion to student health as a school nurse was incredible.

Blesse noted that Johnson was known as “Field Trip Nurse Supreme” by her colleagues.

Porter said that in 1998, the current secretary at Indian Valley Elementary School quit and he hired Rubke to replace her. Porter remarked, “It was one of the best decisions I ever made as principal at Greenville Elementary School.”

Porter testified that he was the envy of all other principals in the district because of the beautiful manner in which Rubke decorated the offices at Indian Valley Elementary School. He bragged, “Even the bathrooms were the best in the district.”

Porter noted that in 2005, due to budget cuts, Rubke was asked to take over the responsibility of being the secretary for both Indian Valley Elementary School and Greenville High School. He noted that this was not a reasonable expectation and that Rubke bore the weight of that decision.

After Porter finished, Rubke made two comments. First, she agreed that it wasn’t possible to do both jobs and so after a period of trying she approached the board to let them know that. To their credit, Rubke pointed out, “The supervisors listened.”

Rubke then added, “It has been an honor to work at our public schools.” Rubke said about her job, “I love that every day is different and I get to be ‘School Mom’ to great kids.”

Ken Pierson, retiring director of maintenance, operations and transportation, has been the rock that has anchored those departments since budget cutbacks in 2015 left him with multiple responsibilities.

Pierson worked for the school district for 22 years. He wanted everyone to know, “Our departments are behind the scenes but we are still for the kids.”

School Board President Leslie Edlund seconded what Pierson had to say about serving children. “When people send their kids off to school every day,” she said, “they don’t think about all the parts and pieces it takes to run a school. Some of those ‘parts and pieces’ are here with us today.”

A typical day in the life of PUSD school “Nurse Jody” Johnson. Adapted from Laura Blesse

Visualize a typical day for “Nurse Jody” Johnson — students are attending classes on each of four campuses in Quincy. Two classes have scheduled field trips.

Nurse Jody realizes that this is an impossible challenge for one school nurse to cover on her own, but there is no one else available. Not to panic, Nurse Jody just rearranges her day!

Soon, however, Nurse Jody jumps into her car and drives to the Oakland Camp bridge where she hopes to meet up with one of the classes on a field trip.

There, a couple of college kids, helping to supervise the students, ferry Nurse Jody across the creek in a boat. Together, they run through the mud to chase down the sixth-grade class.

However, by the time they reach the class, it has moved to the other side of the creek.

With lightening speed, Nurse Jody figures out a way for the child with diabetes to take her own blood sugar level and report those levels back to Nurse Jody.

Nurse Jody then computes how much insulin this child needs by calculating what the child ate for lunch and how much energy the sixth-grader has expended during this field trip.

With a loud, but professional voice, Nurse Jody yells across the loud rushing waters, telling the child the proper amount of insulin she needs to take.

Not quite. There is still a seventh-grade student back at Quincy High School that needs insulin before lunch.

A quick look at her watch, followed by a quick boat ride across the creek again and a quick drive to Quincy High School (following speed laws of course), Nurse Jody then jumps out of her car and runs to her office to check in with the waiting seventh-grade student.

Now everything is fine!

Just a normal day in Plumas County for Nurse Jody.