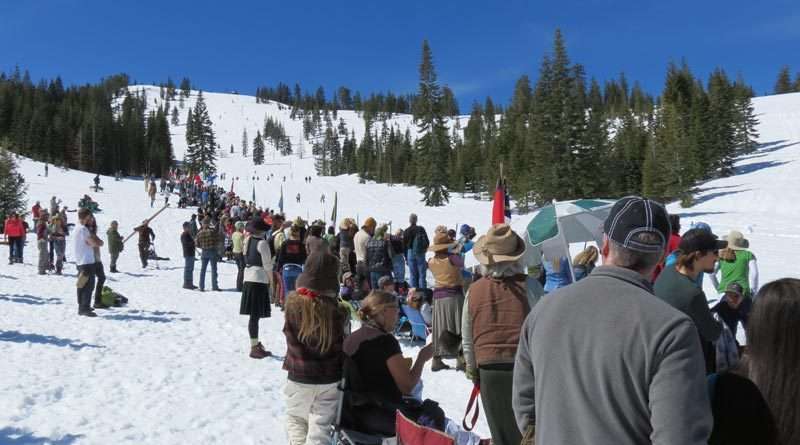 The World Championship Longboards race held at the historic Johnsville Ski Bowl on March 17 is a wrap, with 38 men and 12 women racing to take home the championship belt and championship title.

Race day couldn’t have been more inviting, with clear blue skies and spring-like temperatures bringing out attendees in droves. The final race of 2019 also happened to coincide with St. Patrick’s Day, heightening the festivities and bringing a sea of green hats, scarves and jackets to the ski bowl.

Hundreds turned out for the annual event, with many traveling from Nevada and beyond to cheer on the longboard racers.

“State parks estimated between 800 to 900 were in attendance at this race,” said Don Fregulia Jr. of the Plumas Ski Club. “The turnout was comparable to the Lost Sierra Hoedown.”

It took community collaboration to bring the event together, with a heavy blanket of snow needing to be cleared and the ski hill groomed leading up to the event.

“Plumas-Sierra Rural Electric had their snow cat up there the day before the race and worked from 9 to 5 to clear snow away from the deck and assist with grooming, and we’re really thankful,” Fregulia noted. “We also had a small group of younger volunteers up here chipping away at the snow with shovels over a course of many days.”

Sierra Buttes Trail Stewardship donated the use of a van as shuttle for the entire event day, and volunteer Shane Koskinen drove the shuttle to and from the lower parking areas throughout the entire day. “I was extremely busy all day!” Koskinen noted.

Fregulia also stated how grateful the Plumas Ski Club is for the assistance of the Plumas County Roads Department, praising their efforts to get the roads leading up the ski bowl cleared for attendees in a timely fashion.

“We also want to thank Moon’s for bringing the snack shack back to the race, and the Brewing Lair for supplying beer,” Fregulia said. “Also, many thanks to Max Breedlove and his wife Evelyn for taking the time to hand-craft the award medals that winners receive each year, as well as to Joanne Wilson for being available for first aid if needed.”

The Plumas Ski Club looks forward to the next races to come in 2020 and invites all to join in the festivities at the upcoming Lost Sierra Hoedown to be held at the ski bowl Sept. 19 through 22.