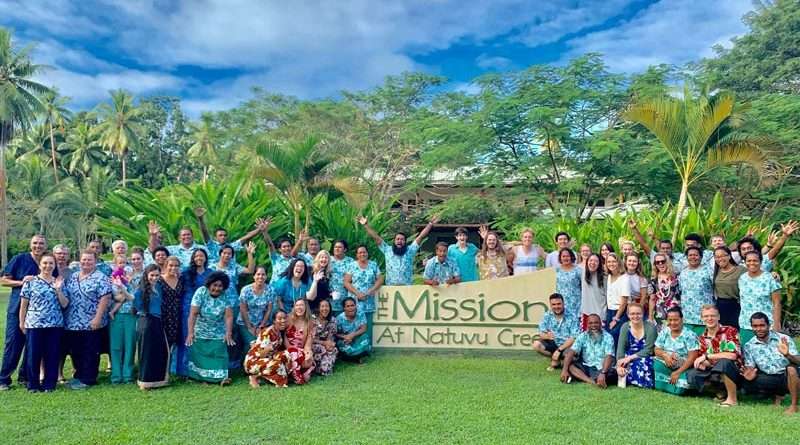 From left is one of the Fiji locals who works at the clinic; a volunteer student from Pepperdine University, Chris Frias; Dale and Nina Harris; and Debbie and David Whiting as they get acquainted with the regular staff. Photos submitted
News
August 28, 2019September 3, 2019 Victoria Metcalf, Assistant Editor

It was an adventure that put a smile on the faces of those who traveled all the way to the Fiji Islands and for those islanders who participated in special opportunity dental clinics.

Quincy dentist Dale Harris, his wife Nina and their staff made the long trip to paradise last May to enjoy the scenery, but more importantly, help others. “This was our fifth trip to Fiji,” Nina Harris explained as she prepared for a presentation at her church the Seventh-day Adventists in Quincy.

It was just a year earlier that Harris and her family were on a scuba dive vacation in Fiji when she learned of the Mission at Natuvu Creek. “I heard about this clinic, so I called them out of the blue one day, while on vacation, and said we are a family with two dentists, two physicians, one nurse, one dietitian and one hospital administrator,” she remembered listing the careers of just the people in her family.

“We would like to look at your clinic and see if we want to come and volunteer sometimes,” Nina remembered saying.

The people at the clinic seemed excited to have the assistance and picked them up where they were staying at The Remote Resort — about a 10- minute boat ride away. It happened to be the same afternoon that Nina made that call.

They “gave us a grand tour of the clinic,” she explained. “The staff greeted us with singing as we arrived.”

And with the warm welcome, Dale Harris asked, “What is your biggest need?”

What the Harrises and their family of 10 learned was that the clinic needed a dental X-ray system. “We are very limited on what we can do now,” Nina remembered someone saying.

Following the tour, Nina told clinic personnel that they would return. A year later they were back. This time they couldn’t bring the whole family, meaning their daughters Mandy and Lauren, and their husbands. “Our children could not join us as they all were having babies,” right then.

“We brought our staff instead,” Nina said about their return trip last May. “We also brought a new X-ray system to donate to the clinic.”

With the new system in place, Nina said they were able to treat 25 to 50 patients per day during their visit. “We did not turn anyone away,” she said. And the patients they saw were in need of a lot of dental care. Beetle nuts are a favorite of the islanders to chew and they cause a lot of tooth damage, including staining.

The Harrises and their staff stayed and ate right at the mission, Nina said about their arrangements. “The mission has housing for about 55 to 60 people at a time,” she said.

They paid a small fee to stay there and that paid the employees at the mission.

A small cafeteria provided the meals for the Harrises.

The Mission at Natuvu Creek is found on the eastern coast of Fiji’s second largest island called Vanua  Levu.

According to its web site, the Mission at Natuvu Creek’s goal is to serve rural people of Fiji. They are provided with medical and dental care, education programs, job training and counseling, “in an environment of healthful living and personal growth.”

“Our vision is to be a model community, which other communities within Fiji want to emulate.”

The Mission at Natuvu Creek is a non-denominational faith-based nonprofit organization.

The mission is situated on Buca Bay on the island. It encompasses 750 acres that includes an extinct volcano, rain and bamboo forests, and of course the invitation of the ocean waters.

Nina said the mission had kayaks and offered plenty of snorkel opportunities. The Harrises and their growing family are diving enthusiasts, which is what attracted them to the Fiji Islands in the first place.

Nina said that nearby is Rainbow Reef, a famous dive destination. Currently, there are six dive centers focusing on the reef and its huge variety of coral.

Rainbow Reef, hailed as one of the world’s best dive sites, is located between the islands of Vanua Levu and Taveuni.

Part of the attraction is the Great White Wall, “a sunken escarpment blanketed in luminescent white corals,” according to reviews in Time’s Global Adviser.

This wall is reached by what is called a tubular swim-through that includes flexible, treelike soft and hard coral. This is home to millions of some of the world’s most colorful fish varieties of anthias and pelagic fish. Manta rays, barracuda and harmless reef sharks also make this home.