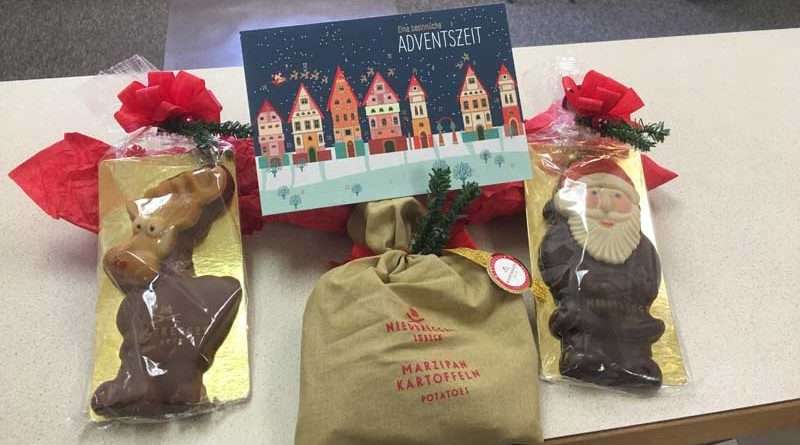 After a new friendship struck up by German visitors, the Ziehms, with Audrey Ellis of the Lost Sierra Chamber of Commerce and Tourist Center, Christmas parcels arrived by mail from Germany, with chocolates and marzipan galore. Photo submitted.
News
December 13, 2017December 6, 2017 Lauren Westmoreland, Staff Writer

Imagine traveling to a foreign country with a handbag full of the most important items one might possibly need, such as passports and cell phones, and then losing that bag at a public place.

The director of the Lost Sierra Chamber of Commerce and Tourist Center, Audrey Ellis, imagined it all too well in mid-October when just that scenario played out in front of her eyes.

“It was at the Lost Sierra Tourist Center,” Ellis recalled. “This lovely couple had stopped by on their travels from Lubeck, Germany and they wanted more information about Plumas County as they were passing through in their travels around California.”

After pleasant conversation, the couple left, with hands full of pamphlets and information, and it wasn’t until they had driven away that Ellis realized that the woman had left her bag near the racks outside.

“I just thought how I would feel if I left my handbag somewhere while traveling in a foreign country, after we realized that the passports and such were in there, and so a chamber member, Kim Fleeman, and I got to work searching for a way to find the couple,” Ellis said.

Thus ensued the hunt. Ellis and Fleeman worked together to attempt to reach the couple by phone through a number found in the bag, but to no avail — the cell phones didn’t have service in the United States.

Fleeman attempted to reach out to the couple through their cell service providers, while Ellis prepared to start calling all of the places of lodging in the area, with no idea if the couple were still even in the area.

“I was just really hoping that they hadn’t left for their next stop up the coast yet,” Ellis said. “I was also concerned at the potential for the couple to end up at the airport with no passports.”

Office hours drew to a close, and still the couple was nowhere to be found. So Ellis decided to painstakingly write a letter in German to post on the Tourist Center door, which stated that the bag was safe and provided a contact for Ellis in case they returned that evening.

“I let them know in the letter that I would come open the center to return the bag whenever they needed,” Ellis said, smiling. “I wanted to ensure that they would rest easy knowing the bag was in safe hands.”

Just as Ellis had finished typing up the letter and was preparing to post it on the door and lock up for the day, the couple pulled up and the woman darted out of the car, searching anxiously for her bag outside the center. “I thought she was going to fall down and cry,” Ellis said.

Ellis rushed to give the couple their bag and showed them the letter as well, with the husband reading it and exclaiming “Danke!” with big hugs for Ellis.

The couple introduced themselves as Jutta and Harald Ziehms, and after heartfelt thanks to Ellis, returned to their vehicle and drove away.

About a week later, Ellis spoke with Wendy of Sierra Sky Lodge, who had hosted the couple at the Lodge during their stay in Plumas County.

“Wendy told me how the couple enthused about how their stay had been amazing, and that they were so appreciative of all that we had done to attempt to find them here at the Chamber,” Ellis said.

“Then she told me that they had asked for the Chamber address. I expected a card, perhaps, but around Nov. 7, we received a large parcel filled with German marzipan chocolates, potato marzipan balls, which are a specialty of the region of Germany they are from, as well as a beautiful Christmas advent calendar card and a handwritten letter in English, thanking us and inviting us to drop by any time we were in Germany in the future.”

Ellis sent off another letter in German, thanking the Ziehms profusely. “I am just so glad that they went away from Plumas County with a good feeling, a good experience of the people in Plumas County,” Ellis said warmly.

“They reported nothing but great memories of their time in Plumas County, emphasizing how warm and gracious they found their hosts to be during their stay, and how friendly everyone was,” concluded Ellis.