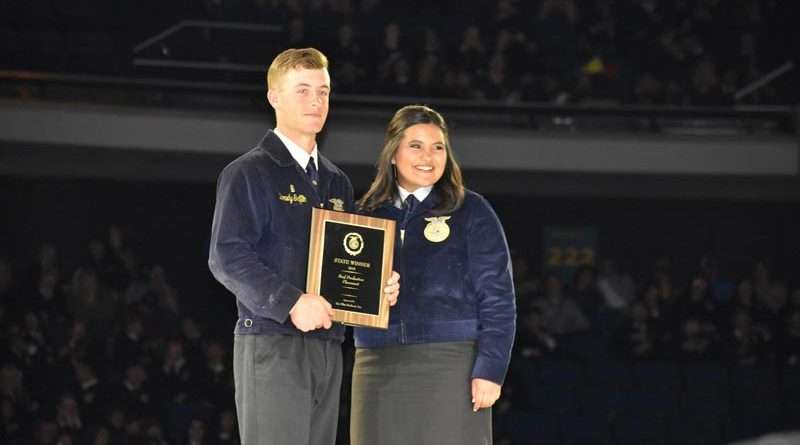 The National Convention is coming up and Loyalton FFA has three post-high school students that will be receiving their American degrees!

The American FFA Degree is awarded to members who have demonstrated the highest level of commitment to FFA and made significant accomplishments in their supervised agricultural experiences (SAEs).

On Nov. 2, Bowdy Griffin, Bryant Doyle and Bret Colberg will be joining Mrs. Griffin in Indianapolis, Indiana, to walk across the stage to get their final and highest degree in FFA.

In order for a student to receive this award they must have:

– Received the State FFA Degree, have been an active member for the past three years (36 months) and have a record of satisfactory participation in the activities on the chapter and state level.

–Graduated from high school at least 12 months prior to the national convention at which the degree is to be granted.

– In operation and maintained records to substantiate an outstanding supervised agricultural experience program, through which the member has exhibited comprehensive planning and managerial and financial expertise.

Hours used for the purpose of producing earnings reported as productively invested income shall not be duplicated as hours of credit to meet the minimum requirements for the degree.

– A record of outstanding leadership abilities and community involvement and have achieved a high school scholastic record of “C” or better as certified by the principal or superintendent.

Selection for the award requires a rigorous approval process. Applicants must submit an application with signatures of the chapter president, chapter advisor, superintendent or principal, and state advisor or state executive secretary, certifying accuracy of all statements in the application and that the applicant conducted him/herself in a manner to be a credit to the organization, chapter and community.

Bret Colberg earned his degree with multiple SAEs: his Entrepreneurships were Market Lambs and Poultry Production, and his placements were in food production as a Butcher Assistant for two different butchers and as a ranch hand. He is a senior at the University of Nevada, Reno, majoring in Chemical Engineering with an emphasis in Biomedical Engineering. Bret graduated from Loyalton High School in 2016.

Bryant Doyle earned his American degree with multiple SAEs: his placements are Landscape Management, Greenhouse Production, and Soil Science Technician. Poultry production was his Entrepreneurship. He graduated from Loyalton in 2016 and is attending Cal Poly, majoring in Agricultural and Environmental Sciences (concentration in Fruit and Crop Sciences) with a Minor in Bioresource and Agricultural Engineering.

Bowdy Griffin earned his degree with multiple SAEs: He was the winner of the CA State Beef Placement Proficiency. His placements were working for Griffin Livestock and York Cattle and Performance Quarter Horses. His Entrepreneurships included Breeding Beef, Market Beef, and Timber Fuels. Bowdy is playing baseball for Feather River College and working on his Agricultural Business Management Degree. He graduated from Loyalton High School in 2018.

Brock Griffin, Loyalton’s current Chapter President and Superior Region Vice-President, will also be traveling to Indiana as a National voting delegate for the state of California. He was placed on the committee for membership experience, where the members from all 50 states will discuss FFA dress code, mental disabilities, ethnicities and religions. They will compile their findings and present it to the other voting delegates, and at the convention for all FFA members to hear.