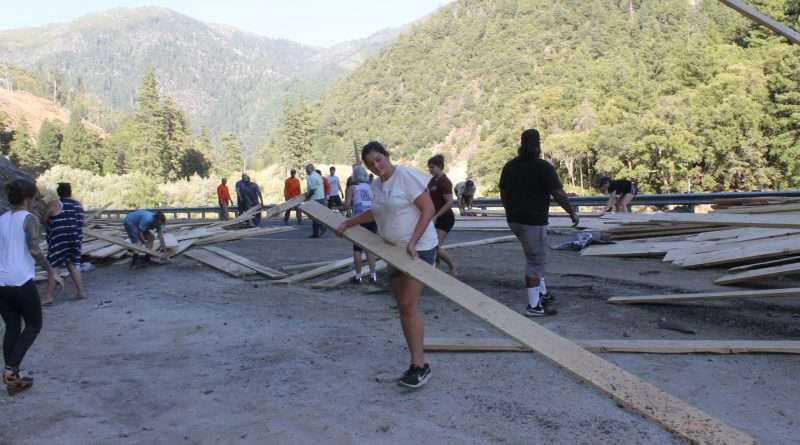 When a loaded lumber truck from Quincy’s Sierra Pacific Industries didn’t make a curve on Highway 70 in the Feather River Canyon Thursday, Aug. 13, travelers on both sides of the accident jumped into action. With the driver assisting volunteers, approximately a dozen men and women got busy and moved the lumber to the side of the highway. This allowed drivers then to go around the truck. The CHP and Quincy Fire Rescue and an ambulance form Plumas District Hospital arrived a little later. Photo by Victoria Metcalf
News
August 14, 2020August 16, 2020 Editor

An overturned lumber truck closed Highway 70 west of Chambers Creek in the Feather River Canyon about 5 p.m. on Aug. 13.

According to a report released this morning by the California Highway Patrol, Jesus Acero, 27, of Bakersfield was driving a 2009 Peterbilt pulling a flatbed trailer loaded with lumber westbound on Highway 70. While negotiating a left hand curve in the roadway, he allowed the right side tires of the trailer to drive onto the north shoulder. He made an unsafe turn to the left in an attempt to regain control of the loaded trailer, but the turn caused the Peterbilt to overturn onto its left side on the roadway. All of the loaded lumber on the trailer scattered across the roadway. The Peterbilt tractor and trailer came to rest in both lanes of Highway 70 and partially on the north shoulder. Multiple gallons of diesel spilled onto the north shoulder creating a hazardous material incident. Acero was wearing a seatbelt and not injured in the collision.

Quincy resident Victoria Metcalf was in one of the first cars to be stopped by the accident scene. She said other motorists quickly began removing lumber from the roadway and shoveling dirt on the diesel.