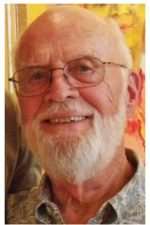 Marvin Edward Schmidt, 88, of Quincy, California, passed away on February 23, 2021 in the Eastern Plumas Health Care’s campus in Portola.

He graduated from Bellarmine College Preparatory High School in San Jose and then earned an undergraduate degree in Commercial Art at San Jose State University. While at San Jose state he was the editor of the humor magazine, president of his fraternity and a member of the Blue Key National Honor Fraternity. After graduating Marvin and Norberta began their teaching careers in Colusa and Los Altos, California. During that time he and Norberta started their family and Marvin continued his education, earning a Masters of Art at San Jose State University.

In  1968, Marvin and Norberta took their family on a camping trip to Plumas Eureka State Park and fell in love with Plumas County. In 1969,  Marvin was hired as one of the first of seven faculty members at Feather River College. During his years in Quincy he was  involved in the arts community. In addition to teaching at Feather River College he was a Fullbright exchange teacher in England, and later taught art in Kuwait, Saudi Arabia and South Korea.

There will be a service on Saturday, February 27 with immediate family due to Covid-19. The family hopes to have a celebration of life when COVID restrictions are lifted.

In lieu of flowers, donations can be made to Plumas Arts or the Feather River Land Trust.