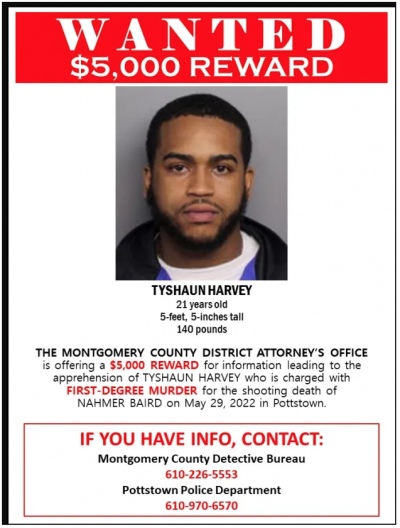 A Pottstown, Pennsylvania murder suspect was arrested Tuesday in Susanville.

According to a statement from the Susanville Police Department, the US Marshals Fugitive Task Force asked for assistance in the possible arrest of an individual wanted for murder in Montgomery County Pennsylvania.

About 4 p.m. Tuesday, Aug. 9, agents set up near the Super 8 Motel contacted the SPD. While conducting surveillance, the suspect, Tyshaun Harvey, 21, was observed walking into the Walgreens Parking lot from the Super 8 Motel. Agents converged on Harvey and he was taken into custody without incident. SPD officers assisted agents by contacting Harvey’s acquaintances in the motel and seized a firearm located inside the room.

According to the SPD statement, investigators believe Harvey had been in the Susanville area for the past week staying with an unidentified female who has been working locally as a contracted nurse. Authorities from Montgomery County Pennsylvania said police responded to a reported shooting that took place about 8:08 p.m. May 29 in Pottstown, Pennsylvania.

Investigators learned a Chrysler 300, owned and driven by Harvey, was following a vehicle through the streets of Pottstown for 40 minutes before an exchange of gunfire began between the two cars resulting in a death.

Harvey was taken to the Lassen County Jail where he was booked on his warrant and to begin extradition proceedings back to Pennsylvania.