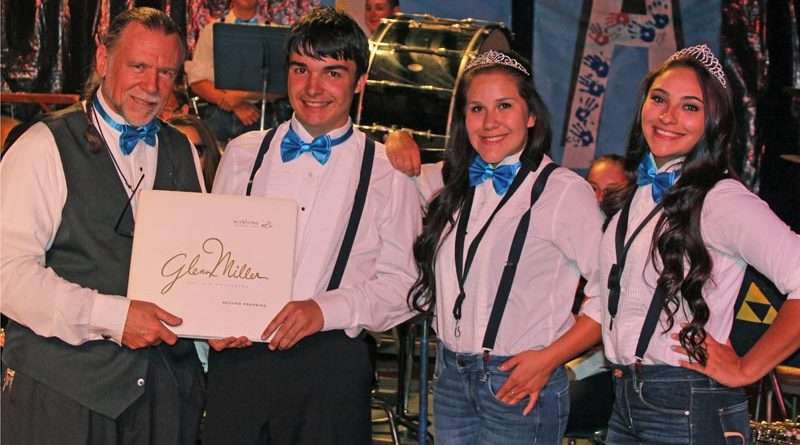 Tomorrow night marks the end of an era. Jim Norman, beloved music teacher and band director of Greenville High School will be conducting his last Pops Concert before retiring. The long and winding road, as befits a music teacher.

Jim Norman has taught at Greenville High School since 1976, the fall after his graduation from California State University Hayward where he majored in percussion performance and music education.

He’s taught every aspect of K-12 musical education including all kinds of bands and choirs. He’s also taught math, business and finance, art, and physical education.

During the school year, he’s arranged and led students to performances in winter concerts, pop concerts, and Plumas Jazz Night.

Upon hearing of his retirement several former students expressed both admiration and wonder at the man who influenced them the most during their time at Greenville High School.

“I remember the music theory lessons I received in the Parish Hall after mass. I called him when I started playing with new musicians and bands. He gave me advice when I went back to school to become a music teacher,” Leal continued.

There are many that feel that way. GHS alumni Jerome Little went on to have a career as a luthier — music being a constant in his life as well.

“He has had a huge impact on a lot of people that is now felt way beyond Plumas County. He taught me to play (the drums). What a gift! Music in general has enriched my life immeasurably and some of that started by being in his band,” said Jimmy Leal. He adds that he hopes they can find time to play music together now that he’s retired.

“Jim loves kids. He puts in many extra hours making sure that each student is getting what he/she needs.” After the Plumas Jazz Night in Quincy, Cockerill said she felt the power of both the band and the choir. “Wow” was all she could say, she said.

“You can see Jim’s eyes light up when he is preparing for a performance. He wants them to love music,” Cockerill said.

Students have made difficult decisions regarding which school to attend based on his classes.

During the school year he takes time away from his own weekends to shepherd students to band opportunities with coordination with fellow retired music teacher Marsha Roby.

During the last PUSD board meeting held in Greenville, students, their families and community members spoke to the assembled board members and the room on the impact Norman has had on their lives and the Indian Valley community as a whole.

Two of his current students want to become band teachers because of him.

If it sounds as if it’s all giving and no receiving, that’s not the case at all. He acknowledges how much teaching Indian Valley’s students over the years has given him.

Norman remembers many high notes in his music teaching career — including “Superior scores at music festivals, conducting honor bands and many memorable and emotional moments at Pop Concerts.” A responsive teacher, he recognizes those intangible and perfect teaching experiences. “The most treasured are those random magical moments in the classroom which may be over in an instant, but last forever,” said Norman.

“Music teaches and reinforces many skills including discipline, perseverance, listening and compassion. Some students continue to play after graduating, and some have gone on to pursue careers in music education, but all students take those values with them as well as many memorable experiences as a result of being in band and/or choir,” added Norman.

You can see the unity of the experience he describes at any concert where he’s gotten strong performances out of his students — regardless of how new they are to their instruments. and the quiet respect they demonstrate in his presence.

Norman looks forward to spending more time at home with his wife Gina, doing various projects he’s meant to get around to, perhaps riding his bicycle, fly fishing and camping at Mt. Lassen National Volcanic Park.

His students and former students will no doubt coax him out of retirement a bit, too — it won’t be too hard.

He also writes arrangements and original compositions, which have often been performed by various groups in Plumas County and Reno with the Pops Orchestra. In retirement, he hopes to continue down this path with an emphasis on music accessible to small rural bands.

4 thoughts on “Music teacher to retire after 42 years”