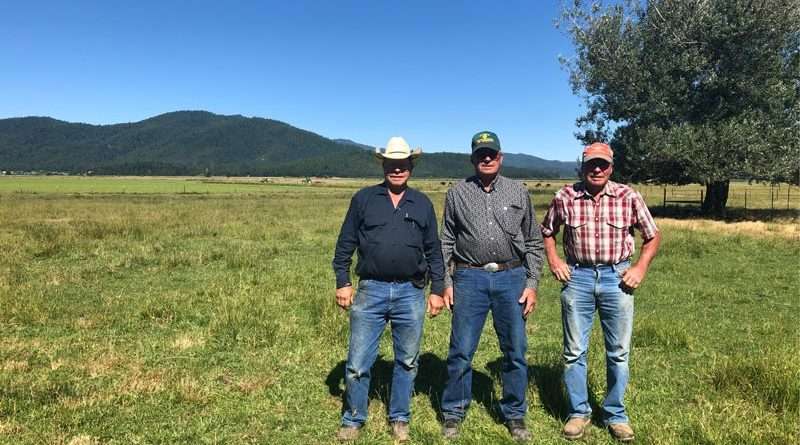 When it came time to select the grand marshal for the annual Taylorsville parade, organizers opted for three instead of just one — Charlie, Gary and Pete Neer.

The Neer brothers are following a family tradition of sorts. Their mother, Margaret, also served as the rodeo parade’s grand marshal.

Sixth-generation ranchers, the Neer brothers are known throughout Indian Valley for their barbecues and fish fries, but most importantly for their community involvement and their willingness to help their neighbors.

“As far as community members, these are the kind of folks who make our valley the special place that it is,” said Kevin Goss, a family friend and Plumas County supervisor. “They help out wherever they can and that is something that has carried on throughout the generations. They are pillars of the community.”

The sixth-generation family centers around the Neer Family Ranch, home to cattle grazing and horses. Gary’s sons, Ryan and Aaron, also work on the ranch.

Many generations will be participating in the rodeo. Not only will the Neer brothers lead the parade, but they will be accompanied by many of their grandchildren — some on horseback and others riding behind the stagecoach that will be transporting their grandfathers.

Daisy Neer, 13, who is Gary’s granddaughter, said she plans to ride her horse. “I’m so proud of my grandpa,” she said.

Her grandmother, Susan Neer, described the Neer boys as “typical” brothers. “They argue about things and then they get in and do it all together,” she said. “It takes all of them to run things.”

Susan added that they were honored to be selected as this year’s parade grand marshals because “this valley is very important to all of them.”

Mary Lynn Neer, Charlie’s wife, has been officially part of the family for 47 years, but she has known them her entire life.

“Charlie’s mom was the best cook in the valley and she was known for her big noon meals,” Mary Lynn said, and noted that often others would join the family to enjoy one of Margaret’s large roasts and heaping bowls of potatoes as they came out of the oven.

The family would host lamb barbecues and 100 people would come, she recalled, as well as their popular fish fries.

While there was always time for a little socializing, the Neer brothers worked long hours. “Charlie’s dad and the three boys were partners and they would be up before daylight,” she said.

They bring that same work ethic to the local organizations that they support such as the Indian Valley Riding and Roping Club and the junior rodeo.

“They are a big help to our club,” said its president, Misty Banchio. Her father will be providing the mules to pull the stagecoach that the brothers will be riding in on the Fourth of July.

The Taylorsville Fourth of July Parade gets underway at 10 a.m. It will be followed by a horseshoe tournament at 11 a.m. and the Silver Buckle Rodeo at noon.