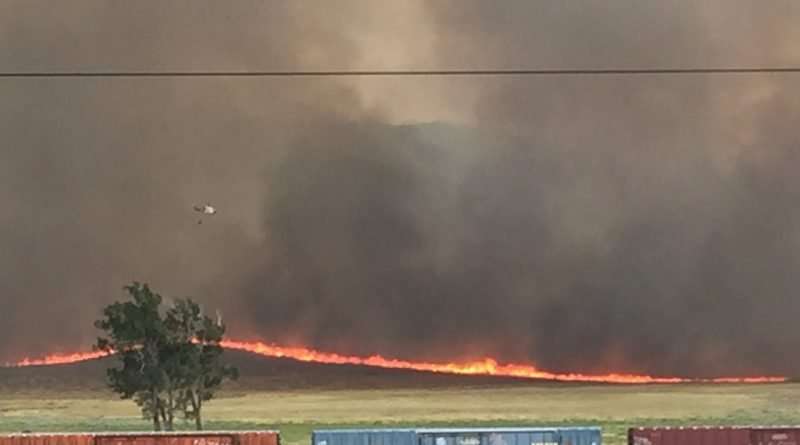 This photo of the fire near Chilcoot was taken from Highway 70. Helicopters and ground crews are responding. Photo by Ron Jacobson
News
August 6, 2017August 10, 2017 Editor

7:40 p.m: The Forest is reporting that the Mahogany Fire, north of Lake Davis is contained. A new fire (Dixie) is reported north of Dixie Valley and east of 4 corners. T25N, R14E, :30pm -Sec26. Staffing is enroute.

7 p.m. The Forest Service is reporting three fire starts above Paxton in the Feather River Canyon. One is about 10 feet by 20 feet and the other two are about one-quarter acre each. Low rate of speed and no wind on them. Air attack is above and air tanker is en route.

There is also a single tree fire reported in the Moonlight Fire footprint. Forest Service is responding.

Plumas National Forest is responding to 2 new fires slightly southwest of Taylor Rock, roughly 4 air miles north of Massack Rest area (T25N, R10E, Sec 35 & T24N,R10E, Sec 2). Helicopters and engines are working the fires and report the fires are not spreading and will be taken care of quickly.

Another small fire was reported slightly earlier at Mahogany Ridge, north of Lake Davis at T25N,R13E,S28. Firefighters have responded.

A fourth fire near Chilcoot (T22N, R16E, Sec1) is a Tahoe NF fire and they are responding.