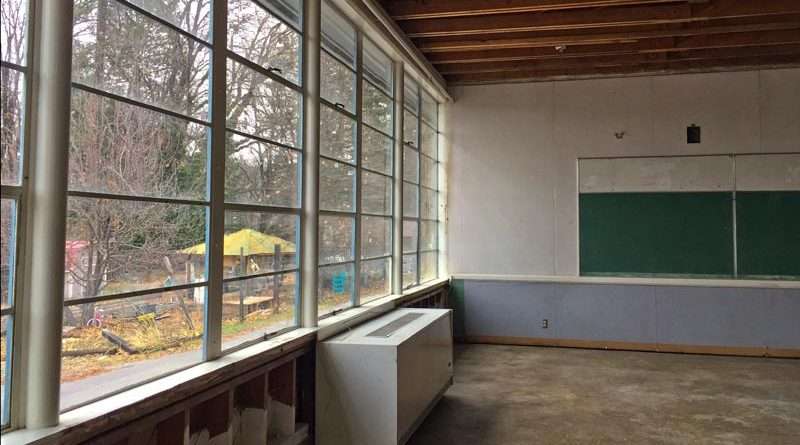 PUSD school board members and administrators toured QES during construction in December to select options for window configurations and digital-learning improvements. They approved replacements for the large windows in all classes and added high-tech “teaching walls.” Photos by Roni Java

Choosing a pleasing, functional arrangement of windows, shelves and classroom space is not nearly as easy as one would think. There’s a lot to consider.

So a few of the Plumas Unified School District’s Governing Board of Trustees walked around Quincy Elementary School’s Alder Street site in December just to be sure.

To preserve the amount of natural light filtering into each class, they voted 3-0 to install replacements for the large banks of eight-window panels in all nine QES classrooms and add new high-tech “teaching walls” for a cost of $675,000. Cabinets and storage options will be addressed later.

The vote was made on foot as School Board President Leslie Edlund and Trustees Dave Keller and Dwight Pierson met with QES Principal Lara Hollister, PUSD Superintendent Terry Oestreich and some members of the administrative team to tour the campus and consider renovation options for the classrooms.

The conversation was necessitated when the district’s original plans to keep the existing class cabinets and storage had to be abandoned due to unanticipated and combined mold, lead and asbestos abatement needs.

Four options were up for discussion, ranging in cost from $325,000 to $675,000 to modernize the classrooms with new windows, cabinetry, electrical work and technology.

Timing of the decision was an important issue in order for the school district to meet requirements of the Department of the State Architect and also later apply for the highest level of hardship funding toward the cost of these Phase One renovations.

So the trustees asked a lot of questions and received input about what would most help and support the teachers, students and school site.

At this point in the process of allocating Measure B bond monies to make critical facility safety repairs and improvements at PUSD school sites throughout the county, the trustees and district staff have become virtual experts at making lemonade out of the occasional bushel of lemons they encounter.

Unable to carry out planned 2018-19 school-year renovations with full classrooms in progress on site, the district relocated students, teachers and staff across town to Pioneer School in August. So far, so good.

As approximately $8 million worth of repairs and updating ($2 million of which include soft costs such as architect fees, permits and other expenses that are subject to change) began at the beloved campus that is filled with decades of memories, PUSD found the location was also filled with some unwelcome remnants from the past, such as asbestos in flooring materials and lead and mold in other locations.

You guessed it, renovating an old school is a lot like working on an old house — tear out a wall here or pull back some flooring there and you’re bound to discover a few surprises, things that might not have been in your budget but now you must address them.

The asbestos abatement for the cafeteria alone added about $150,000 to the project cost, outside the original $8 million budget.

“These things can come up quickly,” Superintendent Oestreich advised the board members. “The additional abatement (to the administration area, hallways and cafeteria where mold and asbestos were discovered) has delayed us a full month. When we opened up the classrooms, these (similar issues) came up and it’s the same experience we’ve had with all of our remodels.”

The school district has, to its credit, been deftly dealing with some “surprises” in the QES project, just as they have done with other work at district school facilities, like the Greenville Junior-Senior High School gym.

As change orders have arisen to expand the scope of the QES repairs and modernization, the trustees have looked carefully at opportunities to get the most bang for the buck with the community’s bond monies and economized where it made sense in dollars, time, materials or all three.

“We have also had some very generous assistance from our contractors, A-Plus in the case of QES, who have donated work to us as these unanticipated changes have come up,” she said.

Ray Bakker, PUSD Maintenance and Operations Supervisor, led the QES tour for the board members and echoed Cavin’s remarks when he mentioned that a significant portion of the demolition work on the old flooring, which contained asbestos, was done at no charge by the contractor as a contribution to the school renovation project.

School district staff members also continue to diligently seek and plan for applications for “hardship” funding reimbursements from the state.

There are many requirements to meet and accommodate when applying for state funding that, if approved, will reimburse PUSD only a percentage of actual costs for its countywide school site projects — the majority of which have involved critical safety work such as electrical repairs, roofing, plumbing and more.

At QES, flooring, cabinetry and other elements have presented exactly these kinds of problems to be solved, needing to be torn out, safely abated and replaced with new materials.

The banks of QES classroom windows have been impacted by the renovation work and the trustees have an abiding commitment to making sure each classroom provides an outstanding learning environment for students. So they decided a physical tour was just the thing to aid their decisions.

“I look at projects like this like a classic car that’s burning oil,” Trustee Pierson said with a little levity. “You address that and then you find you need new rings. Then other parts need attention. In the end, you still have an ’88 Oldsmobile, but it’s better to take care of this now than have it pop up two years from now.”

When the work is completed and students, teachers and families come back to school at the QES Alder Street site next fall, they will be excited to see more than just a safe new roof, fresh paint and new carpet and floor tiles.

QES classrooms will provide 21st century learning environments, a bright daylight environment, energy-efficient windows and coverings, plenty of storage space (sure to be a hit with teachers) and technological teaching resources such as large TV screens where digital presentations will help prepare students for tomorrow’s workplaces and post-secondary education.

It’s a brave new world in education and Plumas Unified is bringing welcome improvements to the community’s schools, one site at a time.