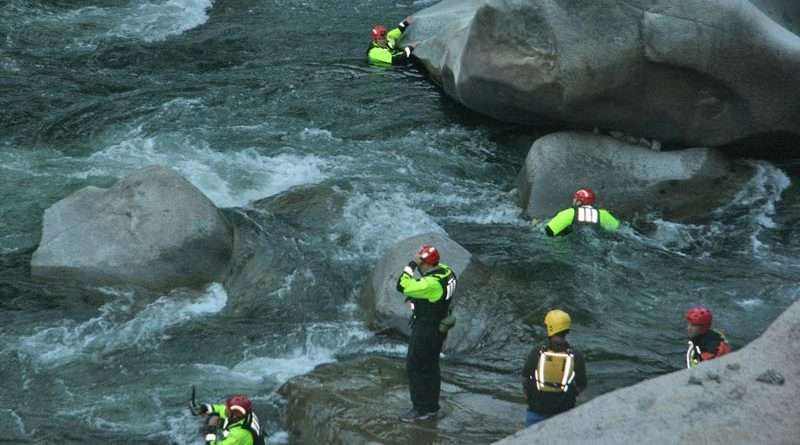 For the second time in as many weeks rescue crews from Plumas and Butte counties recovered the body of a drowning victim on the North Fork Feather River. The body of a Palo Alto woman was recovered when she slipped into Rock Creek from a trail July 17. Then a 9-year-old Chico boy’s body was recovered when he went swimming, became caught in a swift current and then lodged against rocks. Photo by Will Farris
News
July 31, 2019July 30, 2019 Victoria Metcalf, Assistant Editor

The North Fork of the Feather River claimed the life of a second victim this month.

A week ago, Heather Noone, 48, of Palo Alto, fell into Rock Creek on July 17 while hiking along the river’s edge. A team recovered her body with Swift Water Rescue in the Rock Creek area.

Three people, including the child, went swimming in an area just below the Tobin Bridge on July 24.

The current was running fairly fast and two of the swimmers made it to shore, but the younger boy didn’t make it out. This was around 6 p.m., according to information from the Plumas County Sheriff’s Office.

“When we arrived with our rescue squad, search and rescue was already on scene,” Correira said. “A plan was made to get most of the first responders that were not crucial to the actual search to spread out down stream.”

Those rescuers used what Correira called throw bags to help in rescue efforts downstream. “A helicopter was used briefly in the search as well,” he said.

The victim was quickly located so the helicopter and downstream rescue efforts were canceled. “A raft was used to get closer to the victim,” Correira explained.

As a precaution, the raft was tethered on both ends and then pulled into a crease in the rocks where the victim was located. “Butte County Swift Water Rescue team were the ones in the water for the recovery,” Correira said.

“Our team rapelled down with the stokes basket to retrieve the victim along with search and rescue,” Correira said.

The boy was pronounced dead at the scene.

Due to the victim’s age, his identity will not be released. The swimmers were from Chico.

Following three drowning deaths of swimmers within about a two-week period in the same Tobin Bridge area a number of years ago, PG&E posted warnings along the shoulder and turnout areas along Highway 70, recalled Plumas County Sheriff Greg Hagwood.

The problem is some people ignore the warnings and give in to the spell of dramatic pools and invitingly cool waters flowing amongst boulders and rocks on that stretch of the river.

But the boulders and rocks naturally create sieves, underwater tunnels and places where swimmers can easily become trapped. The nearby waterfall that flows into the North Fork at the bridge creates a quick current.

Experienced kayakers who enjoy the Class III, IV and V-rated water experiences warn others about the hazards of swimming in the area. “The consequences are real,” said one serious kayaker on the internet about the Tobin water area. “Swimming would be a nightmare.”

“In my mind a swim would be horrible here,” said another water enthusiast about the section near the Tobin Bridge.

When PG&E announces increased water flows on the North Fork, that area becomes more precarious with much higher flows.

Just this last weekend, July 27 and 28, whitewater recreation releases were announced by PG&E.

While the area is appropriate for skilled paddlers for Class III, IV and V, it is not good for tubing and especially for swimming, said PG&E spokesperson Paul Moreno.

When an emergency call goes out, first responders from Plumas and Butte counties are quickly on the road.

But even with lights and sirens going it takes responders time to reach many locations within the Feather River Canyon.