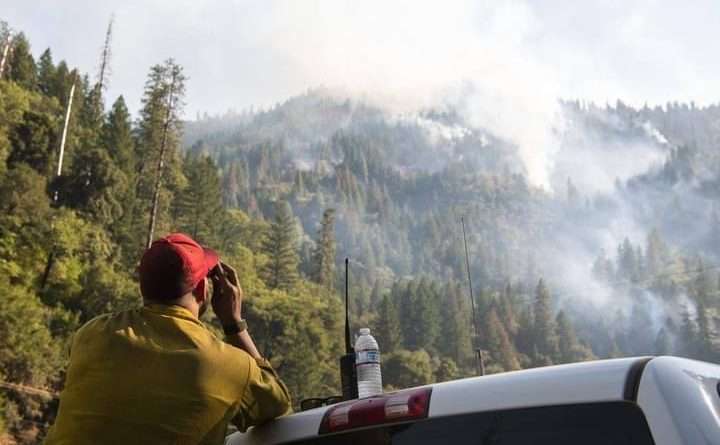 Keeping an eye on the North Complex Fire as it burns in the Feather River Canyon. Photo courtesy of the US Forest Service
News
October 10, 2020October 11, 2020 Editor

Just one week shy of the two-month onset of the North Complex Fire on Aug. 17, major progress is reported. Tonight will be the last shift for night crews as firefighters focus on fire suppression during the day.

Minimal fire activity is reported with green islands of vegetation burning within the interior. Crews will continue with mop up and back haul of hose lays. But firefighters must use extra caution today as the cold front passing through will bring scattered showers and winds gusting up to 30 mph, creating hazards as snags and tree branches may fall.

Yesterday, the Plumas County Sheriff ‘s Office lifted all mandatory and advisory orders that were in place.  Residents may return home, however they are reminded that fire personnel are still working in the area. They are asked to drive carefully and watch for fire equipment.

Forest closures remain in effect and hazardous conditions still exist. The public is asked to stay out of forest closure areas, as interference with fire suppression could delay firefighting efforts.  Law enforcement will be patrolling the area.

There will be one operational briefing video posted daily to the Plumas National Forest Facebook Page. Team Planning meetings (daily at 7 p.m.) and Cooperator Meetings (Mon-Wed-Fri at 10 a.m.) will be available to watch via Zoom (https://usfs.zoomgov.com/j/1602646317).

The North Complex Fire is now 318,930 acres and 91 percent contained, the fourth consecutive day that it has notched up 1 percent.