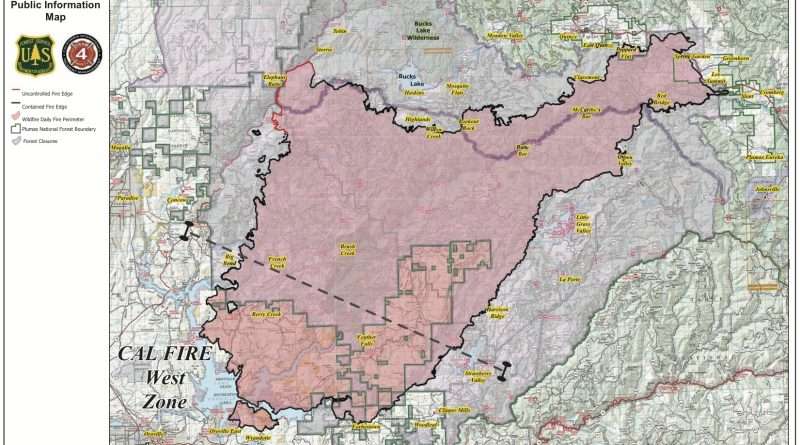 The North Complex Fire is just two days shy of its two-month anniversary. It broke out Aug. 17 as the Claremont and Bear fires (the result of lightning strikes), only to later merge and grow into the 318,930 acre fire that it is now. The acreage has remain unchanged for the past few days, as has the containment at 94 percent.

Yesterday fire crews continued to patrol and mop up, attacking hot spots and smoke as they found it. The plan today will remain unchanged. Infrared imaging has consistently shown that hot spots are well within the containment area.

Suppression repair is still a major objective with two groups assigned to this task. Additional specialty equipment is on order and arriving today for suppression repair tasks such as chipping brush piles, removing dozer line berms, water bars and mitigation of other hazards.

The Red Flag warning remains in effect today through Friday morning. Wind yesterday was less than was expected allowing crews to make additional progress. Incident management is still holding resources that would normally be demobilized to strengthen the line along Highway 70 until the wind event passes.

Forest closures remain in effect and hazardous conditions still exist. The public is asked to stay out of forest closure areas, as interference with fire suppression could delay or impede firefighting efforts. Law enforcement will be patrolling the area.

Residents in the La Porte and Bucks Lake areas are asked to use caution as fire personnel are still working in the area. Drive carefully and watch for fire equipment.

Operational briefings will be posted to the Plumas National Forest Facebook Page every other day at www.facebook.com/USFSPlumas Team Planning meetings (daily at 6 p.m.) and will be available to watch via Zoom (https://usfs.zoomgov.com/j/1602646317).