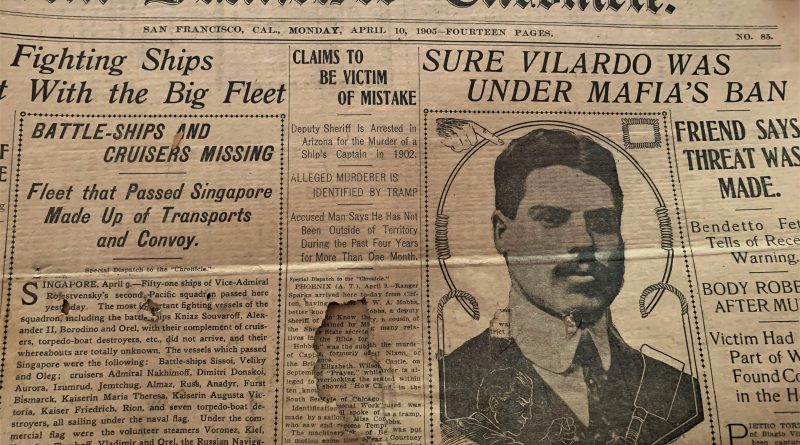 The past has come to life many times during the work associated with the restoration of this historic property, White Sulphur Springs Ranch — and it happened again on the 12th of April 2022.

New carpets had been ordered and John Barker, Robert Ware, Dennis Horton and Don Maddelena were painstakingly ripping out the old stuff.  Suddenly, under layers of the old worn and torn carpet in one of the upstairs bedrooms, some old newspapers appeared.  The date on the masthead of an old San Francisco Chronicle was April 10, 1905.   The front page had articles dealing with the participation of the Russian fleet in the Russo-Japanese war.  Another article on the front page described a hit by the Mafia on a local San Franciso man.  More than the front page was found but the interior pages were not explored for fear of them disintegrating into paper flakes.

Another publication found was titled “Butchers and Stockgrowers Journal.”  The date on the front page was June 11, 1904.  It announced itself as the “Official Organ of the Butchers’ Board of Trade.”   The quoted subscription price was “$2 per year….in advance.”  Most of the ads and articles had San Francisco locations.

Another old tabloid sized paper titled “Woman’s World” had a date of November 1904.  It was published in Chicago and cost 25 cents a year or 5 cents a copy.  It contained an ad for a “ball bearing sewing machine” the cost of which was $5.75.  Another one was for “Hayner Whiskey … 4 full quarts for $3.20, express paid.”

It begs the question;  how did these publications from faraway cities like San Francisco, and especially Chicago, find their way to rural Plumas County in the early 1900s?

The old newspapers were testament to the fact that the layers under the old carpets were laid down at least 117 years ago!  It was another historical highlight experienced in the long and fascinating process of restoring White Sulphur Springs Ranch.

After a couple of lean pandemic years the volunteers of the Mohawk Valley Stewardship Council (MVSC) are getting back into high gear.  Summerfest, the primary fundraiser, is coming back on June 26.  The old ranch house has a restored façade and vintage furnishings and will be available for tours during Summerfest.

New MVSC members are always welcomed.  If you would like to be a part of the restoration of this historic property or just make a tax deductible contribution, go to the website at www.whitesulphurspringsranch.com