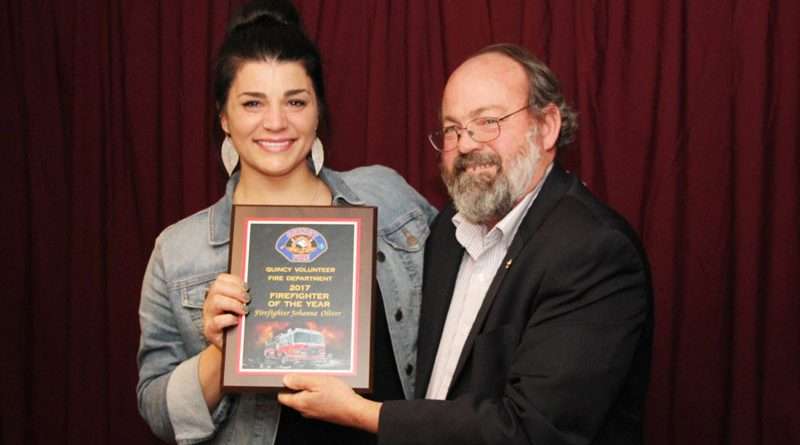 The list of accomplishments that this individual has made in the relatively short period of time she’s been with the department is truly remarkable.

In presenting the coveted award, Fire Commissioner Chuck Leonhardt said Oliver was selected from an impressive list containing the names of seven volunteers nominated by their peers at the department that “best embody the mission and values of the department.”

In his presentation Leonhardt noted that since joining the department Oliver hit the ground running achieving her state certifications in EMT-B, low angle rope rescue operations, fire apparatus driver operator and pump operations in addition to numerous other training activities.

Along with her many outstanding achievements, he noted that Oliver was also recently honored by the Board of Supervisors for saving a life using techniques she learned as an emergency responder.

“Her perseverance and passion for learning is nothing short of inspiring. One of the most important qualities of leadership is motivating the people around you. This firefighter continues to demonstrate an outstanding work ethic and unwavering positive attitude toward both fellow firefighters and citizens in the community,” Leonhardt said as he introduced her to the audience.

This dinner also marked the 50th anniversary of the special relationship shared by the Quincy and Dixon fire departments, considered by many volunteer firefighters throughout the state as a “uniquely healthy and envious family relationship” where these two departments travel a great distance to prepare and serve the dinner at each other’s annual installation banquets.

On behalf of her late husband and Quincy’s longtime fire chief Andy Anderson, Gayle Anderson took the crowd for a 50-year trip down memory lane that culminated with her presenting a commemorative plaque to Dixon’s department accepted by Dave Horigan.

Members of the volunteer department who have improved their run attendance by making 50 or more calls this year from the previous year were also honored at the banquet.

Captain Dony Sawchuk presented awards to the 2017 top three non-rank responders for 2017. They were Burgueño, Weinberg and Charlie Read, who took the gold medal responding to 134 calls.

Cassou went on to introduce the auxiliary team members who are working their way through the ranks to become certified firefighters. They include Parker Carey, Kyleigh Green, Jeremy Hammond, Jacob Hutson, Deirdre McCarthy, Barbara Schott, Stowe and Eric Vinyard.

Currently, the department has 28 volunteer firefighters and auxiliary members, 14 volunteer support members and a paid staff of three: the chief, an administrative secretary and a mechanic/facilities manager.  The department is always looking for volunteers to become firefighters or a member of the support team. Chief Cassou encourages anyone interested in learning how to become a part of this family to talk to him or with one of the department’s other volunteers or staff.

Other volunteer hours for outreach programs: 2,192