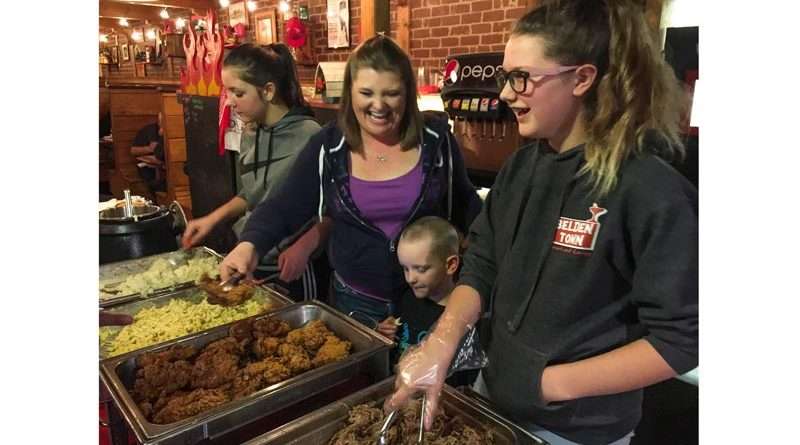 Neighbors Bar-B-Que Restaurant in Cromberg hosted the outreach dinner to acquaint Plumas vets and their friends and families with local services and the power of suicide prevention awareness. Serving up the delicious menu for 80 attendees are, from left, Zoe Wade, restaurant manager and co-owner; Allison Miller with her son Dylan, age 7; and Baylee Glover. Photo by Roni Java
News
March 9, 2018March 8, 2018 Roni Java, Staff Writer

Every single day, the U.S. loses an estimated 27 veterans to suicide and the Plumas County Veteran Services’ team is working hard to increase awareness and prevention here.

“The main thing is, have your eyes and ears open,” speaker David Schaffer told a packed house of veterans, friends and family members who attended a Feb. 20 outreach event sponsored by the PCVS office with several partner organizations.

“As of the late 1980s, 150,000 Vietnam veterans had committed suicide and it’s only grown since then,” noted Schaffer, a local Vietnam vet, therapist and licensed clinical social worker with many years of experience working with veterans. “If you see anyone feeling lost or alone, be aware. The biggest factor in reducing the suicides of veterans — or anyone — is prevention.”

How you can help

Schaffer outlined a simple method for increasing awareness when a veteran, or other person, might be in serious need. “If you think someone is considering ending their life, it’s very important to ask them directly, ‘Are you thinking of suicide?’ and then try to assess the risk level,” Schaffer said. He asked everyone to remember “CPR.”

C: Do they have a current plan? Ask them, find out what they think they would do and how they’d carry it out.

P: Have they had any prior attempts, thoughts or suicidal behavior? If so, the risk level goes up.

R: Do they know about or perceive that they have any resources available to them? “Remember, a person can be surrounded by family and friends and still feel alone and hopeless, so don’t take that for granted,” the therapist said. “In our society, we don’t talk about suicide. It’s our job to pay attention and prevent thoughts from becoming actions.”

“If we’re able to prevent one suicide, save one life, that’s a success,” said Rogers, who is a doctoral candidate. He serves as the site coordinator for Behavioral Health’s Portola location.

“Vets view things differently,” he added. “Their mindset is much different from that of a civilian. It can be hard to understand. They’ve come from an extremely structured environment and they go from that to transitioning out into zero structure. A lot of vets don’t handle that very well. It does something to you psychologically, too.”

Rogers said the number of suicides reported nationally in America in 2016 was a tragic 45,316. Of that number, more than 22 percent, or 9,982 victims across all age groups, were listed as veterans.

He emphasized the importance of connecting with veterans throughout Plumas County.

Coming home was not easy.

“When I got home, it was difficult,” said the veteran who is studying for a career helping other vets. “Just driving, under normal conditions, I was cutting people off and I was beyond aggressive. In Iraq, sometimes we had to drive tanks over cars. The first time in the car when my wife was riding with me, she freaked out. I was unconsciously reaching for my weapon like I did under combat conditions. I didn’t know I was doing it. She was beyond nervous, she was scared to death.”

Rogers said he also stayed clear of crowds of any kind, back at home, if possible.

“I avoided them like the plague,” he recalled. “I stayed on the outskirts because in Iraq, inside crowds, people died. I saw danger everywhere and I couldn’t turn it off. You’ll find that vets, even years later, will sit in a corner where they can see the room and the door, see everyone who comes in and out.”

“No matter what it is, no matter how alone you might feel, there’s a buddy or a vet out there who can help you out,” Short said. “You just need a familiar face and we’re here to let you know that there are a lot of services available for vets and their families. Just reach out.”

Vets received complimentary meals and co-owners Allison and Kyle Miller, who manage the popular eatery, prepared 80 dinners of fried chicken and pulled pork with their well-loved side dishes.

A fourth presentation is being developed for the end of March and will be held in either Portola or Quincy.

Getting connected is key

On hand to provide support for the event was Shane Starr, a member of the Plumas County Veterans Collaborative who works for Congressman Doug LaMalfa.

They spoke about the availability of training to use opioid antidote medication that is being successfully rolled out countywide by the Northern Sierra Opioid Safety Coalition. The antidote could prevent accidental overdoses in veteran populations and other persons.

Local Probation Officer Scott Quade also addressed the audience, saying, “If we had more services for outreach, how many people on my caseload could be helped? Please feel free to ask questions — I’ll give you resources.”

Before all the barbecue was gone and the crowd broke into small conversational groups, the value of meeting and connecting with other veterans was soundly endorsed by two more leaders.

Robert Turcotte, past commander for the Quincy Veterans of Foreign Wars Post 3825, thanked the attendees for their support. Commander Steve Ross with VFW Portola Post 3758 made a few remarks, too.

“Please come by the VFW and American Legion meetings,” Ross said. “Join us. All vets are welcome. Your involvement helps keep the posts going and we need young vets, too. You’ll have access to other service personnel and people to talk to. If you’ve served in Iraq, Iran, Afghanistan or elsewhere, you will find a lot of support.”

Rogers from Behavioral Health urged vets to get involved with the Plumas County Veterans Collaborative, as well.

“With 2,400 veterans out of the 18,237 residents living in this county, we have the highest per capita number vets of any county in California,” Rogers said, recommending local involvement as a great opportunity to provide input about important issues and services for fellow veterans.

The collaborative is an open forum promoting the exchange of information and resources for the care of military personnel, veterans and families. Interested service providers, veterans’ organizations and community programs that provide support for active-duty military, veterans, wounded warriors and military families are encouraged to attend and participate.