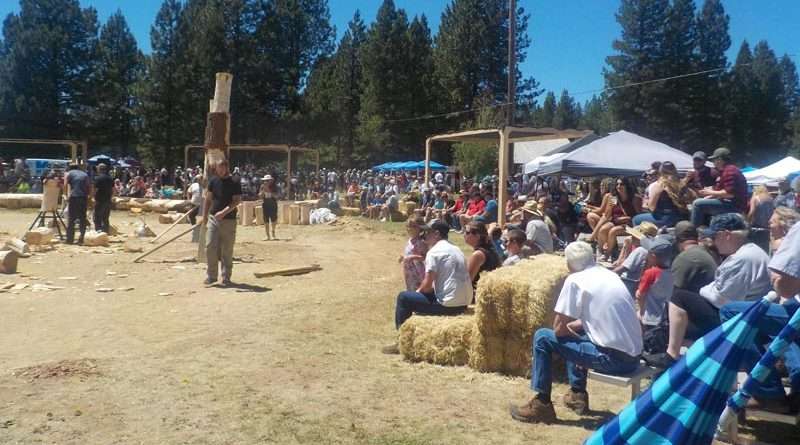 Stands fill fast when the logging show competitions begin at the Paul Bunyan Mountain and Blues Festival. This year the festival is Saturday, July 6, in Westwood Park, from 11 a.m. to 5 p.m. Photo by Susan Cort Johnson
News
July 3, 2019July 2, 2019 Staff

It is named after Paul Bunyan, a mighty lumberjack of American folklore, because of his connection to Westwood. The escapades of this character were used as an advertising strategy by the Red River Lumber Company, the mill Westwood was built around.

Sponsored by the Westwood Area Chamber of Commerce, the Paul Bunyan Mountain and Blues Festival has a wide array of activities included with the price of admission making it a good choice for families looking for entertainment the week encompassing the Fourth of July. The festival is located at Westwood Park at Second and Greenwood streets.

The most unusual aspect of the festival is the logging show in which contestants compete in lumberjack skills, such as the ax throw, standing block chop, choker race and singlebuck saw.

Some of the events feature old logging methods while others are techniques used by modern lumberjacks. For example, contestants are timed on how fast they can saw a log. Both handsaws and chainsaws are used in the competition.

The Jason King Band will perform at noon followed by the Kyle Rowland Blues Band at 2:30 p.m.

The Jason King Band is based in Reno and has performed all over Northern Nevada including the Big Easy Festival, the Nugget’s Best in the West Rib Cook-off and the El Dorado BBQ, Brews, and Blues Festival.

The Kyle Rowland Blues Band, from Sacramento, was formed in 2010 and has been playing around California at such places as the Monterey Blues Festival, Sacramento Music Festival and Redding Shasta Blues Festival.

Bring a lawn chair or sit on the grass to listen to the music.

Children have an opportunity to compete in Paul Bunyan activities designed for youth, such as nail driving and log rolling during the Junior Logging Show at 2 p.m. The winners of each event receive a medal.

Apple Pie Baking Contest Contestants bake two 9-inch pies, one for the judges and one to sell. The first place winner receives a five quart standup Kitchen Aid Mixer and the second place winner receives a $100 gift card to a kitchen utensil company. To enter, complete entry form and drop off at the Lassen County Visitor Center-Westwood Station on Friday, July 5, from 9 a.m. to 2 p.m. Pies must arrive at the festival by noon with judging at 12:30 p.m.

Bingo squares are sold and the winner picked when a steer relieves itself while grazing on a grassy area with numbered squares. The amount won depends on how many squares are sold.

Crafters will be selling their wares at booths and there will be vendors selling antique furniture, collectables and repurposed items. People can begin browsing and making selections at 11 a.m. when the booths open.

For an additional cost, children can cool off on an inflatable waterslide or slip and slide in the carnival area. In addition, they can play on other inflatable toys including a climbing wall. Fun carnival food is also sold at this venue such as cotton candy, kettle corn, Hawaiian ice and gourmet lemonade.

For more information on the Paul Bunyan Mountain and Blues Festival, contact the Westwood Chamber of Commerce at 256-2456 or visit the website at westwoodareachamber.net.