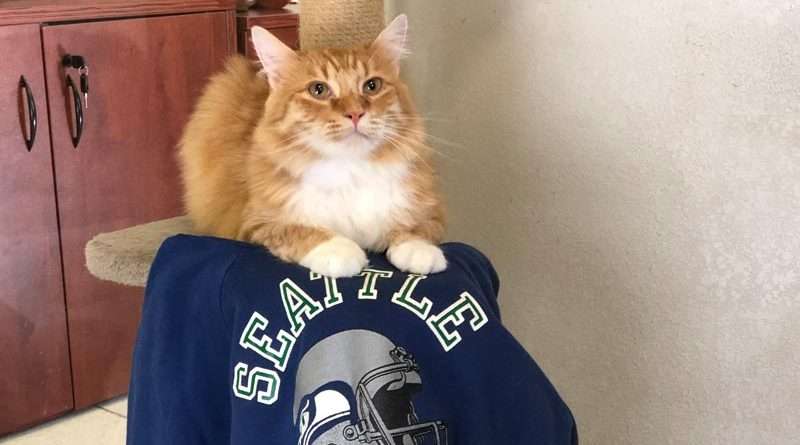 In honor of his new home, Bolero sits upon a Seattle Seahawks’ jersey. A Seattle man discovered Bolero online and flew to Reno to meet a PAWS volunteer and pick him up. Photo submitted
News
December 11, 2019December 10, 2019 Debra Moore, Managing Editor

PAWS volunteers have been finding new homes for cats for the past two decades — many right here in Plumas County, but others are states away.

Recently a Seattle man couldn’t resist a PAWS cat he saw online and flew to Reno to meet a PAWS volunteer and adopt his pet.

“Bolero” is now happy with his new owner in Washington, but his brother, “Tango,” is one of 30 cats still waiting for a home this holiday season.

You can meet Tango and the other available cats, as PAWS (Plumas Animal Welfare Society) celebrates its 20-year anniversary with an open house this Saturday, Dec. 14, from 2-6 p.m. The event includes a drawing for some great prizes.

Last week some PAWS volunteers took the time to reflect on the organization and their work with it.

Plumas County resident Stephanie Leaf founded PAWS in 1999, and since then the organization has rescued, provided medical care and found homes for more than 4,000 cats and kittens that faced neglect or abandonment.

In its early days, PAWS consisted of a few volunteers fostering cats in their spare bedrooms.

In 2001, PAWS opened “The Cathouse,” its rescue and adoption headquarters located in East Quincy.

Since opening the Cathouse, PAWS has rescued and adopted out an average of 200 cats annually.

‘This is an amazing record for a small private organization in a county the size of ours,” said Leaf, who still helps administer the group.

PAWS has also become an integral part of the community — conducting programs that further the cause of humane education, and providing spay/neuter assistance to Plumas County residents.

PAWS issued over $7,000 in reduced-cost spay and neuter vouchers in 2018. The kitten population exploded this year and PAWS is on track to match or exceed that amount in 2019. Private donations fund this program.

PAWS also contributed to Camp Fire rescue efforts with two board members, Barbara Montandon and Melissa Bishop, volunteering with the North Valley Animal Disaster Group. Twelve cats and a few dogs that had been released by their owners were brought to Plumas County for adoption. PAWS also donated food and litter to help those who needed it.

Although PAWS rescues primarily from the Plumas County Animal Shelter, the group receives no county funding nor from any other organized source. PAWS exists entirely because of donors.

PAWS prides itself on having all of its cats and kittens (that are old enough) spayed and neutered prior to adoption. Cats are also vaccinated for several feline ailments plus rabies.

The Cathouse is mostly cage free. Once a cat has its vaccinations and passes quarantine, it is allowed out to mingle with the other cats.

Check out the cats

You can visit PAWS in East Quincy or check out its cats that are available for adoption online at catspaws.petfinder.org.

A photo of each cat, its name and a brief description for viewing are available. That’s how the gentleman from Seattle — who wanted a particular breed of cat — found Bolero.

A lady from Kentucky is looking at another of the cats that PAWS is showcasing online.

But the bulk of the cats are adopted within the county and in Reno and Susanville.

Each of the cats is given a name and sometimes that can be challenging.

“I don’t know how many “Oreos,” we’ve gone through,” said Louise Delaney, co-director of PAWS.

PAWS adopts out a lot of kittens and slightly older cats, but sometimes the cats exceed 10 years, and they make a good match for an older owner.

The cats’ ages and personality traits are included in the brief biographies, which can help potential adopters know if it would be a good match. The volunteers can help as well.

PAWS is an all-volunteer organization. According to co-director Alice Parlier, no one at PAWS receives a salary, even those who put in many hours each week. This includes Parlier and co-director Louise Delaney.

Along with Delaney, Parlier and Leaf, PAWS is administered by a dedicated core of individuals, which includes board members Melissa Bishop, Barbara Montandon and Marilyn Irish.

Montandon represents the Chester/Lake Almanor area and holds adoption events there as well as two yard sales each year to help raise funds for PAWS. She also keeps spay-neuter vouchers on hand for area residents.

PAWS recently began taking cats to Pet Smart in Reno for adoption events and can use help in transporting the cats to Reno.

Parlier said that they particularly like this event, because Pet Smart provides everything needed — the cages, litter and food — as well as sends pet supplies back to PAWS.

Sometimes those supplies included items for dogs, which PAWS shares with High Sierra Animal Rescue. The two have a close working relationship in ensuring that the area’s cats and dogs find good homes.

More volunteers are always needed, not only to transport cats, but also to help out at PAWS. Anyone interested in working at the “Cathouse” is encouraged to call Parlier or Delaney at 283-5433.

PAWS cats can be viewed by going to petfinder.org and searching for PAWS in Quincy. You can also visit PAWS on Facebook at Plumas Animal Welfare Society (PAWS).

To adopt that special feline, visit the Cathouse at 2453 E. Main St. in East Quincy. It’s open from noon to 3 p.m. Wednesday through Friday, and Saturday from 10 a.m. to 2 p.m. and any time by appointment. Stop by to say hello and take home a furry friend.