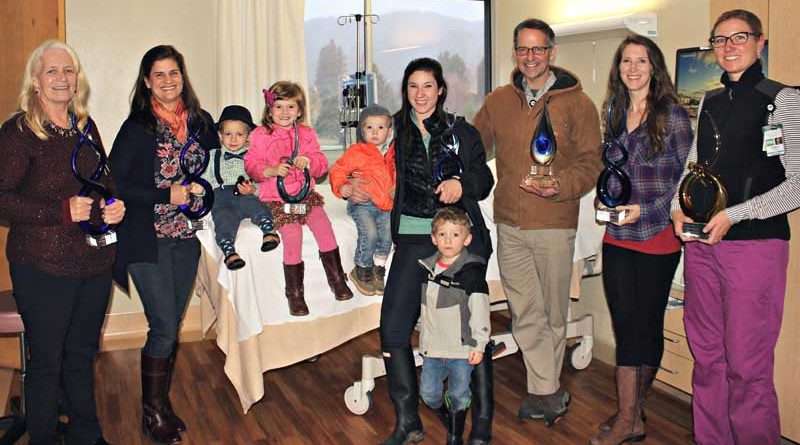 Plumas District Hospital was honored as one of the 111 California hospitals that met or surpassed a federal target aimed at reducing cesarean births — C-sections — for first-time mothers with low-risk pregnancies, according to the California Health and Human Services Agency.

The agency announced the achievement awards to hospitals on behalf of Smart Care California, a coalition of public and private health care purchasers that collectively purchase or manage care for more than 16 million people statewide — or 40 percent of all Californians.

Research finds that after two decades of annual increases, there has been progress in reducing the state’s low-risk, first birth C-section rate. The 111 hospitals that made the Smart Care C-section Honor Roll account for 45 percent of the 242 hospitals that offer maternity services in California.

“The decline in California’s rate for low-risk, first birth C-sections will lead to healthier babies and mothers,” said CHHS Secretary Diana Dooley, “Thanks to the hospitals and their staff for their hard work in achieving this measurable progress.”

To respond to a rapid rise in unnecessary C-sections across the United States, the U.S. Department of Health and Human Services adopted the Healthy People 2020 target of reducing nationwide C-section rates for low-risk, first-births to 23.9 percent. In October 2015, Smart Care California began its focus on this issue as well.

“It’s encouraging that so many hospitals are making great progress to reduce their unnecessary cesarean deliveries, especially well in advance of the Healthy People 2020 target,” said Julie Morath, President and CEO of the Hospital Quality Institute.

Evidence suggests that a woman’s chance of having a C-section largely depends on where she delivers and the practice pattern of her physician and clinical team. Even for low-risk, first-birth pregnancies, huge variation exists in hospital C-section rates. Rates in California hospitals range from less than 15 percent to more than 60 percent. Experts find that variation of this magnitude is a signal of a problem that needs to be addressed.

“The large list of Smart Care honorees show that hospitals can improve, and improve quickly,” said Lance Lang, M.D., chief medical officer for Covered California and a Co-Chair of Smart Care California. “Every type of hospital in every part of California can and should hit the 23.9 percent target.”

A look at the list of honorees finds that many hospitals are sustaining efforts to reduce the low-risk, first birth C-section rate, also known as Nulliparous, Term, Singleton, Vertex (NTSV). Nearly 80 percent of hospitals, or 86 out of the 111 honorees, achieved Smart Care Honor Roll status two years in a row, based on 2015 and 2016 hospital discharge data. The inaugural Smart Care California Hospital Honor Roll was announced in October 2016.

“We applaud the hospitals that have hit the 23.9 percent target two years in a row,” said Elliott Main, M.D., who leads the California Maternity Care Quality Collaborative, a multi-stakeholder organization committed to ending preventable morbidity, mortality and racial disparities in California maternity care. “Sustainability is hard, but these hospitals have shown it can be done. It involves a commitment from leadership and the engagement of the entire team of nurses and doctors,” said Main.

According to Main, steps hospitals can take to lower their low-risk, first birth C-section rate include participating in the CMQCC Vaginal Birth Collaborative and submitting data to the Maternal Data Center to get timely data for quality and performance improvement.

Collectively, Smart Care California participants purchase or manage care for more than 16 million Californians — or 40 percent of the state. Smart Care California is co-chaired by the state’s leading health care purchasers: DHCS, which administers Medi-Cal; Covered California, the state’s health insurance marketplace; and CalPERS, which manages pension and health benefits for California’s public employees, retirees, and their families. IHA convenes and coordinates the partnership with funding from the California Health Care Foundation.