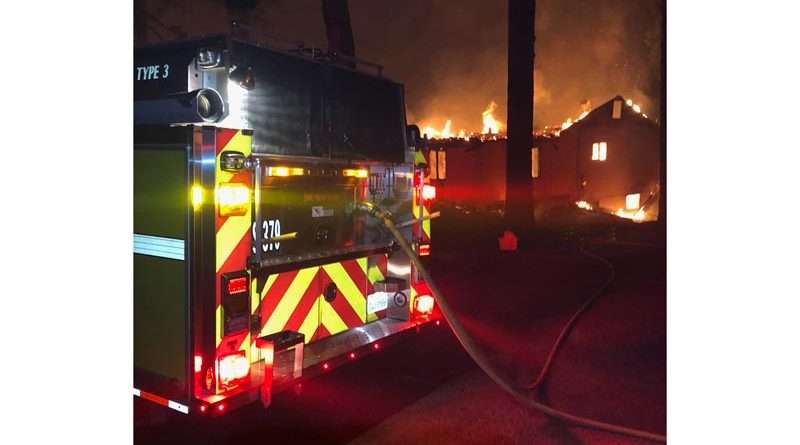 The Peninsula Fire Protection District was called on to dispatch OES Engine 379 along with a four-man crew on Thursday, Nov. 8, to the Camp Fire in the Paradise area.

The crew spent the first seven to eight days performing structure protection and active firefighting in the town of Paradise.

They were then assigned to provide patrol and mop-up operations in that area until they were relieved by a second PFPD crew Nov. 21.

The replacement crew worked mostly with patrolling and assisting search crews until they were released five days later.

In total, the engine was on the fire for 19 days with the last crew returning Sunday, Nov. 25.

Some people may not realize how difficult it is to adequately fund and equip a small community fire protection district.

The OES Engine used in this operation is a good example of using all options to support local fire protection.

The State of California Office of Emergency Services has a program that will give an engine to a rural fire department provided that department will dispatch the engine to designated “state fires” when called for.

That is also why the engine designation is OES 379.

It’s sort of a sweat-equity approach to acquiring a half million-plus dollar fire engine for the department.

It would take a lot of crab feeds to pay for that same engine.

Many thanks go out to the men and women that work to preserve life and property, whether it is here or in Paradise.

Speaking of crab feeds, don’t forget the Peninsula Firemen’s Association will be hosting its annual Crab Feed on Saturday, Jan. 12, at the LACC Restaurant.