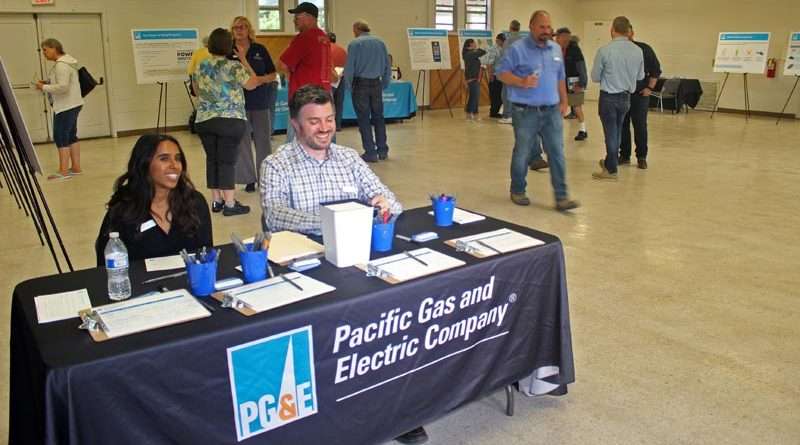 In response to the devastation wrought by the Camp Fire in Butte County, as well as being implicated by CalFire as causing several additional wildfires from malfunctioning equipment, Pacific Gas & Electric Company has instituted a number of new policy changes in addition to advancing programs designed to mitigate future property damage and loss of life due to wildfire.

Lawsuits have been filed against PG&E and other companies with $18.5 billion set aside as financial compensation for victims who lost homes, vehicles, farms, ranches and businesses or suffered an injury during the evacuation of the town of Paradise and nearby areas, for allegedly failing to maintain its high-tension wires and putting profits over safety.

The Camp Fire broke out in Northern California on Nov. 8, 2018, and became the deadliest and most destructive fire in the state’s history, with about 153,000 acres burned and 18,800 structures destroyed, according to CalFire statistics.

The Butte County Sheriff’s Office reported that the death toll from the Camp Fire was 85 people with 2 persons listed as still missing. At least three firefighters were injured battling the blaze.

Although seasonal fires are not unexpected, conflagrations have expanded in intensity and extent in the California wilderness due to such factors as climate change and an over abundance of dry fuel sources comprising mostly dead vegetation spread underneath the forest canopy, driving up state costs and increasing the risks to fire personnel and residents alike.

In an official news release, PG&E corporate relations spokesman Paul Moreno said that “given the continued and growing threat of extreme weather and wildfires, and as an additional precautionary measure following the 2017 and 2018 wildfires, PG&E is enhancing and expanding its Community Wildfire Safety Program to further reduce wildfire risks and help keep customers and communities safe.”

Toward that effort, PG&E has initiated a number of Community Wildfire Safety open houses as part of its public outreach program, including one at the Veterans Memorial Hall in Chester on June 13 that was well attended by area residents. Several placards were set up in the main room of the building, providing important information about fire risk, together with company representatives available to answer questions on policy changes.

Because the energy system relies on power lines working together to provide electricity across cities, counties and regions, the Public Safety Power Shutoff program is designed by PG&E to “proactively turn off transmission lines that pass through high fire-threat areas in the interest of safety to help reduce the likelihood of an ignition when extreme weather such as high winds (defined as sustained winds above 25 mph and wind gusts in excess of 45 mph) and fire danger conditions are forecasted,” which could also affect those who do not live or work in a high fire-threat area or an area experiencing extreme fire danger conditions.

Should there be a need to shut off power, PG&E said it would aim to provide early warning notification alerts to customers, municipalities, emergency agencies, police authorities and critical hospital facilities 48 hours in advance when possible and again shortly before power is turned off through the use of automated calls, texts, emails, social media channels and local news outlets, while also providing ongoing updates through its website at www.pge.com.

“We anticipate that a public safety power shutoff could occur up to several times per year in PG&E’s service areas,” said Moreno, but that it was almost impossible to predict with complete certainty when, where and how often weather and/or fire conditions would require it.

However, Public Safety Power Shutoff events may be canceled if forecasted weather conditions improve or fires are deemed contained.

Once extreme weather conditions have passed or a conflagration has moved on from the burn area, technicians will be employed to inspect the lines in affected regions before power is safely restored.

According to PG&E literature available at the open house, new and enhanced safety measures include conducting accelerated safety inspections of electric towers and poles through ground crews, or by drone or helicopter in addition to the company’s routine maintenance and inspection programs.

PG&E will further address overhanging limbs and branches to assure clearances are adequate, as well as removing dead and dying trees that pose a risk of falling onto power lines.

By 2022, the company plans to add a network of approximately 1,300 new weather stations to enhance weather forecasting, and the installation of 600 high-definition cameras that will increase coverage across high fire-risk areas to more than 90 percent, said Moreno

These technologies also go hand-in-hand with real-time monitoring and better coordination in prevention and response efforts from on-the-ground teams through the company’s Wildfire Safety Operations Center, staffed 24 hours a day during wildfire season.

Additionally noted at the open house are plans to install stronger and more resilient poles and covered power lines across nearly 7,100 miles over the next 10 years, and replace older equipment to further reduce the risk of malfunctions.

Residents should be prepared that power outages could last multiple days depending on the severity of the emergency situation, said company officials. It is therefore imperative that you and your family have an emergency preparedness plan in place.

In most cases however, Moreno said customers could expect power to be restored within 24 to 48 hours as crews work as quickly as possible to make repairs and reenergize the power lines.

An emergency preparedness plan consists of updating your current contact information with the energy company at pge.com/mywildfirealerts or call 866-743-6589; keeping hard copies of emergency numbers to take with you in the event you must leave your home; identifying alternative methods for charging your cell phone; and having backup power such as a generator for devices like your refrigerator and electric range.

Also consider buying a few battery-operated lanterns for lighting inside your home, and plan for the needs of pets and livestock during a blackout. Know how to manually open your garage door if it is electrically operated.

Of particular importance noted in one of the many handouts presented at the open house, is to identify the “unique needs of your family and loved ones as part of your emergency plan,” with the added emphasis to designate a meeting place in an outlying area for family members to later convene if they were separated at the time of an emergency, such as at a friend’s house or with relatives that still have electrical power.

Moreno stated that PG&E understood that the Public Safety Power Shutoff program could be inconvenient for customers and would create some hardship when it is implemented, but that the new policy was necessary in order to reduce the impact of wildfire to public safety.

“The reason PG&E is hosting a series of open houses throughout its service areas is because we think it’s worth informing the community as a way to keep people safe during critical fire conditions,” he said.

The more people learn about PG&E’s wildfire safety programs, as well as what actions to take when power is shut off during emergency situations, the better prepared everyone will be when the unthinkable strikes home.

Resources to plan for a Public Safety Power Shutdown

Disaster preparedness information from the U.S. Depart of Homeland Security

Remember that should you be ordered by authorities to evacuate during a emergency crisis, have ready a “to-go” emergency kit that includes: flashlights, warm clothing, towels and blankets, a portable radio, extra batteries, hygienic supplies: shampoo, soap, razors, toilet paper, and feminine products, disinfectant hand towels, first aid kit (w/pain medications), cell phone charger (consider a solar charger), up to $200 cash, medications in labeled baggies, emergency information and contact numbers, photocopies of your credit cards and driver’s license, a number of bank checks, extra eyeglasses or contact lenses, can opener, paper towels, cups and plastic utensils, paper and pens, matches in a weather proof container and/or a waterproof lighter, a spare set of car/house keys, packaged food/snack items/pet food plus a gallon of drinking water per person lasting at least three days to a week and refresh them once a year.