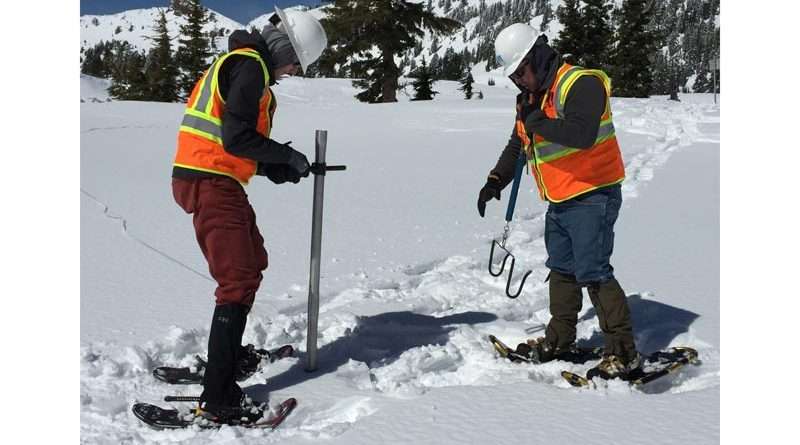 After a dry and warm early 2018, California’s water outlook was discouraging, with a snowpack calculated at only 23 percent of normal.

The recent historic drought had only ended last year, but the dry conditions had many thinking “Here we go again.”

Then, March storms did an impressive job of coming in like a lion, with several atmospheric rivers and cold fronts delivering snow throughout California’s mountains.

By early spring, the snowpack was up to 58 percent. And thanks to even better figures for rainfall, things are definitely looking up.

On March 27, PG&E hydrographers Ted Baker and Mike Hedgpeth took turns plunging a long metal tube into the snow in Lassen Volcanic National Park. The measurement came in at 11 feet of the white stuff. Just a month ago, it was only 6 feet.

When it melts, the water in this snow on the south slope of 10,440-foot-high Lassen Peak will drain into the North Fork of the Feather River and will be cycled through several PG&E powerhouses generating electricity as it makes its way to Lake Oroville.

PG&E conducts snow surveys in its hydropower watersheds from the Southern Cascades down to the southern Sierra Nevada Mountains using the data to forecast hydropower production for the year and better plan on how to manage the water, not just for clean and renewable power, but also for the benefit of fish and downstream users.

During the snow survey, Baker said the Lake Helen site at Lassen is the most difficult to measure snow in California, “because it is consistently the deepest.” In very wet years, snow depth exceeds 20 feet to as much as 28 feet, he said.

The snowfield can also form a layer cake of icy snow sandwiched between layers of snow. Breaking through those with a snow tube takes added effort.

“With the exposure to the sun right here, it will melt. When it snows it will melt down and make an ice layer and then you’ll get more snow going on top of that. So you’ll get multiple layers of ice that you have to bust through,” said Baker.

The data from PG&E’s snow surveys along with surveys done by the state Department of Water Resource’s and those of other energy companies, water districts and multiple other agencies all contribute and become input to the California Cooperative Snow Survey. The information provides the state with a critical tool to forecast water conditions for the year.