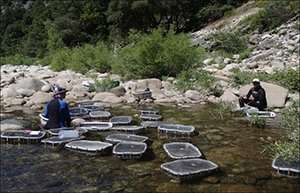 Frog-rearing pens on the Cresta Reach. It is hoped that the efforts of PG&E and its partners will help to re-establish and sustain the foothill yellow-legged frogs in one of their natural habitats. Photo submitted
News
July 28, 2020 Editor

For decades, foothill yellow-legged frog populations have been on the decline. Their numbers have dwindled due to a variety of factors: predation from invasive fish, bullfrogs and signal crayfish; development; changes to river flows; and a changing California climate.

PG&E, which operates hydropower dams in areas like the North Fork Feather River in Plumas County, for many years has managed flows to help protect the frogs. So when a program was developed to bring their tadpoles from the wild into a zoo and raise them to adulthood, PG&E became a natural team member with the U.S. Forest Service, U.S. Fish and Wildlife Service, California Department of Fish and Wildlife, the Oakland Zoo, and private researchers.

Andie Herman, an aquatic biologist at PG&E who specializes in frogs, is a member of the program team.

“This was the first captive rearing of foothill yellow-legged frogs and it came with several challenges. This population wasn’t doing well, but we have already seen increased breeding from an earlier phase of the program, and we are so excited to see what these captive-reared frogs will do,” said Herman.

Like in other habitats, the frog’s population has dwindled over recent decades in the Cresta Reach of the North Fork Feather River, which is a 5-mile portion of the river between the Cresta dam and Cresta powerhouse. Close monitoring by PG&E and its consultant Garcia & Associates began in 2002, documenting a decline that indicated this population was on the brink of local extinction. This was a concern, as the frogs serve as key indicators for the larger ecosystem health.

Three years ago, biologists began taking portions of egg masses from the healthy population in the downstream Poe Reach,and the Cresta Reach, and raising them in pens in the latter reach.  Each year, thousands of healthy tadpoles were released from the pens.

Last year, biologists brought some of the tadpoles to the Oakland Zoo, where they were cared for to adulthood. On June 30, 115 adult frogs were returned to the Plumas National Forest and released along the Cresta Reach of the North Fork Feather River and its tributaries.

“We are excited and optimistic that when we monitor the frogs next year, we’ll see an increase in egg mass counts, as well as more adult frogs basking on our beautiful river,” said Herman.

The Cresta reach has many sunny boulder-cobble bars, creating perfect breeding habitat for the frogs. Unlike most frogs that breed in pools, the foothill yellow-legged frogs like flowing water with protected pockets for breeding.

The work of PG&E and its partners is a fervent hope this homecoming for these frogs will be successful, ensuring their health and productivity to the benefit of the larger North Fork Feather River ecosystem.