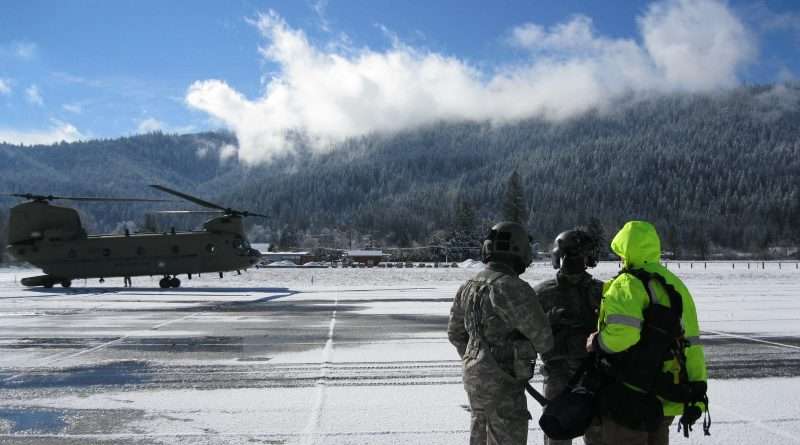 Phone and Internet service has been fully restored throughout the county.

The communications tower should be back in power by 4 p.m. today. Crews have been making repairs and should be evacuated from the mountaintops soon according to Sheriff Greg Hagwood.

Earlier today, A National Guard Chinook helicopter from Stockton attempted to take Mike Grant, one of the county’s highly regarded experts on its communications network, along with technicians from AT&T Wednesday to the communications site on Red Hill above Belden but were unable to land the large aircraft. Now the California Highway Patrol is sending up a smaller helicopter to get the technicians up to the disable communications tower.

The bulldozers that were being used Tuesday to clear the mudslides that closed the access road to the site as well as to the broken PG&E powerline that sends power to the communications tower, got mired in the mud and had to turn back. Work crews from AT&T are now also hiking in to try to locate and fix the problem with the powerline.

Work will continue today to fix the phone disruption that began yesterday. Though it was predicted that all phone service — landlines and cell phones in Plumas County — would be disrupted yesterday at 1 p.m., the disruption didn’t come until last evening. The situation was due to a power outage at a critical communications tower. It was reported that the backup generators malfunctioned and the service was relying on backup battery. The road to the site was damaged and attempts to get bulldozers to the area to repair the roads ended when the first dozer began to sink.

A helicopter, which was expected yesterday afternoon, is now expected to arrive about 9:15 this morning. The helicopter will be used to assess damage to PG&E lines and to lift technicians to the affected communication tower or towers. Yesterday, it was believed that just one primary tower was affected, but now it’s thought that there are multiple issues.

Landline service is impacted in many areas, with out-of-area calls receiving a message that they can’t be completed, while some local calls are still possible. AT&T cell phone service was still available this morning, which surprised Sheriff Greg Hagwood, who said that technicians thought that service would go down as well.

911 calls are being handled, though it’s been a moving target, as neighboring Lassen and Sierra counties are experiencing their own communications issues. Hagwood is optimistic that the improved weather forecast will allow the necessary repairs to be made.