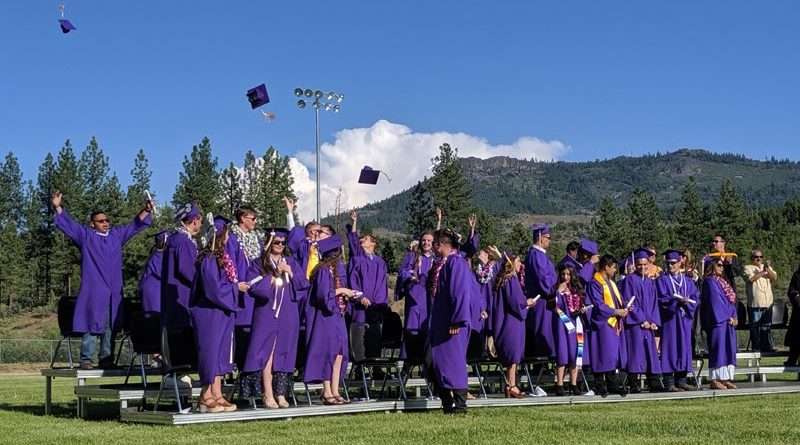 The event began with a processional, with graduates wearing purple caps proudly as they made their way to the podium on the field.

Graduates Madisen Boyd and Ziana Esparza warmly welcomed all in attendance, thanking parents for their endless hours of work and support throughout the students’ school careers.

“While we’ll always need you, it’s our job to take it from here,” said Boyd to the gathered families. “Here’s to the beginning of the rest of our lives.”

Graduates Alexandria Casillas, Fabiola Gabriel and Lesley Juarez repeated the welcome in Spanish, with each student taking turns adding their words of gratitude for all that it took to get to that day, looking back over the past 13 years of their lives and the many sacrifices made by their parents and loved ones to help get them there.

Graduates Hunter Cabral, Richard Johnston and Chandler Ross stepped up to present the Portola High School Golden Grad Class of 1969, seated in honor near the 2019 graduates.

“I wanted to start by saying, man, you guys look good,” said Cabral. “As you know, a lot of things have changed since you stood here in our spot,” he smiled. “Every possible thing you guys did for fun is now illegal.”

With laughter, he gave a thank-you to the class that was one of many that helped build the foundation of the school. “We hope in 50 years we look as good as you guys!”

The graduates then handed out certificates to each Golden Grad to rounds of applause.

Graduates Grace Bristol and Madeline Wilson told the class history. Both reminisced about the many memories formed over the years with their classmates, starting with the days of junior high.

“Who could forget junior year, when we pulled together our lip sync 10 minutes before the rally, when other classes had been practicing all week, and we ended up winning?” smiled Wilson.

“Our class has definitely had some interesting experiences, but we’ve also had really high points,” Bristol said, adding that to no one’s surprise, all of the graduates had completed their senior projects successfully. “None of them got lower than a B,” Bristol said. “That’s just how we are.”

Principal Sara Sheridan then introduced salutatorian Lauren Prince, who stepped up to the podium to cheers from the audience.

Prince spoke of her roots growing deep in the community over the last 18 years, and how every face is known to her. “It is not where I came from that makes me strong, it is who I challenge myself to be,” Prince said. “It is accepting my past and the mountains I had to climb, and not fearing what’s next.”

With emotion, Prince spoke of how it all went by “in the blink of an eye” and went on to thank those in the graduating class that helped make the road a bit smoother on the journey through high school.

“To the Class of 2019, this is it. Like all of the teachers kept saying, this is probably the last time we will all be together. I would like to thank everyone of you for the last 13 years. It feels strange to say goodbye to something so familiar,” Prince said. She went on to encourage her classmates that wherever they went, whatever they did, they shouldn’t “be afraid to make a splash!”

Valedictorian Grace Bristol then stepped up to address her classmates one last time, “Our 2019 class is pretty small, especially when compared to some high schools in Reno. But in the midst of us, we have so many different talents, opinions, strengths, and ideas. … “Kind of like car models — lots of different colors, designs, styles and shapes, all created different and designed for a specific function or purpose. What kind of car are you?”

Bristol went on to describe with humor the different choices that the graduates might all choose to make, saying, “What I do know, is that we will all be traveling on some kind of road that takes us to our future. You have infinite choices of where you are going to drive. Wherever you may be, you are important because you are you.”

Graduates Kyle Goodman and Jared Maddalena introduced keynote speaker Dave Martha. “We wanted to choose someone that had been with our class since seventh grade,” Maddalena said. “Dave and our class have many memories together.”

Goodman jumped in and said, “Dave is either on the radio or walking around. You may never see him, but you will always hear him. He is always helping the school out — if he sees someone struggling, he always stops to talk.”

Martha, longtime employee at Portola High School, then stood and moved to the podium, taking a moment to look at each and every graduate. “Well, that’s me!” Martha laughed.

“You guys know me well, and you should. We’ve been together at Portola High School for six years. I remember the first day you got here in seventh grade trying to open your locker. Some of you got it, some didn’t. Some of you I still have to help today!” Martha exclaimed to much laughter. “I was there with you when some of you were frustrated and wanted to give up, but you didn’t. I was there with you when you needed someone to talk to.”

Martha went on to give some words from the heart, saying, “Be sincere. Just be you, and know yourself, and that whatever it is you’re doing, make sure you like it and you’re happy. That’s what all parents want for their children. No matter what goal you have, remember again, be happy. That’s what we want for you. I’m a custodian, and I love my job because of you.”

Martha then explained that over the years, many students had asked him to give the key note speech, but he refused them. “You guys got me to get up here,” Martha smiled. “You made it, and I am so happy for you. Enjoy your day, you earned it!”

Each student stepped up to grasp their hard-earned diplomas to applause and cheers, and seniors moved their tassels to the right, indicating their status as graduates.

Lilly Baumbach and Lily Sampson gave the class farewell, thanking all of the teachers for their help, as well as those that had helped them get through high school. “As Winnie the Pooh once said, how lucky am I to have something that makes saying goodbye so hard,” Sampson said.

Graduates Fernando Avalos, Jorge Munguia and Perla Munguia then followed with the farewell in Spanish. With the band playing the “Portola High School Fight Song,” graduates sang along one last time. Congratulations, Class of 2019!