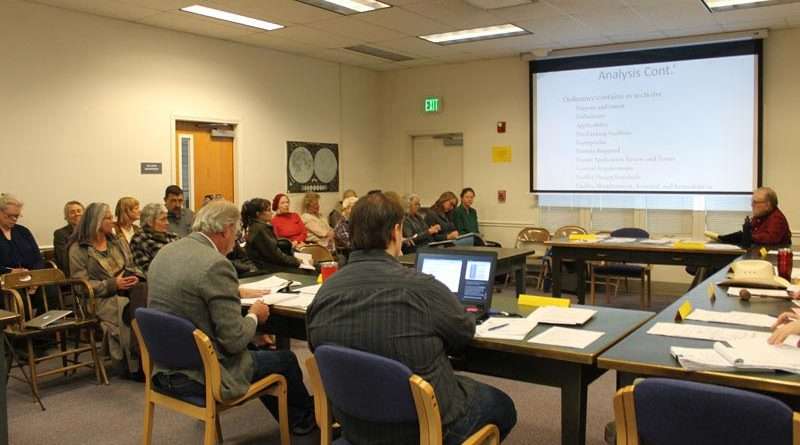 Concerned and interested residents attend a public hearing at the Plumas County Planning Commission on Thursday, Oct. 18, in the planning department in Quincy. The public hearing was one of the steps required to change a county ordinance on telecommunications. The ordinance now goes on to the Board of Supervisors. Photos by Victoria Metcalf
News
October 26, 2018October 25, 2018 Victoria Metcalf, Assistant Editor

Two Plumas County planning commissioners, the planning director and assistant director, and deputy county counsel walked out of a public hearing Thursday, Oct. 18, at 10 a.m., when a member of the audience refused to yield to the three-minute speaking opportunity set by the commission.

Soon after, a Plumas County deputy appeared at the meeting and actually requested one audience member to be quiet.

The meeting was standing room only in the planning department’s meeting room.

While the audience was respectful as the commission chair outlined the rules and Assistant Planner Tim Evans went through the draft ordinance outline, it soon dissolved into catcalls, boos, hisses and other disruptions, as attendees struggled to have their concerns addressed.

Abbott explained these rules prior to an open hearing on an ordinance amendment for Title 9 of the county’s code. This is the proposal that would allow telecommunications to expand with wireless opportunities.

Using a PowerPoint presentation, Evans went over some of the major points of the ordinance as written by himself.

Four commissioners voted to approve the draft ordinance as presented. Moorea Hoffman of Indian Valley was not present. Supervisor Kevin Goss recently appointed Hoffman to fill a vacancy on the commission.

The first major change came during the Clinton Administration with the Telecommunications Act of 1996, according to information compiled by Evans.

While this ensures some measures of control, it limited others, including allowing local agencies to prohibit the provision of wireless services. This also prohibited regulating radio frequency radiation emissions.

In 2012, President Barrack Obama signed into law the Middle Class Tax Relief and Job Creation Act. Within this act, local governments were prohibited from denying and must approve “any eligible facilities request for a modification of an existing wireless tower or base station that does not substantially change the physical dimensions of such tower or base station.”

Recommendations were published, as required by law, four times in the newspapers of record owned and operated by Feather Publishing in Plumas County.

According to the analysis, county code, telecommunications facilities are exempt from regulatory oversight by the county. This means that the FCC is in charge, according to Planning Director Randy Wilson.

The change within the code is that the ordinance would implement a set of standards for design and placement of telecommunications facilities in all unincorporated areas of the county. The city of Portola is the only incorporated area.

And there are many other recommended exemptions and changes. For a complete reading of the extensive draft, contact the Plumas County Planning Department at 555 Main St. in Quincy.

After discussing the ordinance changes, Evans said that he found there would be no significant impact to the environment. This comment drew laughter from the audience.

“We can’t even declare a moratorium,” Commission Larry Williams said about going around FCC regulations. And Wilson agreed, “We don’t have the ability to override the FCC.”

Commissioner Jeff Green said that money is at the heart of the difficulties, not locally, but with the companies that have the power to impact FCC decision-making.

Deputy County Counsel Gretchen Struh reminded everyone that locally there is control over the aesthetics but not the deployment of the operations.

Of concern to many are regulations on what is known as 5G implementation. According to Wilson, 5G is a long way off and its consideration is not included in ordinance changes.

5G refers to fifth-generation cellular wireless. Verizon Wireless has a form of it now available in Houston, Indianapolis, Los Angeles and Sacramento. But it’s believed that AT&T’s network will be available by the end of the year, according to PCMag.

5G is defined by its data speed and its encoding methods. 5G processes bring greater speed to move more data, are more responsive and will have the ability to connect more devices at once.

One of the concerns Hart and others voiced was that the commission didn’t allow for public input into the process. Hart said he believes there is a Brown Act violation in the process, but hasn’t had time to investigate that idea.

Hart said that the role of a good elected official is not to force his or her opinion on residents, but to listen to their concerns. Hart extended his meaning to include appointed officials as well.

As an example, Hart compared what was happening in planning the telecommunications ordinance to what happened with the cannabis ordinance.

And while he agreed that federal law must be followed, he believes that more recent regulations violates the U.S. Constitution and the rights of local governments.

To support this, he said that in California, while many areas were bending to federal regulations, Petaluma and Mill Valley have refused to follow those regulations.

Hart has been a part of those processes. He said that a county can insist on the least intrusive means for implementing new telecommunications, it can require an application to prove a significant gap in coverage, and it can regulate the power supply to wireless facilities.

Hart also said that telecommunications companies can be forced to follow the Americans with Disabilities Act and the California Constitution. He also added that the companies should be liable for future health damage because of an increase in wireless activities. “I tell people every day who call our hotline, ‘If you want to know what your rights are, don’t ask PG&E,’” he said. “The Planning commission has essentially asked the industry what our rights are.”

Other concerns of Hart and his backers are that companies would put Plumas County at risk of changing and not for the good. Aesthetics, an enhanced fire risk, less privacy, a decline in property values because of the threat of having telecommunication towers in residential areas, a threat to residents’ health and a negative impact on the environment are also included.

“Property values typically decrease by 20 percent when a cell tower is built nearby,” Hart said.

As to health issues, Hart said, “You can think of small cells as one-third the power of a macro cell tower — about 4400 watts — 120 small cells around the American Valley would be equivalent to 40 new cell towers, a huge exposure.” He added “And these are at close range.”

“Currently there is no neighbor notification requirement in the draft ordinance,” Hart stated. “We are urging a requirement that a mailed notification be sent to residents and landowners within 1,000 feet of any proposed wireless facility, as well as signage at the location.”

Plumas Residents for Safer (Wired) Telecommunications also recommend that maximum height should be 100 feet not the 200 feet in the ordinance. Under the draft ordinance, the maximum height for a tower is 200 feet in all zones, 150 feet in a military training route, 35 feet in residential zones, 15 feet for roof mounts, 50 feet for two-way radio antennas or televisions with receiving antennas, and 70 feet for amateur radio towers.

“Additional height may be approved with a variance,” according to the document.

This would minimize raptor deaths, as well as fire and aviation risks, Hart said. Raptors include all birds of prey: the American bald eagle, golden eagles, owls, hawks and others.

The group also believes that prioritizing wired telecommunications including cable, fiber optics and others is necessary. At this point Hart said they are not mentioned in the draft ordinance.

They want to remove the non-conformance section that would allow cell towers to remain that don’t comply with current building codes. This would include earthquake codes and others, according to Hart.

They also request that a certification by an engineer be in place that guarantees that poles won’t blow over or cause fires during high winds.

Also it is pointed out that public hearings aren’t required as part of the permit process. The “ordinance should spell out when hearings would be required and expand public oversight process,” Hart stated.

They also want at least a 1,500-foot setback from any residential dwelling for large cell towers and 500 feet from residential areas for small cells. Under the draft ordinance, it states that general setback requirements are one foot of setback for every foot in facility height plus an additional 25 feet. The setbacks might be reduced depending on the zone if the tower is to be located near an existing structure, if adjacent owners consent to the reduced distance or according to a variance.

Hart said that he thought it was clear that telecommunications representatives had visited the planning department in the last few months and they allegedly got what they wanted.

Stating she suffers from a condition known as electrical hypersensitivity, Garcia-Romero was very emotional as she told commissioners that she can’t find a place to live that isn’t affected. She is currently living in a tent at Frenchman Lake. There, all of her symptoms have gone away.

She lives in a tent, bathes in the woods and has to live close to the earth. But it’s getting cold and it’s becoming increasing less manageable. “I just want to find a little home,” she said.

She added that  her situation makes her feel isolated from others. Her family that lives elsewhere doesn’t come to visit and she wants to see them. “It feels like a kind of torture,” she said.

Quincy resident Rose Buzzetta said that she moved to Plumas County 42 years ago. She wanted to get her young son out of Los Angeles and raise him in a healthy environment.

Buzzetta compared what she believes the commissioners are doing to the days when big tobacco companies ruled American regulations.

She also compared it to when DDT pesticides were legal and that industry had a major foothold in determining  regulations. It was outlawed in the U.S. in 1972.

Things changed, but it took a long time for it to happen. “I implore you to be brave,” she said, so that residents can be safe.

Heidi Rose was another of the residents who spoke out. Identifying herself as a young professional, she said that “I might be young but I know that health is health.”

She has watched as her friends have become sick and are now on the run from sources producing EMFs (electro magnetic forces). Devices include cell phones, computers, towers and other things.

Rose told commissioners that they are participating in the largest biological experiment even known.