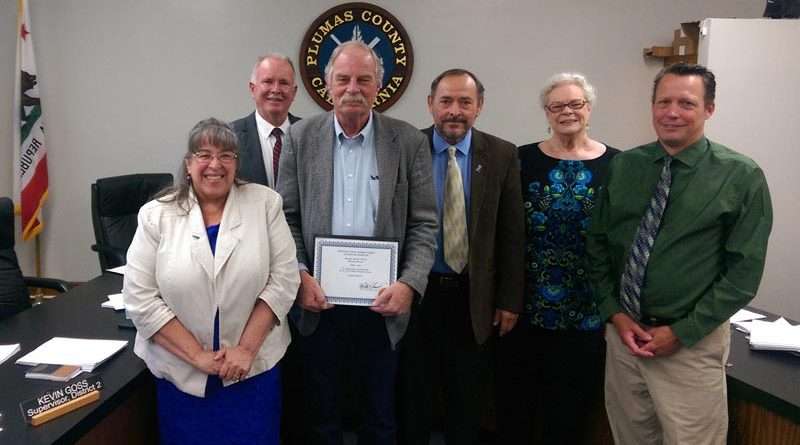 The moving van was being packed and soon retiring Plumas County Planning Director Randy Wilson and his wife Melody would be leaving the mountains of Plumas County behind and heading toward Florida’s beaches.

Wilson was presented with a certificate of appreciation for the years he had served Plumas County as first a planning contractor and then as director.

“It’s an honor to have been the planning director,” Wilson told a full house Tuesday, July 2.

Working for the people of Plumas County hasn’t always been easy, he told people assembled in the Supervisors’ meeting room, but it’s been rewarding.

Sheriff Greg Hagwood was the first to thank Wilson for his assistance over the new jail. “Randy has helped me more about these issues than I ever thought I’d know.”

Hagwood said that Wilson was very instrumental in writing the grant that gained Plumas County $25 million for the new jail.

Office of Emergency Services deputy Nick Dawson said that Wilson had been a big help with all of the disasters Plumas County has had over the years.

Bob Perreault, director of Plumas County Public Works, told Wilson that it was an honor to work with him.

Plumas County Director of Environmental Health Jerry Sipe said that it was an honor working with him.

County Counsel Craig Settlemire said he appreciated the opportunity to work with Wilson and the challenges they had encountered in planning department-related issues.

Settlemire said he thought Wilson and Assistant Planning Director Becky Herrin made a good team. They worked diligently on the county’s general plan, withstood the five years that a portion of it was in litigation, and eventually got to see their work supported in the courts.

County Administrator Gabriel Hydrick said he had only worked with Wilson a few months, but he “quickly got a sense of his passion and his wisdom.”

Hydrick said he was really sorry to see Wilson retire. “He left me wanting to learn more from him,” he said. “Five months was too short of time.”

Supervisor Kevin Goss said there was a whole plethora of things he could remember Wilson doing.

Goss said he was particularly pleased that Wilson was able to redirect some of the state’s Proposition 50 funding to Greenville projects.

“I don’t think we’ve got into any kind of a fight,” Supervisor Jeff Engel told Wilson.

Engel said he saw Wilson stand tall to general plan litigation. He also apologized for what he called the gruesome cannabis-working group.

“I wouldn’t even know where to begin,” said Supervisor Sherrie Thrall.

Thrall praised Wilson for being what she called solution-oriented. Rather than saying no, she said he took the approach that he wanted to find a way a situation could work.

Thrall also said that supervisors never “offloaded something onto Randy that he didn’t bring his vast knowledge to.”

Supervisor Lori Simpson said that Wilson was always very professional and that she had learned a lot from him.

Simpson said that, “you were always available.”

Supervisors spent two days in June interviewing potential planning director replacements. The selection has not been announced at this time.