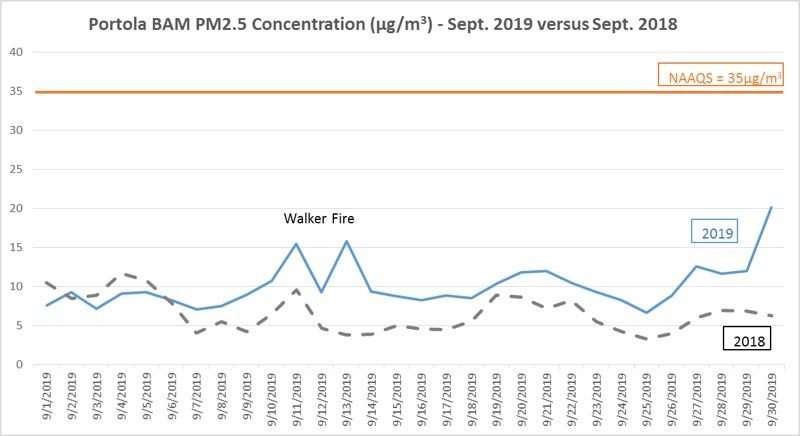 Levels of PM2.5 during September were similar to September of 2018, remaining well below the national standard. Graph courtesy of NSAQMD
News
October 30, 2019 Lauren Westmoreland, Staff Writer

The Northern Sierra Air Quality Management District released the air quality update for September, with not a single daily exceedance for the National Ambient Air Quality Standard (NAAQS) for particulate matter, or PM2.5.

Fortunately for Plumas County, smoke from the Walker Fire drifted predominately east, toward Lassen County. There were a couple of days, though, when the wind direction changed and impacted all three monitoring sites.

Lightning strikes at the beginning of September ignited some fires that were quickly suppressed.

In the last couple of days in September, temperatures dropped in Portola, leading to increased levels of PM2.5 from wood stove combustion, but overall, most of the region had below normal to average temperatures.

This region is expected to be warmer and drier than normal through the month of January, per Northern California GACC, 10-1-19.

The EPA Air Quality Flag Program will start up again Nov. 1, with students raising a flag at Long Valley Charter School to notify the public of the expected air quality.

Suggested actions to protect health are described based on the flag color, known as the Air Quality Index.

With students continuing the initiative throughout the year, the green flag was flown almost all month to let the community know that air quality was good for all individuals. The yellow flag was raised just a couple days in September due to the smoke from the Walker Fire.

The city of Portola passed Ordinance No. 354 on July 24.  All open burning of yard waste and debris is banned within the city limits of the city, with some exemptions including recreational and/or ceremonial fires.

There was no open burning allowed in September. On Oct. 3, CalFire lifted the burn ban in Plumas County, with a burn permit from CalFire, USFS or another authorized fire agency required. Permits may be obtained online at burnpermit.fire.ca.gov.

For more information on air quality or to inquire about the ongoing Greater Portola Wood Stove Change Out Program, call 832-0102 or visit myairdistrict.com.