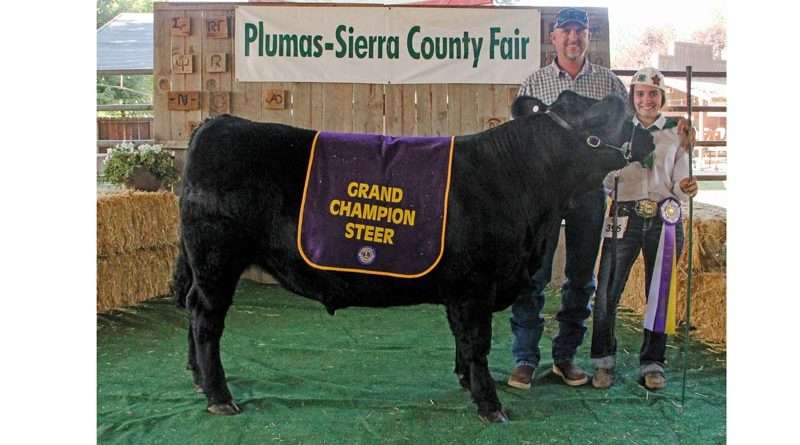 The annual 4-H and Future Farmers of America Junior Livestock Auction at the Plumas-Sierra County Fair on Aug. 18 rewarded the participating Plumas and Sierra youngsters with yet another nice payday for all their hard work and effort they put in over the course of the better part of the year raising their animals.

Collectively, buyers this year generously spent $218,972 on 126 animals and that amount doesn’t include any price bumps donated during the sale.

As they have done for years, Dr. Steen Jensen and Dr. Chris Kennedy guaranteed to price goats at $8.25/lb. and bumped the sheep up to $6.25/lb.

Year after year there are always lots of multiple buyers ready and willing to open their checkbooks.

Also representing the Indian Valley 4-H group was Kaidyn Holland who sold her 293 lb. grand champion swine to NAPA-Sierra for $7.50/lb., amounting to $2,197.

Impressively, for the fourth consecutive year, the grand champion lamb honors went to Justus Emsoff of the Sierra Valley 4-H. The 122-lb. sheep sold to Susanville Ford who paid $8 lb., $976.

And just like last year, Anela Caudle from Echo 4-H raised the reserve champ sheep, a 124-pounder, bought by Gregory Engineering for $7.50/lb., $930. This was also the showmanship and round robin winner in that division.

For the second consecutive year, Louis Siqueido raised the grand champion goat and showmanship winner. Les Schwab Tires of Portola paid $10.50/lb. for the 75-pounder worth $787 for the Loyalton FFA member.

Indian Valley 4-H’er Kadee McKinney sold the reserve champion goat to Andrew Clarke for $10/lb. It weighed in at 78 lbs. and earned the Loyalton club member $780.

Fetching the highest price per pound on the day, $61, was James White’s pen of meat rabbits. The American Valley 4-H’er sold it to Susanville Ford for $628.

Many buyers donate their purchase(s) back to the auction to be resold for the benefit a particular cause.

As they do year after year, Bresciani Insurance and Bresciani Ranch donated back to the Mac McElduff Foundation.

And continuing with their valuable contribution was Indian Valley Construction, Charlie and Marylynn Neer and Neer Custom Cut and Wrap donated animals back benefiting the Clayton Neer Memorial Fund.

Indian Valley Construction and Ron Wilson once again donated their purchases back for resale to benefit the Quincy Rotary Club’s livestock restoration project at the fairgrounds.

Others who contributed to the success of the sale included Plumas-Sierra Telecommunications that sponsored the auctioneer’s services. The Plumas County Sheriff’s Employees Association picked up the tab for the buyers’ breakfast and Alpine Beverages provided drinks.

And the ever dependable and enthusiastic auctioneer, Wesley Neer, once again did a fantastic job working a generous crowd of buyers throughout the day.

Andrea White, president of the sale committee, expressed her appreciation for all those who helped make the day so successful for the 4-H and FFA youth. “We couldn’t have done it without them,” she said.