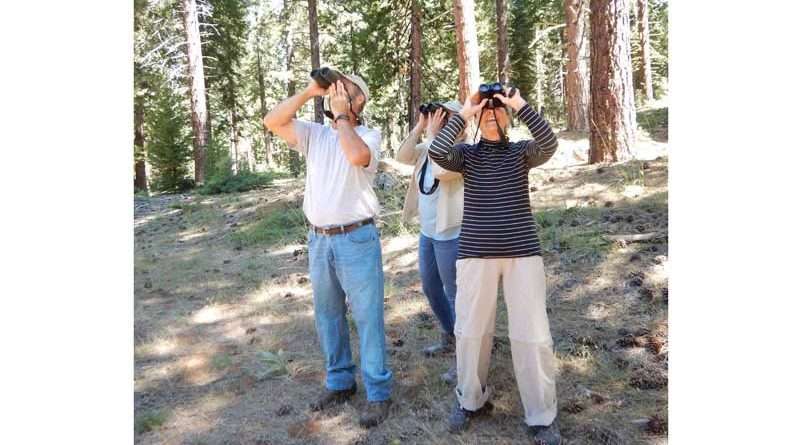 From left, Scott and Amber Edwards, with Janet Swirhun, train their binoculars to observe a variety of birds commonly found in Lassen Forest during the Plumas Audubon Society Bird Walk on June 29, including a western wood pewee high in a pine tree. Photos by Suzanne McDonald
News
July 17, 2019July 12, 2019 Stacy Fisher, Staff Writer

One of the many recreational opportunities in our region that make the Lake Almanor Basin Area such a great destination includes such pastimes as an enjoyable day hike with friends through the forest canopy surrounding the lake.

Suzanne McDonald of Plumas Audubon Society (www.plumasaudubon.org) led a group of 19 hikers and one dog the morning of June 29 for the Audubon’s annual bird walk in Chester.

Bird watchers first met just off Hwy. 36 at the east end of the causeway at the Last Chance Campground turn-off, located across the street from Northshore Campground and carpooled from there before they started their hike on a trail skirting the Northshore end of Lake Almanor.

Several birds were singing high overhead in their perches in the tree branches, McDonald shared, adding that some of the bird lovers were lucky enough to spot a Western Tanager — “a neo-tropical migrant that comes to the conifer forests from the tropics to breed,” she pointed out.

“As always, the birds were elusive except for the easily seen water birds that were viewed through telescopes,” provided by Plumas Audubon Society members Scott and Amber Edwards, who were also in attendance that day.

“Many other favorite birds were seen along the causeway as well,” McDonald continued, such as white pelicans, bald eagles, Canada geese, western grebes, and many, many gadwalls (essentially ducks).

“The loud calls of the northern flicker were heard throughout the day and the frequent buzzing trill of a western wood pewee (a flycatcher) was also heard,” she added.

“An immature bald eagle accompanied us overhead at frequent intervals as we walked along the trail — first through the woods and then overlooking the lake, and finally hiking down to lake level.”

If the birds were hard to spot, the mosquitoes certainly were not, she lamented.

Nevertheless it was a great day for birding, and “everyone was thrilled with the early morning hike.”