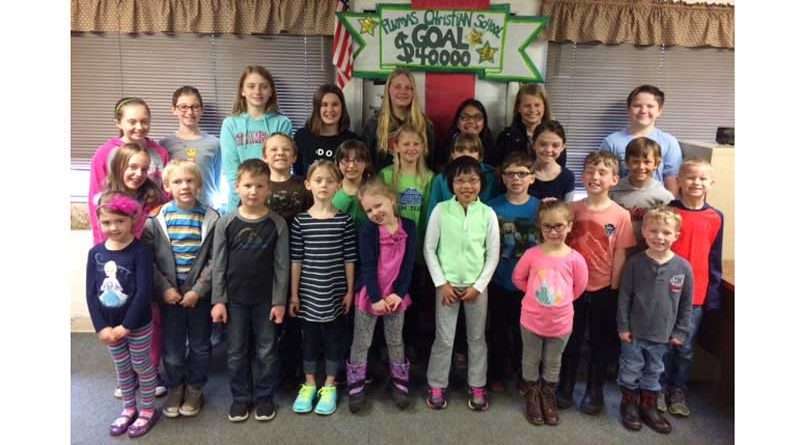 Students from the Plumas Christian School pose with their banner setting a $40,000 fundraising goal last year. They actually raised $60,000, which is the goal for this year’s event.
News
February 20, 2018February 15, 2018 Debra Moore, Managing Editor

Students have the chance to keep their principal “locked up” for 24 hours and hope to raise $60,000 in the process.

The popular fundraiser hosted by Plumas Christian School is returning for its second year, and will keep the principal locked up for 24 hours, as long as at least one donation comes in each hour around the clock.

“Raise UP Plumas Christian School and Lock IN the Principal” is from noon on Friday, Feb. 23, to noon on Saturday, Feb. 24.

The event has a twofold purpose.

“We want to raise awareness about the existence of Plumas Christian School for families considering Christian education for their children,” Little said, “and we want to ensure the future financial sustainability as a private institution that relies solely on tuition and donations to provide Christian education in Plumas County.”

Little explained that the school receives no government funding, so the only income is through tuition and donations.

Those who want to contribute can bring their donations into the school during the 24-hour period, or make a donation online by going to plumaschristian.org.

For those who bring their donations to the school, there are extra incentives including tickets to win a spirit package that includes apparel and pizza.

Tickets will be awarded based on the time that they are brought to the school. Those who contribute in the wee hours of the morning will be rewarded with more tickets.

In addition to the drawing, a prize package will be awarded to the individual who makes the largest donation.

Those who bring a donation between 5 and 7 p.m. Friday evening can enjoy a baked potato dinner with the principal.

Little hopes that this will be a fun way for the community to become involved in the fund-raising effort and it’s also an opportunity for families to tour the school.

Plumas Christian School currently serves pre-kindergarten through sixth grade, with the hope that some day it will be able to serve middle school and high school students as it has in the past.

Plumas Christian School is located at 49 South Lindan Ave., across from the Safeway shopping center. Donations may also be mailed to that location. For more information on the school or the fundraiser call 283-0415.