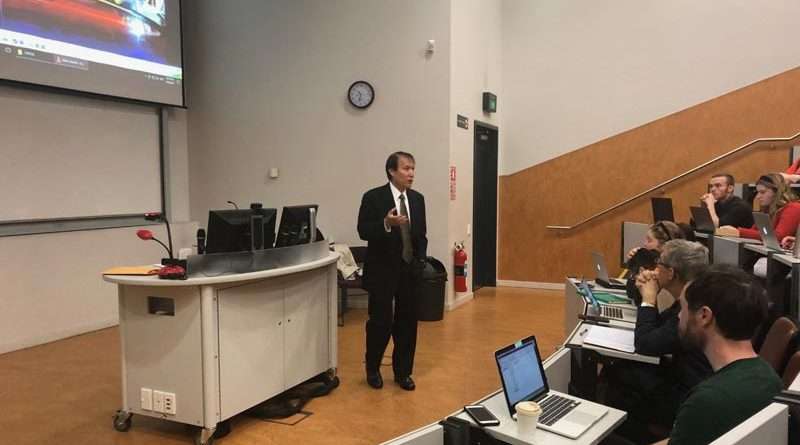 Plumas County Sheriff’s Deputy Ed Obayashi wears many hats as an attorney and a cop (as he calls himself). This summer he was invited to lecture at Victoria University of Wellington in New Zealand. Obayashi spoke to law students about the differences and similarities in law enforcement systems. He said some who attended his lecture traveled two-and-a-half hours to hear his presentation. Photo submitted
News
November 6, 2019November 5, 2019 Victoria Metcalf, Assistant Editor

One Plumas County Sheriff’s deputy is no stranger to the life down under — Australia and New Zealand that is.

When he was invited to combine business with a visit to his daughter in Wellington, New Zealand, he jumped at the chance.

Deputy Ed Obayashi, wearing one of his many hats as deputy, attorney and law enforcement representative with various associations, went on this trip as an educator.

New Zealand might be a hemisphere away, but its legal system isn’t far removed from that in the United States — its common factor is the legal system as it was originally developed in England, Obayashi explained.

Obayashi said during the past few years he was a liaison with a New Zealand attaché in a Washington, D.C. law enforcement division. He then met with New Zealand’s federal policy makers and discussed mutual law enforcement topics.

With his daughter living in that nation’s capital of Wellington, Obayashi said he found himself visiting there over the last few years. But it was his connections — those he made in the U.S. and those in New Zealand — that landed him a special invitation to speak to a group of attorneys and law enforcement students.

It was one of these connections that presented him with an invitation to present a guest lecture on privacy issues in law enforcement. “And of course my favorite — use of force,” he said about some of the topics he was to discuss. “It was quite flattering,” Obayashi said.

Some of the prosecutors that attended his large lecture group traveled for as much as two-and-half-hours to hear him speak at the Victoria University of Wellington School.

While Obayashi was becoming quite familiar with parts of New Zealand on previous trips, the guest lecture offered a new perspective.

Obayashi said, “I base my lectures on what I feel is appropriate.”

“I’ve learned throughout my career that the world is fascinated with us,” Obayashi said. Some of it’s the dazzle of Hollywood, but there is an intense interest in so many other aspects, he explained. “We’re alike in so many ways.”

Like Australia, many of New Zealand’s original settlers came from England. That means that those countries have a legal system that is similar to the British legal system. And so does the United States, Obayashi explained. “So a lot of the concepts and the laws are similar from a philosophical standpoint.”

When asked about the major differences in systems of law, Obayashi said, “There really aren’t a lot I can identify in differences.”

However, one of the major differences is that Australia, Japan and New Zealand have a national police force. “The U.S. is unique in that we don’t.”

The New Zealand Police, called the Nga Pirihimana o Aotearoa in the native Maori language enforces the law. New Zealand’s national police force is a “one size fits all,” he explained. In the United States, each state has its own law enforcement system based on federal regulations but with the inclusion of local laws that meets with the majority of ideas of its citizens.

“We don’t care what San Francisco does. They have their own policies,” he said. And that example further defines how our law enforcement is broken down by state, then county and finally cities.

And in Australia, it’s the Australian Federal Police that is responsible for law enforcement.

“There are advantages and disadvantages of not having one,” he added about our system. Although the U.S. has the Federal Bureau of Investigation, its role is different from a national police force as realized in the other mentioned countries.

“My lectures had to compare and contrast the legal challenges that both systems present,” Obayashi explained.

“We don’t want a police state,” Obayashi explained. That philosophy is essentially ingrained in most of us. “Every community has a right to manage its own affairs and elect its own sheriff,” he said when talking about counties. And “every community has different standards.”

In New Zealand people don’t typically carry firearms, Obayashi said pointing out a difference. In California, citizens don’t openly carry firearms, but they can get a permit to carry a concealed weapon provided they can meet the legal requirements. And throughout the U.S. law enforcement officers are armed.

Australian state and federal police more closely match trends in the U.S. They carry firearms, a Taser, a baton, handcuffs and other necessary gear.

In Japan, citizens are strictly regulated. They cannot carry or possess firearms or swords. Law enforcement officers are not armed but they are highly skilled in martial arts.

And in the United Kingdom, police officers don’t carry firearms. If they’re needed, officers trained with those skills are used.

This was Obayashi’s fourth visit to New Zealand and he said he feels very safe there. Armed with a computer and a cell phone, that’s all the personal protection he feels he needs.

Obayashi is no stranger to this down under part of the world. Long before he became a deputy, he lived in Australia.

The two main islands are about 1,000 miles southeast of Australia. The islands are referred to as the North and South islands and also include several small islands.

The population of New Zealand is under 5 million, according to 2018 figures.

According to the Encyclopedia Britannica, the country is known for its contrasts. It has active volcanoes, caves, deep glacier lakes, fjords and sandy beaches.

Like Australia, it’s noted for its unique vegetation and animal life.

New Zealand, the largest country in Polynesia, was annexed by Great Britain in 1840. But just 16 years later it became a self-governing colony. In 1947 it was fully independent.

Getting to know Wellington

Wellington is New Zealand’s capital. It’s located near the tip of what’s known as the country’s North Island, which, if looking at a map, is the top island.

Wellington is named for Arthur Wellesley, the First Duke of Wellington. It is known as Te Whanganui-a-Tara in its native Maori language.

Wellington is the country’s second largest city with a population of less than 420,000.

According to Wikipedia sources, it’s a temperate maritime climate and beats Chicago as being the world’s windiest city.