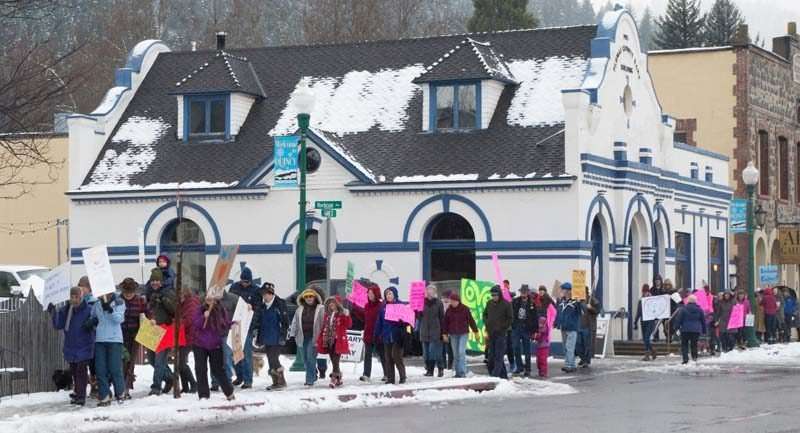 The Women’s March on Washington and its sister marches totaled approximately 2.9 million participants Saturday, Jan. 21, according to news organizations.

In the United States, 673 sister marches were registered with the website womensmarch.com, but spontaneous marches also popped up including one in Quincy.

Millions more marched around the world in solidarity — the largest one being in Paris and one of the most notable being aboard a ship near Antarctica.

Plumas County women (and men) even went to Washington D.C., but most stuck to the coast, with residents traveling up to Seattle and down to the Bay Area. The heaviest concentration went to Chico and Sacramento.

Well over 100 Plumas County residents took part in the rally on the courthouse steps at some point between noon and 5 p.m. on Saturday. Some had originally planned to travel, but were stranded by road conditions.

Many brought their children. “I went down to the march for her, so she could be a part of history. She especially had fun helping us build a monstrous snowman,” said Quincy participant Carol Dunbar.

“I marched today because freedom is my right and human rights are crucial to our freedom!  Stronger together,” said Elizabeth Page.

Amber Hughes, the organizer of the Quincy event said, “I organized the Plumas County Million Woman March to give a voice to a region in California that often goes unheard. For us this march generated a sense of global cohesiveness. Most of all, I want to make a lasting impression for my daughter through leading by example.”

“Why I marched: I strongly believe that the new administration in office promotes everything that our country goes against. I feel that it is our duty to speak out against hate and discrimination, and to speak out in support of marginalized groups,” said Keely Nesbit.

“I marched to preserve quality education for all of our students. President Trump’s nominee for Secretary of Education, Betsy DeVos, supports school privatization. Eighty-five percent of American children attend public schools. ‘School Choice’ is costly, and it will hurt our neighborhood public schools,” said Nancy Sipe.

Plumas County citizens were in full force at the Sacramento rally on the steps of the state capitol. City police and organizers said roughly 20,000 to 25,000 people attended. It was standing room only and difficult to get from one end of the mall to the other. Still, many could see the Plumas County signs.

One Plumas County mother said, “It’s important that my child see that this is just not a few people she knows in Quincy and Greenville protesting, but a bigger worldwide voice.”

Brooke Rahn, originally from Greenville, came to Sacramento for the march and said, “For me, to march on Saturday serves

several important functions. Number one, it brings me together with family, friends and reminds me of the network of support and protection we have in our community. This is vital as we navigate through an uncertain and dangerous time in American history. I need to know that there are people out there that will stand up for my rights and safety and that I will do the same for them.”

The signs were a fun aspect of the march. In many cities, an archival effort is being made to preserve the signs.