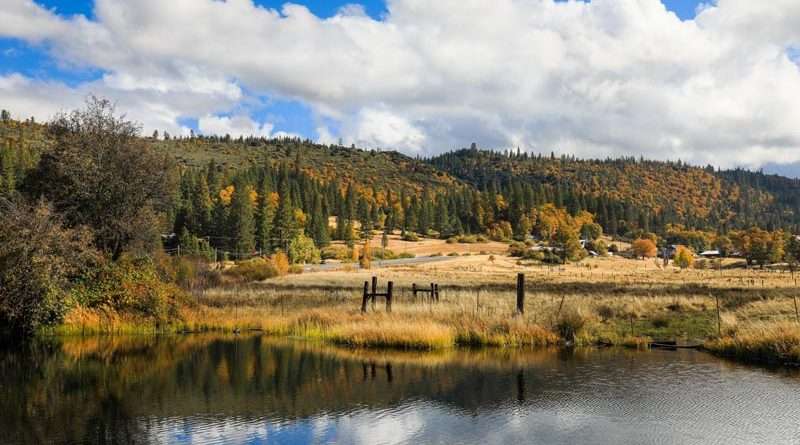 This view of Greenhorn Creek is one of many stunning photographs helping Plumas County compete for Nikon’s nationwide annual best fall color contest. The publisher of CaliforniaFallColor.com recently visited our region for a personal tour to experience the Lost Sierra’s fall glory and encouraged local photographers to keep taking pictures of our breathtaking scenery for submission to his site and social media outlets. Photo by Michael Beatley
News
November 27, 2019November 26, 2019 Roni Java, Staff Writer

When the phone rang at his Meadow Valley home on a recent Friday, award-winning local photographer Michael Beatley had no idea he was about to be surprised with two interesting events.

First, it started with a request from John Poimiroo who edits and publishes an acclaimed blog and online photo gallery at www.CaliforniaFallColor.com. The site has been a seasonal treasure and visual treat for over 10 years that reports about autumn’s showy colors, textures and vistas throughout the Golden State.

Poimiroo was calling to ask Beatley for company on an expedition with high hopes of seeing some of the Lost Sierra’s most photographic scenery at its peak.

“Plumas County has some great fall colors and John wanted to see these places for himself,” Beatley said. “Quincy and our communities are well known as one of the best fall color destinations in California.”

A professional photographer and owner of Meadow Valley Design Photography, Beatley has lived here since 1983 and said he knows Poimiroo, a travel writer, because he’s been submitting photos to the website for half a decade.

“I’ve loved it here all these years,” Beatley said, explaining that he shares his work to promote tourism in the Lost Sierra and to help our local economy.

Beatley’s work documents Plumas County’s breathtaking landscapes and hometown charms and he has been in excellent company among many talented photographers throughout California who help populate the fall colors website with images. Locally, contributors include shooters Karen Kleven, Kevin Mallory, Mike Nellor, Jeff Luke Titcomb and others. Titcomb also promotes tourism for the region through his work with the Shasta Cascade Wonderland Association.

Poimiroo issues the “California Fall Color Report” every autumn through Thanksgiving Day and sends it as a news service to over 700 California weather, travel, outdoor, and news reporters and editors. The media outreach results in widespread interest in Plumas County and other regions where fall colors bring people out for leisurely drives and stopovers.

So calling Beatley for a photography meet up was a high compliment to Plumas County’s scenic wonders. But it wasn’t the only reason for making the drive.

Poimiroo was on a mission.

He wanted to gather images inspired by the submissions he’d been receiving for so long from this area — and to encourage more entries in a special fall colors competition.

“There have been several Plumas County photographers who have sent in great shots over the years,” Poimiroo said after his visit. “Michael and Jeff are currently the most consistent contributors from this area. I wanted to get the word out that Nikon was running a nationwide contest through early November in which they were measuring the popularity of states, based on their fall colors and the appearance of a (specific) hashtag keyword on various social media sites.”

The blogger said anyone who created a photo of fall color and posted it to Facebook, Twitter, Instagram or other social media with the hashtag #NikonFallCA automatically entered their state in the contest. Every image would be counted.

“The contest ran during peak color for Plumas County, so I don’t doubt that your county has contributed to California’s ranking,” Poimiroo commented, adding that the competition was open to photographers using any camera equipment, not exclusively Nikon, even phone cameras. (Results were not available by press time for this story.)

Poimiroo relies on fellow “color spotters” to do justice to California’s lush fall color displays each year. He said Michigan had won the Nikon contest for the last three years and he was hopeful California photographers would give the champ a real run for the money this year.

Beatley agreed Plumas County has a lot to be proud of when it comes to vivid, scenic fall colors. So when Poimiroo called, he set up an ambitious itinerary and off the photographers went.

Surprises out on the trail

“We did the Plumas County Courthouse, the Methodist Church and the Judge Alan Theiler maple tree downtown,” Beatley said, ticking off some local iconic shots. “Then we went out on the Spanish Creek Trail. You follow a dirt trail and go upstream to Oakland Camp and the waterfalls. It’s the best trail of all.”

Poimiroo had to agree. And they weren’t the only ones out to discover this local favorite for themselves.

Beatley’s second interesting event of the day happened on the trail when he and the travel writer, whose website has been judged “California’s Best Outdoor Medium and Internet Site,” encountered two families from the Sacramento region.

Hiking and taking shots as they went along the creek, Beatley and Poimiroo met the Ghandi family from Rocklin, the Velusami family of Roseville and the Govindasamy family from Folsom. They were all dedicated fans of Poimiroo’s CaliforniaFallColor website and had followed the advice to “GO NOW!” before the fall colors faded.

“It was (totally) coincidental that they happened to be where we were,” Poimiroo chuckled afterwards.

Writing on his blog, he said, “At Spanish Creek, Michael and I stopped to joke about their tantalizing picnic feast that was spread out on a blanket at the trailhead. They were enjoying the lunch before hiking up the trail a half-mile to see Indian rhubarb.”

It turned out that Beatley’s photos, in particular, drew them to come up and see the natural beauty for themselves.

Rounding out the adventure, the two photographers headed to Thompson Valley, Meadow Valley and Bucks Lake Road before the shooting day was done.

Poimiroo offered special appreciation on his blog for all the local contributors who help celebrate California’s visual feast every fall, saying, “To all our readers and fans, thank you. Thank you for your loyalty to the site and the many contributions you make, sharing the beauty you’ve seen with other fans of fall color.”

No matter what their subject may be, all photographers are chasing light and searching to capture the perfect constellation of highlights, shadows, depth, composition and character. They want a shot with impact, one that speaks to them and to their viewers.

With luck, the perfect shot will also sing and resonate.

If you are interested in sharing your beauty shots of the Lost Sierra for a wide audience, become a “color spotter” for the recognized media outreach gallery and blog at www.CaliforniaFallColor.com.

Details and submission requirements are available on the site.

Light: Capitalize on the best lighting conditions you can find. Ideally, take photos in the early morning or late afternoon, also known as the golden hours for photography. These are the periods of daytime shortly after sunrise or before sunset, during which daylight is redder and softer than when the sun is higher in the sky. The opposite period occurs during twilight, which is the blue hour, just before sunrise or after sunset, when indirect sunlight is evenly diffused.

Composition: Learn how to compose pleasing photos by working with the composition of your subject, especially the “rule of thirds,” one of the fundamentals of painting and photography. This technique helps artists and photographers build drama and interest in a piece by using an imaginary grid divided into nine squares of equal size, with two horizontal lines intersecting two vertical lines. Don’t center your subject. Place your landscapes and other subject matter within the grid and orient them along the major lines, instead of directly in the middle of the screen, to create a dynamic composition. Play with angles.

Subject: Find and photograph things that interest you most. If you are drawn to a particular subject, a person, a location or an event as it unfolds, chances are other people will be interested in those images, too. Whether it’s people, places, animals, festivals or fun things like decaying old cars, rusty cans and abandoned buildings, follow your passion and you’ll bring home interesting images.

From Roni Java and Michael Beatley.