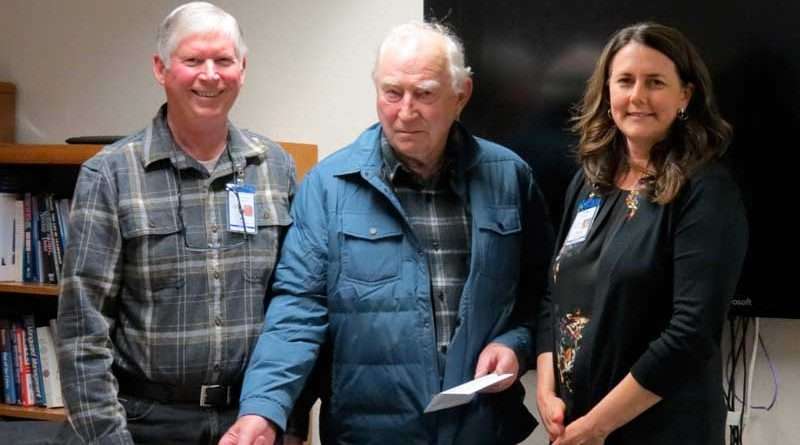 Receiving a $100,000 check is a nice way to begin a meeting, and that’s what happened Jan. 4 at Plumas District Hospital.

Klement suggested the following allocation: $40,000 for radiology, $30,000 for the lab and $30,000 for the emergency department. “We want it spent on something permanent,” Klement said of the funding, before presenting the check to Bill Wickman and Tiffany Leonhardt, who are the president and vice president, respectively, of the foundation.

The hospital board elected Valerie Flanigan to serve as its chairman and Bill Wickman to serve as secretary for 2018. Flanigan succeeds John Kimmel who served as chairman for the past two years. Kathy Price and Mark Satterfield also serve on the board.

Soon it will be even easier to see a doctor at the hospital clinics. Dr. Jeff Kepple, the hospital’s chief executive officer, said that he and the leadership team are working on a “prompt care program” that would provide same day service to patients. “To an extent we are already doing that with our express visits, but we want to take it up a notch,” he said.

The hospital clinics allocate slots each day for “express” care, which is made available to patients who meet certain criteria. Under the new program, the time allotted for same-day patients and the conditions under which they could be seen would be expanded. Kepple said that while there could be a walk-in component, it’s preferred that patients call in so they can be worked into the schedule.

Kepple also discussed the hospital’s success with transitional care and his desire to expand that program as well. “I see it as a program that can stabilize hospital finance and do something that we do very well,” he said.

Transitional care is required by patients who no longer need “acute” care, but aren’t ready to go home. It provides a higher level of care than a skilled nursing or rehabilitation facility.

Kepple has met with regional hospitals, such as Renown in Reno, to make them aware that Plumas District can provide that service. Those overtures have led to some patients being cared for from out of the area.

Plumas District has partnered with the Mayo Clinic’s Allevant program, which is designed to help rural hospitals offer transitional care beds, which in turn helps alleviate overcrowding at large urban facilities. The program is for Medicare patients.

But, the local hospital’s long-term goal is to open a skilled nursing wing. Kepple said that not only is it needed in the area since Quincy’s long-term care facility closed, but it would benefit the hospital’s bottom line.

Kepple reported that the hospital has achieved its goal of reducing contract labor, going from an average of 24 personnel to eight. “Our goal was to reduce by 30 percent by April and we’ve done that,” he said. Contract labor is more costly than regular staff.

It was also announced that Dr. Ross Morgan would be seeing patients in the Indian Valley Clinic one day a month.

The hospital continues to take advantage of IGTs (intergovernmental transfers) to operate in the black. The funding is provided to help offset the hospital’s losses on care provided to MediCal patients, since the program’s reimbursements don’t cover the hospital’s costs.

“It’s a complicated business model,” Kepple said of the machinations required to obtain the money, including putting up matching funds. “I want to emphasize to the board and to the public that we are pursuing those supplemental payments.” The next such opportunity is in March and the hospital hopes to secure $2.6 million.

Year to date, the hospital has a net income of $825,075. And while that puts Plumas District in the black, Chief Financial Officer Caleb Johnson cautioned that revenues have declined, while expenses have increased.

“There is more reliance on IGTs,” Johnson said.

Looking at year-to-date statistics, the hospital has seen an increase in transitional care days from 241 through November 2017 compared to 124 through November 2016. During that same timeframe, surgeries decreased 32 percent. The use of radiology and lab visits also declined. Clinic visits increased to 1,809 from 1,598.