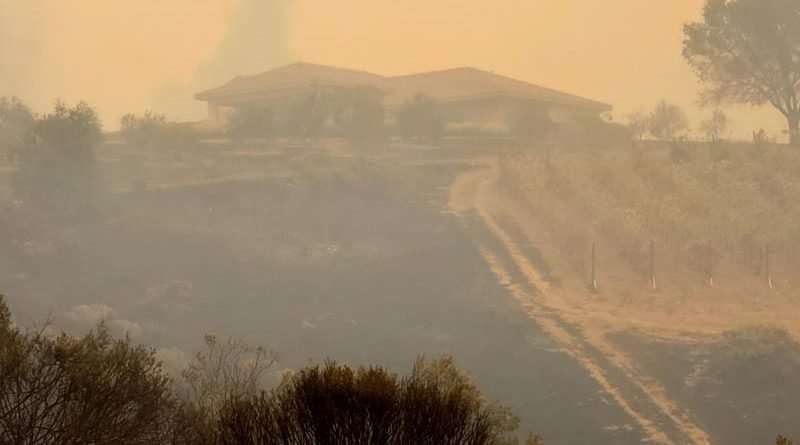 The strike team from Plumas County saved this home on Fitch Mountain near Windsor and Healdsburg from being destroyed in the Kincade Fire on Oct. 27. Photo submitted
News
October 30, 2019 Debra Moore, Managing Editor

Plumas engines and firefighters have joined the effort to fight the Kincade Fire in Sonoma County.

Nick Dawson, the county’s director of the Office of Emergency Services, said he received a request from the state OES on Saturday for a Strike Team of Type 1 (structure protection) engines to respond to the fire.

“I talked with Rubin Villa and he advised they saw and fought a lot of fire overnight,” Dawson said Monday morning. They estimated that they helped save at least 30 homes, some outbuildings, five vineyards and some equipment.

Dawson said he spoke with the county’s fire chiefs over the weekend and they “felt comfortable allowing these resources to leave the county and still have enough equipment and personnel to handle any situations that might arise.”

“I want to thank all the departments for getting back to me in a timely manner to help with pre-planning as it helped expedite the filling of the resource order,” Dawson said. “With that being said, I have advised CAL OES that Plumas County is tapped out and could not provide anymore resources without hurting our ability to adequately protect ourselves.”